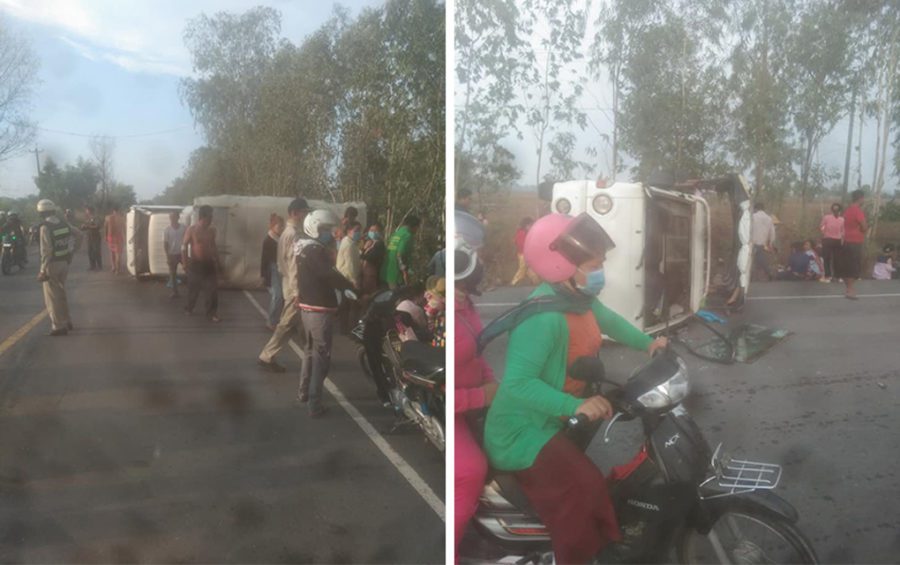 The scene of a truck crash in which 33 garment workers were injured in Takeo province’s Traing district on April 15, 2020, in this photograph posted to the Vanna News Takeo Facebook page.

More than 30 garment workers were injured, seven seriously, when a truck taking them to multiple factories flipped over in Takeo province on Wednesday morning, an official said.

The covered flatbed truck was transporting 33 people to work when it turned over on its side in Traing district’s Prey Sloek commune, said Kim Channarith, an official at the National Social Security Fund (NSSF) provincial office.

The injured workers were taken to the Takeo Provincial Hospital, including 26 who sustained minor injuries, Channarith said.

Citing conversations with workers who were sitting next to the driver in the front cabin of the truck when it crashed, the official said the vehicle’s steering wheel malfunctioned, which led to the accident.

“The vehicle’s steering wheel got stuck and could not move to the left or right, and while the vehicle was also traveling at high speed, it made the vehicle flip over, but it did not cause any worker deaths,” Channarith said.

Cambodia’s key garment sector employs about 800,000 workers who earn a minimum monthly salary of $190. Many travel to work each day in the back of trucks, often with dozens of people packed in and standing for the duration of the ride.

Last year, 50 garment workers were killed and nearly 2,000 others were injured in roadway accidents, according to a NSSF report, Chinese state news agency Xinhua reported in January. The death toll was up slightly from 42 killed in 2018.