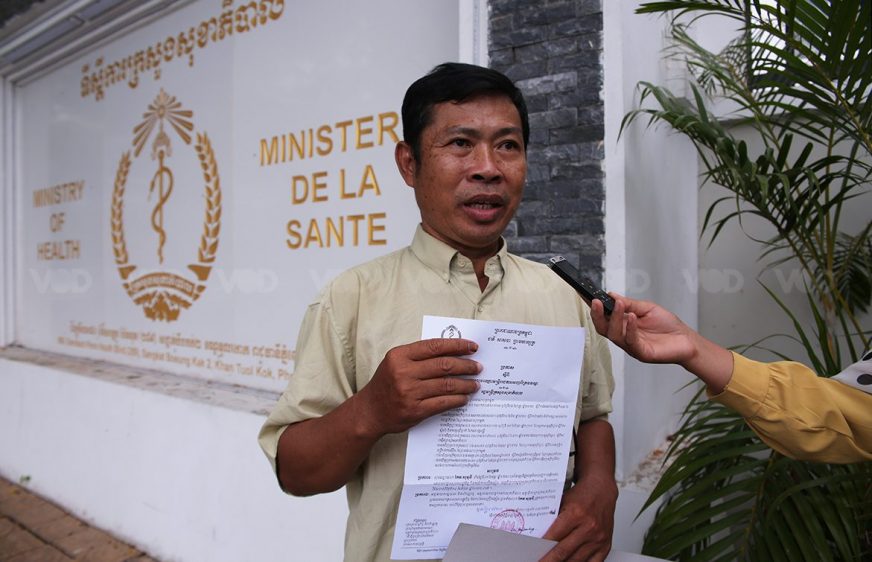 Keo Somony, the candidate for the second deputy commune chief of the Candlelight Party in the capital’s Chbar Ampov commune, requested the Ministry of Health review a decision to fire him. Somony went to the ministry to appeal his termination on Wednesday, June 22, 2022. (Hean Rangsey/VOD)

Two opposition officials have been fired from their state jobs after they stood for office in the recent election, according to documents shared by the Candlelight Party, though one said he had not yet been notified by their employers.

A Health Ministry decision shared by the party, dated Tuesday, said Keo Somony was removed from the department of mental health and drug abuse following a decision by a disciplinary committee. It did not specify a reason.

Somony stood as a second-ranked candidate for the Candlelight Party in Phnom Penh’s Chbar Ampov commune, he said on Wednesday, alleging the decision to fire him was political.

He said he had not been given a warning, but had been informed of his termination by his department.

“So I think this is 100% political discrimination,” he said.

Somony filed a letter to the ministry on Wednesday seeking a review of the decision.

Health Ministry spokeswoman Or Vandine said she had not received information about Somony’s purported dismissal, while another spokesperson, Hok Kim Cheng, could not be reached.

The second decision was signed by the Interior Ministry last week on June 16, according to an image shared by the Candlelight Party. The decision says Eng Srouy, a trainer at the police academy, was dismissed from the National Police because he had abandoned his work.

Srouy, who was head of Candlelight’s Tbong Khmum provincial working group, said he had only seen the decision posted online, but believed it was real and would not be returning to work. He denied that he had abandoned his work, saying he always showed up, though not necessarily every day. His home was far from work so he attended two or three days a week, he said.

“Yesterday I planned to go to work and then I saw the document, and I didn’t know who I should contact and my unit did not give the information to me,” Srouy said. “I don’t know what to do since it has turned out like this, and I have no need to demand or challenge it because it already happened.”

He added that he did not want to say that it was related to politics.

“This is a different issue,” he said. “As a journalist you know it — you know and understand deeply about this issue, and it is not difficult to understand. I would like to, as my right, not elaborate on the other issue. You know how the current situation is.”

Sam Kuntheamy, executive director of election non-governmental organization Nicfec, said the decisions should be clearly explained as they could amount to “political repression.”