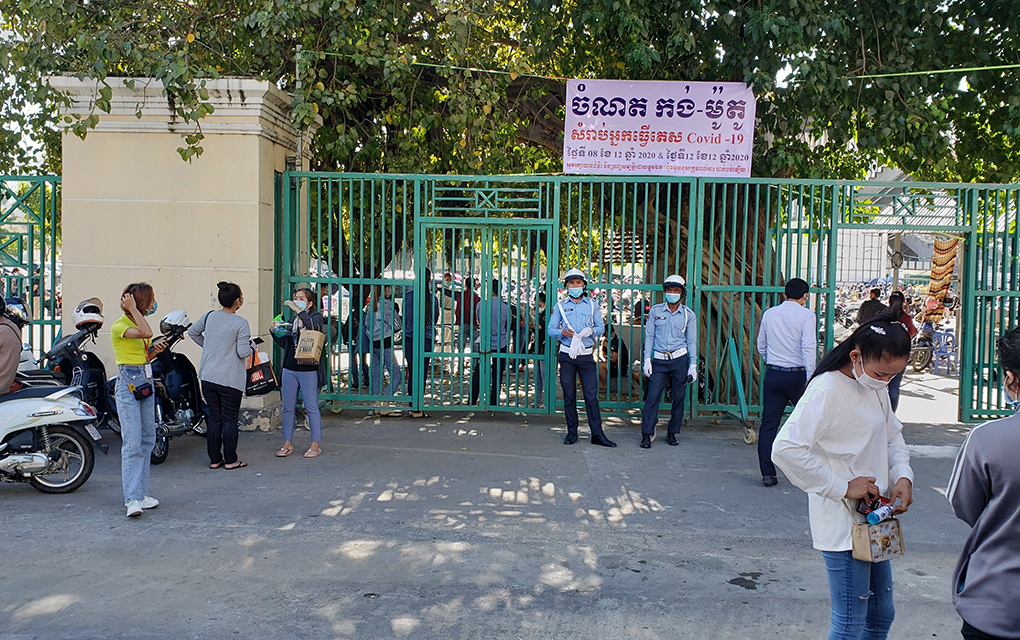 Masked police stand at the entrance of the Covid-19 testing center at Olympic Stadium in Phnom Penh on December 8, 2020. (Danielle Keeton-Olsen/VOD)

Two customers of fashion stores in Phnom Penh have tested positive for Covid-19, the Health Ministry said on Tuesday, bringing the total of patients in the “November 28” cluster to 34.

The ministry earlier also announced the government was halting its “sponsored” arrivals program that had allowed some foreign visitors to quarantine for just two days instead of two weeks.

In a statement on Tuesday, the ministry said it found two new cases of Covid-19:

In earlier statements, the ministry also announced that Canadia Tower, where a Bank of China employee who was found to have Covid-19 worked, would be closed until December 17, and that arrivals rules would be tightened.

All arriving passengers would need to quarantine for 14 days without exception, the ministry said, suspending a sponsorship program that had allowed some visitors to have a local guarantor and wait only two days in quarantine for test results.

It also asked all border authorities — including land, water and air — to more strictly control entry and quarantine.

The Education Ministry, meanwhile, said high school exams would be delayed from December 21-22 to mid-January, with the exact date to be confirmed.

The Interior Ministry, which has had at least five cases of Covid-19 in the “November 28” cluster, said it would close its offices for two weeks, with all civil servants expected to work from home.

The ministry said it “requests competent authorities to take legal action without notifying the Ministry of Information in advance,” while the spokesperson unit appealed to “the public, people, civil servants, armed forces, reporters and monks to be careful and join together to stop exaggerated information that is not from an official government source.”