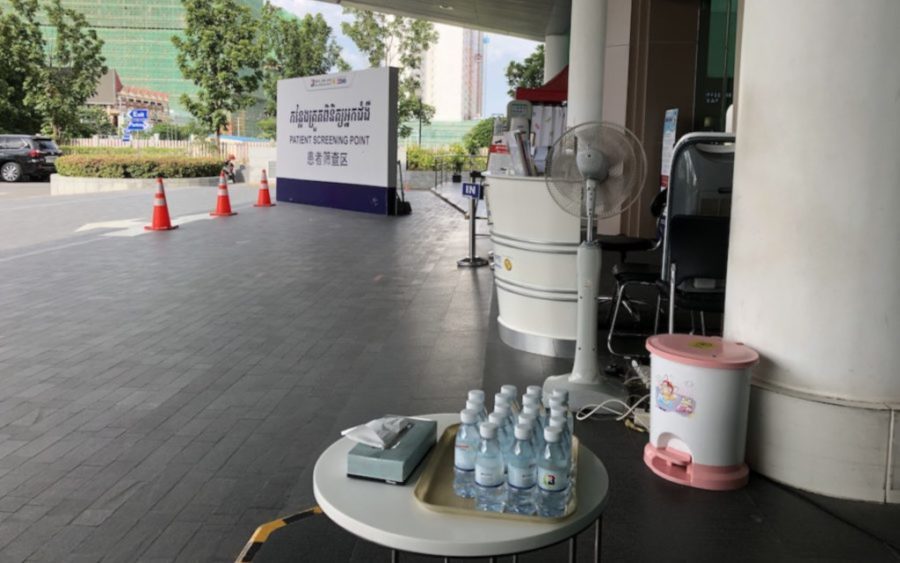 A patient screening point in the front of Royal Phnom Penh Hospital on July 28, 2020 (Matt Surrusco/VOD)

Two schools have been closed in Preah Sihanouk province due to Covid-19 precautions after a prime ministerial assistant visited three coastal provinces over the weekend despite being a suspected contact of a visiting Hungarian foreign minister who tested positive after leaving the country last week.

Authorities have also asked gyms to close nationwide, while about 25 people have gone into quarantine in Preah Vihear province — the eighth province outside Phnom Penh that now has suspected contacts of the visiting minister.

Peter Szijjarto visited Phnom Penh on November 3 without observing coronavirus safety procedures. He flew to Bangkok the same evening and then tested positive for Covid-19.

Many government officials did not wear masks in meetings with him, and have been asked to quarantine for two weeks. Four of Szijjarto’s contacts have so far tested positive, all on their second tests three to five days after their first tests.

The Health Ministry said on Tuesday that more than 1,100 have been tested as suspected direct or indirect contacts of Szijjarto, but declined to say how many people had come in for their second tests, with spokesperson Or Vandine saying it was “not important.”

On Wednesday, the ministry said it had conducted 365 further tests, for a total of 1,481 total samples tested in relation to Szijjarto’s visit. Based on the ministry’s figures, only a few hundred would have had second samples tested.

The ministry has asked suspected contacts to receive their third and fourth tests on November 14 and 18.

A statement issued by the Preah Sihanouk Provincial Education Department on Wednesday said Chumpou Khmao and Hun Sen Ream primary schools in Prey Nob district’s Ream commune would be closed for two weeks due to suspected contact with the Covid-19 cluster.

The closures are related to a visit by Doung Dara, an assistant to Prime Minister Hun Sen. Dara visited Preah Sihanouk, Kep and Kampot from around Friday to Sunday to look into land disputes despite being a suspected contact of Szijjarto.

Dara on Tuesday refused to answer questions, saying “some news is like sitting to blow smoke onto others” and claimed it would not benefit the nation.

Provincial spokesperson Kheang Phearum added that the province had 220 government officials suspected of contact with Dara — 16 of them direct and 204 indirect. About 40 of them have had samples taken for a Covid-19 test, Phearum said.

“When they don’t implement [quarantine], it can cause negative impacts to public health and risk in other places like schools and the general public,” Pisey said. “Our biggest concern is the risk of possible infection in the community.”

“There must be administrative punishment for those officials,” Pisey said.

Meanwhile, in Preah Vihear province, 25 people are suspected of direct or indirect contact to Szijjarto, according to the provincial health department.

Nine have been tested, and all 25 are in quarantine, the department said in a statement.

Kuong Lo, the department’s director, told VOD that about 10 people had gone to Phnom Penh to play petanque at Olympic Stadium.

One of the four people who have tested positive in the Szijjarto cluster is a bodyguard who also worked as a trainer at the stadium.

“They were concerned and worried and asked us if they could go into quarantine, and we allowed it,” Lo said.

The Tourism Ministry on Wednesday also instructed gyms and fitness centers around the country to temporarily close “for the sake of health.”

Hun Sen has also gone into quarantine and has tested negative twice. He has cautioned that officials’ wives have been “hugely careless” and have not followed quarantine requirements.