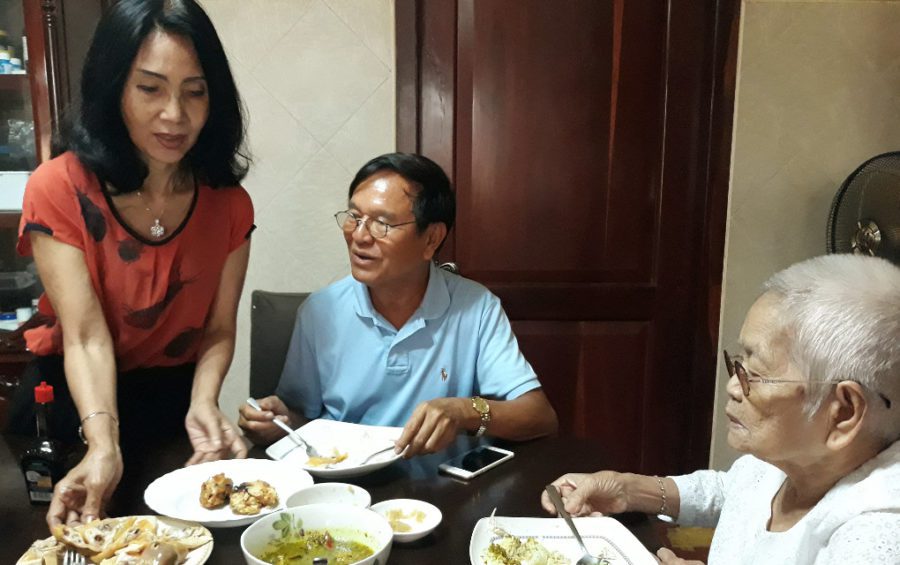 Kem Sokha (center), with his wife Te Chanmono (left) and his mother Sao Nget, at his Phnom Penh home the day after he was released from Correctional Center 3 prison in September 2018. (Chhea Bunnarith)

Accused by the government of plotting a “color revolution” with the aid of the U.S., he was arrested in a midnight raid on his Phnom Penh home on September 3, 2017, jailed for a year, and has since been placed under indefinite “judicial supervision.” Government critics say this effectively amounts to house arrest as Sokha awaits a trial with no scheduled date.

His movements have been restricted by court order to a narrow area around his house in Tuol Kork district, but his daughter, Kem Monovithya, said he had not even ventured that far.

“He has never left the house, as he’s not allowed to go beyond the red triangle,” said Monovithya, who was the public affairs officer for Sokha’s now-dissolved Cambodia National Rescue Party (CNRP).

“His everyday life involves meditation, planting vegetables, these are things he does to relax himself and of course he follows the news rigorously, so he’s very well informed and up to date on all that’s happening,” she said via message from Washington D.C., where she has been campaigning to drum up international pressure to secure his release.

Sok Len, a 37-year-old tuk-tuk driver who frequently plies his trade on Kem Sokha’s block, said he felt sorry for Sokha, who was “guarded by police day and night.”

He had never seen Sokha come out of the house, he said.

“My heart wants him back in politics. He is a good man and he got support from the people,” Len said. “He can help increase wages for workers.”

The situation did not seem right, he said, but he and others who were sympathetic did not feel they could do anything about it.

“They are afraid of being arrested. We can’t rise up. Those who dare to speak out are already arrested,” he said.

“The people can help him only via the ballot,” he said, before adding that he had boycotted last year’s general election due to the absence of the CNRP.

Two years since his arrest, with Western nations calling for his release, Sokha’s ongoing detention has kept him out of sight and out of mind, with supporters saying he has not been forgotten, but that they feel powerless to help him.

The Supreme Court dissolved the CNRP two months after Sokha’s arrest in response to a complaint from the Interior Ministry. One-hundred eighteen CNRP leaders were banned from participating in politics for five years, and the ruling Cambodian People’s Party — without competition from its main rival — swept the July 2018 election, winning all 125 seats in the National Assembly.

In Sokha’s hometown in Takeo province, Ban Sophea, 35, said she had not forgotten about Sokha, but two years later he was hardly someone to whom she gave much thought.

The mother of four said her concern was her family’s livelihood, not whether Sokha was facing an injustice or what the latest news about him was.

“We just know about his arrest,” Sophea said. “We don’t know how to help him.”

Attention on his case has come largely via statements issued by the U.S., E.U. and U.N., which have criticized last year’s election and the charges brought against Sokha. The European Parliament has called the legal actions taken against the CNRP “politically motivated,” and the bloc has moved to potentially suspend Cambodia’s duty-free access to its markets. Meanwhile, a U.S. bill tabled in the Senate demands “the immediate and unconditional release from house arrest of opposition politician Kem Sokha” and also proposes trade sanctions.

Am Sam Ath, monitoring manager for human rights group Licadho, acknowledged that the visible support for Sokha’s release within the country was small, but said his case was clearly important and not forgotten.

“We’ve seen that the campaign is not big, but he is remembered and the negotiations are mostly being done more outside the country than in the country,” Sam Ath said.

Any reticence among the Cambodian public could be due at least in part to authorities’ suppression of any signs of opposition to the government. Gatherings of former CNRP members have led to the questioning of at least 147 people by police or in court this year, according to Human Rights Watch. Meanwhile, the three-year anniversary in July of political analyst Kem Ley’s assassination saw two activists arrested, one for calling for an end to extrajudicial killings and another for printing T-shirts quoting the words of the late popular radio commentator. Others have been arrested for alleged political insults published on Facebook.

The relative quiet over Sokha so far has also stood in contrast to the high-profile agitations of party co-founder Sam Rainsy, who is living in exile in the relative safety of Paris.

The CNRP was founded in 2012 ahead of the 2013 national election as a merger between Sokha’s Human Rights Party and the Sam Rainsy Party. Rainsy, a long-time politician and one of the country’s well-known personalities, began as the party’s president, with Sokha his deputy. But amendments to the Political Parties Law in early 2017 banned parties led by anyone with a criminal conviction. Rainsy, who was convicted of several cases of defamation and more recently of inciting the armed forces and insulting the monarchy, stepped back in an attempt to save the party. He has called the convictions politically motivated.

But since Sokha’s arrest, Rainsy has stepped up as acting CNRP president and returned to the limelight. Alongside frequent provocations published on his Facebook page, Rainsy has repeatedly vowed to return to the country in an attempt to restore a political opposition to Cambodia. His latest promise for return is scheduled for November 9.

His Facebook posts have sparked widespread and wide-ranging reactions among his supporters, the ruling party, media commentators and other social media users.

Monovithya, Sokha’s daughter, said none of that changed who was the real leader of the opposition.

Sokha was the one who had led the CNRP to “unprecedented gains” in the 2017 local-level elections, she said.

“It’s also obvious to the international community that Kem Sokha is the opposition leader, hence they call for his release in the last two years,” she said.

Mu Sochua, a former party vice president and a close Rainsy ally, agreed that there was no confusion about who was leader.

“We never forget Mr. Kem Sokha, who is our president,” she said.

Criticisms of the opposition leader’s arrest as anti-democratic were mere opinion, Eysan said.

Instead, he drew a parallel to Khmer Rouge leader Pol Pot, who, following his ouster in 1979, continued to lead armed resistance against the newly installed government into the 1990s from near the Thai border. Despite reigning over the deaths of millions during the Khmer Rouge era, Pol Pot received support from China and the U.S., which objected to the Vietnam-led 1979 overthrow.

“Their criticisms are just their issues,” Eysan said. “The CPP hasn’t just gone through the Kem Sokha [situation], but the party also prevailed through Pol Pot’s time. It seems to be nothing to worry about.”

“We feel pity,” the mother of three said.

She preferred Rainsy, but Sokha did not seem to be someone who deserved his plight, she said.

Sokheng said she hoped his trial would start soon to finally put the case to rest — and to finally find out what he was even alleged to have done.

Sokha’s treason case for “conspiring with a foreign power” appears thus far to rest on a speech he gave in Melbourne in 2013.

According to the government’s transcript of a video of the speech, published on Facebook by the Council of Ministers’ press unit, Sokha says he has been assisted by the U.S. since his foray into politics in 1993, and in recent years was advised to follow the model of Yugoslavia, which deposed President Slobodan Milosevic in 2000 through grassroots demonstrations.

Justice Ministry spokesman Chin Malin said any advancement in Sokha’s case — including the possibility of his release from home detention — was entirely up to the courts.

“His case is still under an investigation stage, so it’s up to the investigating judge to decide when the case will be closed,” Malin said.

However, Meng Sopheary, one of Sokha’s lawyers, said she believed only political talks could make way for her client’s “full freedom.”

“We have requested his charge to be dropped four times already but the result has always been negative,” Sopheary said.

“I think this case is more related to political issues rather than legal procedures, so only politicians can seek a solution among themselves. It’s better not to rely on us who are dealing with the case according to legal procedures.”