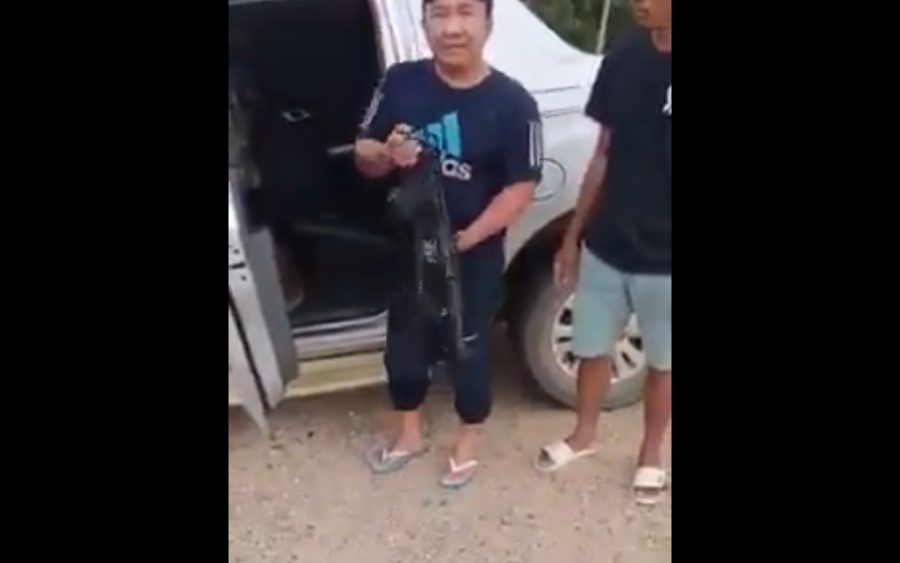 Nhek Phal holds up an AK-47 assault rifle during a traffic altercation in Kampong Chhnang province on August 31, 2020, in an image taken from a video filmed by a passenger and shared on social media.

After a minor traffic incident, the son of a tycoon brandished an AK-47 rifle he later claimed to have picked up in his father’s sugarcane plantation, according to police.

Police arrived at the scene in Toek Phos district’s Kbal Toek commune and arrested Phal, taking him to the police headquarters — but Sam Ban had already left, it said.

“Nhek Phal said in a confession that the AK-47 was found in a field while he was plowing in order to grow sugarcane,” the statement said. “He cleaned it up and polished it.”

A video taken by a passenger on Sam Ban’s motorbike was widely circulated online. In it, Phal can be seen arguing with Sam Ban.

“You drive carefully and don’t talk back to me. I don’t have the right to shoot people,” he says in the video as he takes out the assault rifle from his car, “but I’m just telling you to drive carefully.”

Kampong Chhnang provincial police chief Khov Ly told VOD on Tuesday that officers were questioning Phal and he would be sent to court to potentially be charged.

Phal had previously been jailed two or three times, Ly said, but would not elaborate.

“He was driving his car and collided with the motorbike,” Kosal said. “[The two] argued with each other and [Phal] pulled out his gun.”

It was important that Phal be held accountable to stem impunity for those with connections, Chankea said.

“His action is illegal. The authorities must stop this from becoming culture,” he said. “When there are small issues and [people] cannot find a way to resolve them except by using weapons or connections … innocent poor people will become the victim.”