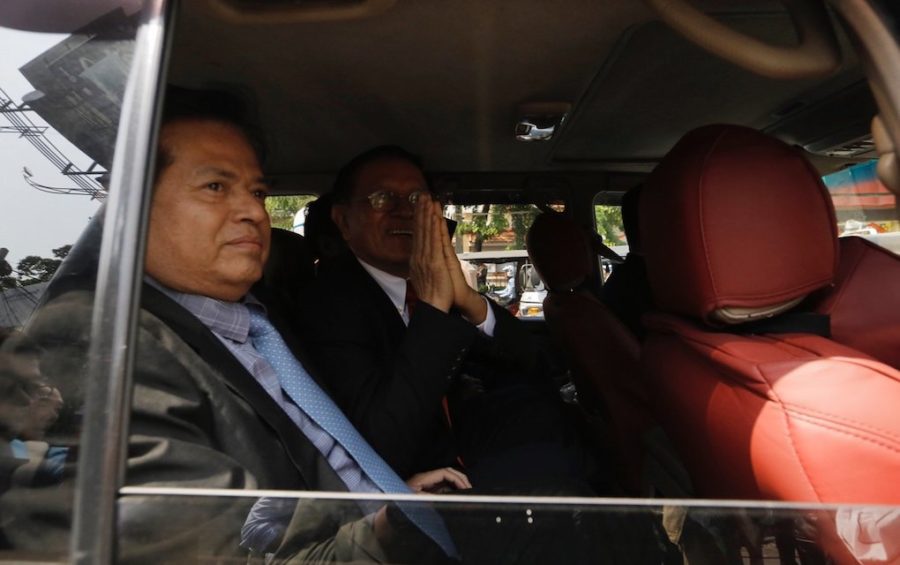 Kem Sokha, president of the dissolved opposition CNRP, gestures from inside an SUV as he drives away from the Phnom Penh Muncipal Court on January 15, 2020. (Panha Chorpoan/VOD)

U.N. representatives issued a statement on Friday calling the trial of Kem Sokha, the leader of the outlawed opposition, “tainted by irregularities,” and criticized his arrest without a warrant, arbitrary detention and the lack of public access to trial proceedings.

The statement, issued by three U.N. special rapporteurs — on human rights in Cambodia, freedom of expression and judicial independence — came after the Phnom Penh Municipal Court held the first two days of Sokha’s treason trial on Wednesday and Thursday, more than two years after his arrest. Sokha was arrested in September 2017 and charged with conspiring with a foreign power.

The U.N. statement said Sokha’s arrest disregarded his parliamentary immunity, he was denied access to a lawyer early in his detention and he was held longer than legally permissible in pretrial detention.

The three rapporteurs, Rhona Smith, David Kaye and Diego Garcia-Sayan, added that the lack of public access to the courtroom — which was limited mostly to members of the diplomatic corps — puts into question the trial’s fairness.

Government spokesman Phay Siphan and Justice Ministry spokesman Chin Malin could not be reached for comment late on Friday.

The Foreign Affairs Ministry and Cambodian Mission to the U.N. Office in Geneva said in similar statements dated Friday that they regretted the U.N. rapporteurs’ statement, calling it “politically motivated,” and “totally intending to mislead the public” about Sokha’s trial proceedings.

Meanwhile, representatives of Belgium, Germany and the E.U. on Friday joined calls to allow the public, journalists and rights monitors to enter the courtroom.

A day earlier, France said it believed the hearing should be open to the public, while a U.S. Embassy spokesman said the U.S. had been urging the court to allow media and civil society members into the proceedings.

Germany and the E.U. issued nearly identical statements to VOD on Friday, saying that they believe the hearings should be open, and E.U. members “encourage” the court to allow media and civil society organizations access.

The Belgian Embassy in Bangkok said in an email that the E.U. would “plead with the government to allow journalists and CSOs to observe the trial.” Contradicting other reports, it also said “the courtroom was full during the morning session” on Wednesday.

Among foreign missions that replied to VOD’s inquiries, the embassies of Japan and New Zealand avoided taking a direct stand on the issue of opening up the trial to rights monitors, journalists and the public.

A spokesperson for the New Zealand Ministry of Foreign Affairs and Trade confirmed in an email that a diplomat from the country’s embassy in Bangkok had attended the first day of the trial, and that “New Zealand values the principles of an impartial, fair and transparent judicial system. These are values we promote in our international relationships.”

The Japanese Embassy’s Suzuki Hironori said on Thursday that embassy staff attended the hearings on Wednesday and Thursday to “gather information as part of our work,” but declined to comment further.

On Thursday, Malin, the Justice Ministry spokesman, said journalists were free to interview lawyers once they came out of courtroom hearings.

“It will be very clear and in detail about the procedure of the case. If you are attending yourself, you may not understand much about the court’s processes and procedures, as it is a lot of legal aspects,” Malin said.

He earlier said that the courts had neither the space nor equipment to allow more observers to view the proceedings.

More than 80 organizations, including rights groups Adhoc, the Cambodian Center for Human Rights and Licadho, issued a statement on Thursday urging the government to allow family members, civil society groups and journalists to observe the trial. It said some seats were left empty in the courtroom on Wednesday.

The statement was also signed by the Cambodian Center for Independent Media, VOD’s parent organization.

Updated on January 18 with a statement from the Foreign Affairs Ministry responding to the U.N.