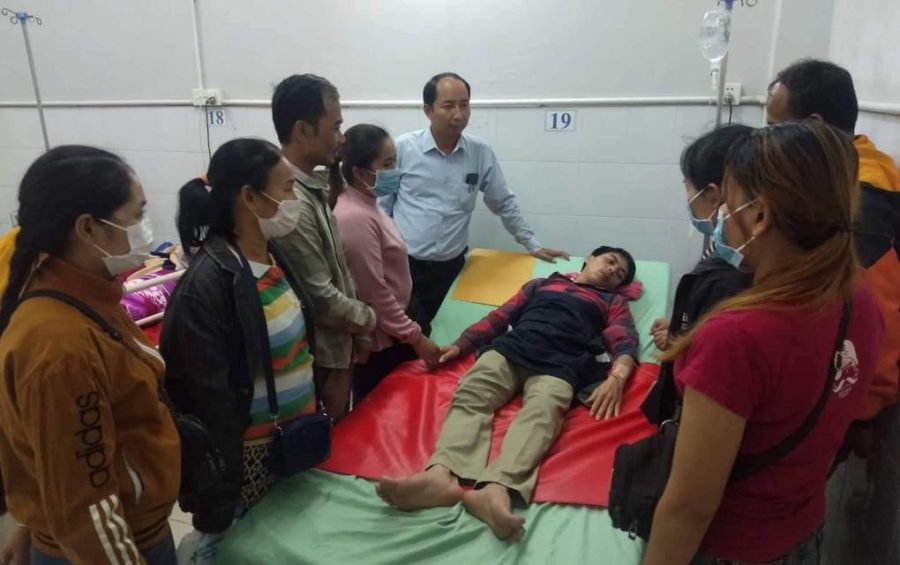 Union leader Ath Thorn visits unionist Soeung Pros in a hospital, in this photograph posted to the Cambodian Labor Confederation’s Facebook page on February 11, 2020. Pros was attacked by five unidentified men outside the Phnom Penh factory where he works on February 10.

Soeung Pros, deputy president of the Coalition of Cambodian Apparel Workers Democratic Union’s (CCAWDU) chapter at the W&D garment factory, was hospitalized on Monday after the daylight assault in front of the factory in Meanchey district, according to a union statement.

“CCAWDU would like to condemn the perpetrators and the accomplices, and ask all related authorities including the court to clearly investigate the case to find justice for the victim,” the union said.

Pros, who has led union protests in the past, was attacked from behind during his lunch break by a man wielding a belt and four others. The unionist was knocked to the ground and sustained cuts to his head resulting in three stitches, the statement said.

He is being treated at the capital’s Khmer-Soviet Friendship Hospital.

Hun Sen had earlier called workers’ demands and related strikes “illegal.” More than 1,000 workers were fired in January 2019 for striking after the company had declined to pay seniority bonuses that workers claimed they were owed.

Pros told VOD that while one man beat him with the metal buckle of a belt, another holding a metal bar stood nearby, but didn’t attack him.

All five men wore surgical masks covering their faces. After the beatdown, they drove away on two motorbikes, with the drivers also wearing helmets, he said.

Pros said he wasn’t sure who would attack him, since he had never had an argument with anyone.

“I don’t know how to draw a conclusion because I am just a workers’ representative,” he said.

Em Pheary, police chief for Steung Meanchey III commune, said authorities received information about the case on Tuesday and were looking into it, including checking if there were cameras at the scene.

“We need the victim to clarify so it is easy for authorities to investigate. If we don’t cover all bases, how can we investigate?” Pheary said.

Cambodian Labor Confederation president Ath Thorn said police were “skilled enough” to arrest the assailants by checking footage from nearby surveillance cameras that could be used as evidence.

He considered the assault against Sros just another threat against the apparel workers’ union stemming from Sros’ previous protests and defense of workers’ rights at the W&D factory.

“It is another unjust act,” Thorn said. “If violence happens, it affects the government’s effort in improving the condition of labor rights in Cambodia.”