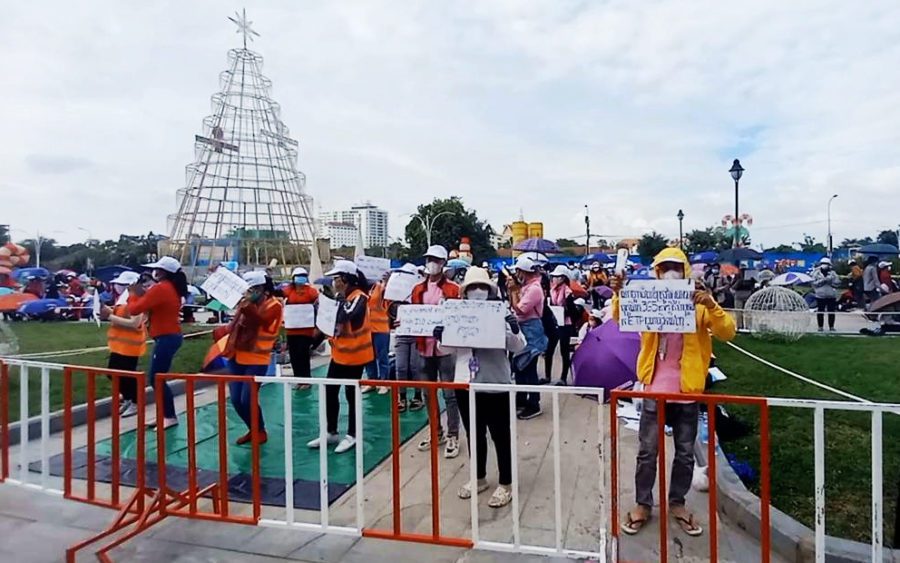 A strike continues outside NagaWorld on December 24, 2021. (Andrew Haffner/VOD)

As a strike at Phnom Penh’s monopoly casino enters its second week, NagaCorp will take into consideration the workers’ demand to reinstate nearly 300 employees, including top union leaders, a union representative said on Friday.

Workers vowed to continue striking over mass redundancies that have targeted union representatives, as the union said this week’s meetings between fired casino employees, the company, city officials and the Labor Ministry had yielded no immediate results.

Labor Rights Supported Union secretary Chhim Sokhorn said the company had initially declined to reinstate 276 of more than 1,300 fired workers who still rejected termination. But on Thursday, a company representative had said they would discuss the matter with the corporate board and inform them later of the decision, Sokhorn said.

She added that the company and state officials have been receptive about finding a settlement for 85 workers still negotiating on compensation, with the Labor Ministry asking for their names. But the union wanted reinstatement first, she said.

The workers’ protest began last Saturday over the termination of 1,329 workers in a year when the Phnom Penh casino, which has an exclusive license in the city, was forced to suspend operations for months due to Covid-19. Among the workers targeted for redundancy, however, is the entirety of the union leadership, according to labor groups.

The union has argued that dismissals of labor leaders were only legal in the case of serious misconduct. The Labor Law lists among serious offenses theft, fraud, assault, incitement and political activities in the workplace. The Trade Union Law says leaders, vice leaders and secretaries of workers’ unions are protected from dismissal unless there is “authorisation from the Labour Inspector.” The case has reached the Arbitration Council, but it has avoided making a ruling and passed on the decision to labor inspectors.

On Friday, upwards of 400 strikers gathered again on the strip of road median parkway across from the original NagaWorld casino-hotel complex. Strikers huddled under a display of Christmas lights set up by the casino, occasionally breaking into chants, cheers and bursts of song with their usual backing from megaphones and homemade noise-makers.

They remained under the close watch of police and security guards from both the company and the district. But unlike earlier days of the strike, police gave the crowd space, watching from afar.

As on previous days, the strikers kept tightly organized, gathering their trash as they prepared to leave the site at the end of the day.

Workers said they would keep up the action.

“We will continue to go on strike until there is a solution,” Sokhorn, the union secretary, said.