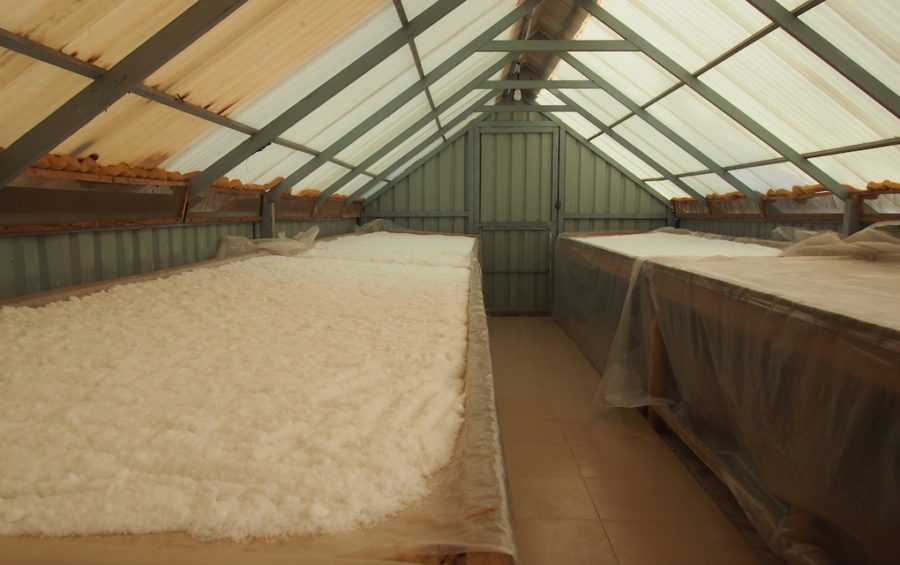 Salt lays out to dry in a greenhouse at Thaung Trading Company’s processing laboratory in Kampot province in September 2019. (Danielle Keeton-Olsen/VOD)

But when Thaung registered her company, Thaung Trading, last year with plans to begin exporting salt abroad, she ran into an unexpected issue: Climate change is shifting the weather cycle in inestimable ways, and Kampot — a province that generated 140,000 tons of salt in 2016 — produced almost no salt last year, according to Thaung.

“Sometimes it will seem like we can do it, but suddenly the rain comes,” she said.

Salt has been a staple of Cambodia’s coastal economy for a thousand years, but changing weather patterns and rising sea levels — attributed to global warming and the fluctuations in seasons that result — are making the future of the industry less certain.

Surrounding the provincial capital’s small delta where the Kampot River meets the Gulf of Thailand, natural salt fields occupy the spaces between mountains and rice paddies. Salt is convenient to produce when the country is too dry for rice cultivation.

In late October and November, the flatlands transform to ponds, perfectly portioned into squares, as salt producers set up irrigation systems and flood the fields with salt water to begin the process. The water evaporates throughout Cambodia’s dry season, leaving the salt to crystallize in the heat.

The end of 2017 and early 2018 left no chance for that process to happen. Thaung’s father, Bun Narin, who has been producing salt annually since the government restarted production in the province more than three decades ago, said the rain throughout the 2018 dry season was unprecedented. Narin said the two provinces did not record any salt produced because the yields were so low. From his fields, he harvested just 100 tons of salt, far below the average of a few thousand tons. The persistent rain through this year’s dry season has left him unsettled.

“We’ve been involved in salt production since 1987 but only in 2018 there was no salt because of the rain,” Narin said. “We don’t know what happened for the last three years.”

The Changing Seasons Are Straining Salt

In a good season, Pov Son, chief of Troeuy Koh commune and a salt producer himself, could earn $10,000 in revenue selling about 2,000 tons of salt harvested from his 20 hectares of land on an island within Kampot city limits. But as the harvest season drew to an end this month, he had only collected about 2,000 bags of salt, equal to approximately 100 tons. This year’s dry season did not reach the 779 mm of rainfall recorded in 2018, but the sporadic rain cut the salt yields of Son and other producers dramatically.

“I lost 30 to 40 percent more of my profit after the cost of workforce, petroleum and maintenance,” he said.

Even if the regular monsoon season returns next year, rising sea levels present an additional burden to salt producers. Narin said that in the past three years, the fields, which are about 30 to 40 cm above sea level, are increasingly prone to flooding during a high tide, overwhelming the dikes and dams that used to prevent floods.

Last year, in addition to losing almost all of their harvest to heavy rains, he said high tides destroyed about 5,000 metric tons of salt stored in huts next to the fields.

Cambodia’s agricultural sector is considered highly vulnerable to climate change, and GDP has already taken an estimated $1.5 billion hit in 2015 alone due to climate change, according to a USAID report released this year. Because the sector — particularly rice cultivation — is highly dependent on cyclical rainfall, climate change’s impact on the rainy season is estimated to cause agricultural losses of $100-$170 million a year, if no adaptation methods are introduced.

The diminished harvests are pulling producers away from an industry that dates back to the Angkorian era.

Narin, who also served as technical chief for the Salt Producers Community of Kampot and Kep, said evidence of salt production first appeared in old histories, but the production took off in the region throughout the 1940s and 1950s.

The government took over salt production during the Khmer Rouge’s rule in the 1970s and the chaotic civil war period that followed. In 1986, Narin and a group of Kampot residents petitioned the government for the ability to produce salt as private entrepreneurs, and they granted the new producers 50 hectares of land and permission to establish the industry. Today, there are about 200 natural salt producers in Kampot and Kep.

Even when the weather is fair, traditional production of natural salt is a risky industry for its reliance on the weather, compared to factory salt. In 2014 and 2015, Kampot’s lengthier dry season allowed producers to supply more than enough sea salt to fill the country’s demand for 80,000 to 100,000 tons annually.

Factory-produced salt, which is mined from the ground and then bleached and iodized in China or Vietnam, sells for an average of 1,260 riel (about $0.30) in the local markets, compared to about $2 per kg for Kampot natural salt. Because it’s pulled from the ground and processed in a factory, the imported salt lacks dozens of minerals that are found in natural salt, although both products are shown to have the same nutritional value.

This year, Cambodia already imported about 50,000 tons of salt from China, and with a lower than average harvest, Narin expects Cambodia to import more to feed the country’s demands.

The 2018 harvest cycle marked a turning point for many natural salt producers.

According to Narin, about 20 of the 200 producers have given up production after the two dismal seasons. In addition, the local salt producers’ association has dissolved because between 60 and 80 producers decided not to maintain their memberships this year.

“Some farmers or producers are unhappy with climate change because they lost their money during the production but they cannot harvest,” he said. “They are unwilling to do more.”

Now that Kampot’s salt industry seems to be drying up, local producers are considering alternatives. Commune chief Son noted that many have sought jobs in garment factories and other farms to recuperate revenue lost to the salt fields.

But the biggest temptation is to list their land for sale and abandon the industry, producers said.

“If we cannot produce salt, we have no livelihood,” said Arm Som At, who owns 7 hectares of salt fields and coaches a youth football league.

“Most of us here want to sell our land,” Som At added.

He said there used to be 70 families producing salt in his commune, but they sold their land to bigger producers and took jobs in garment factories instead.

Kampot and Kep are experiencing their own swell in land prices, as both foreign and domestic investors train their gaze toward Cambodia’s coasts. Stretches of land near creeks and the coast can go for up to $250 per square meter, according to the Phnom Penh Post, so salt fields are enticing properties for their proximity to water. Earlier this year, a group of Japanese businesspeople met with Kampot tourism officials to propose a resort development on 40 hectares along Troeuy Koh commune’s coast, the Khmer Times reported.

However, Kampot and Kep salt producers would be blocked from taking advantage of these land sales. The Ministry of Industry and Handicraft in 2017 blocked salt flats from serving any other purpose than producing the seasoning in order to protect the industry.

Narin said that a few producers tried to sell their land and capitalize on it, but they can only sell to people who are able to produce salt.

Sok Kemchoeun, director of the Kampot provincial department of industry and handicraft, sees potential in technology to shift salt production. He said he had suggested to the national ministry to provide machines that could dry the salt further after the first few weeks drying in the sun. However, he admitted that the machines would be expensive, so the idea was speculative.

According to Son, his constituents in Troeuy Koh commune are trying to petition the government to allow them to sell about 60 percent of the salt land so that the residents can earn some money. But the commune chief said he was split between wanting new coastal developments and preserving the salt industry.

“It’s normal that any project has its [environmental] impact,” he said. “At the same time, it brings benefits to the residents. They don’t need to leave home for a job outside the commune.”

Narin, the long-time salt producer, was adamant about keeping the traditional practices alive, but said he could consider some small innovations that might minimize producers’ chances of losing a crop.

For instance, his daughter, Thaung, is considering the use of solar panels to cover the salt from rain. However, this and other technological solutions would be expensive. And regardless of whether they add solar panels to their land, Narin said the company needs a small- and medium-sized enterprise loan for business expenses and to ensure the company survives low seasons.

“We are trying to find the solution but we cannot find a solution which can produce [natural] salt without depending on the weather,” he said.

The changing seasons are a grave concern for Thaung, who is trying to convert the family business into a social enterprise geared toward the international market. She is working to organize other natural salt producers into a collective, so she can train people in high-quality salt production, and therefore offer them a better price than the market allows, at about $3-5 per kg of unprocessed salt.

Thaung sees international buyers taking an interest in natural salt, and she’s encouraged by organizations like Slow Food, which recently recognized Kampot and Kep salt for its quality and ethical treatment of workers. Exporting salt could have been a solution to excess production in 2015 and 2016, but climate-disturbed weather patterns could throw her business plans to the wind.

A few years ago, the company had more stores of salt than it could sell, Thaung said.

“But once we were doing a lot of promotion, marketing and so on, and then … climate change starts, the rain starts, it’s another problem for us.”