US Ambassador Who Warned of Khmer Rouge Dies at 93 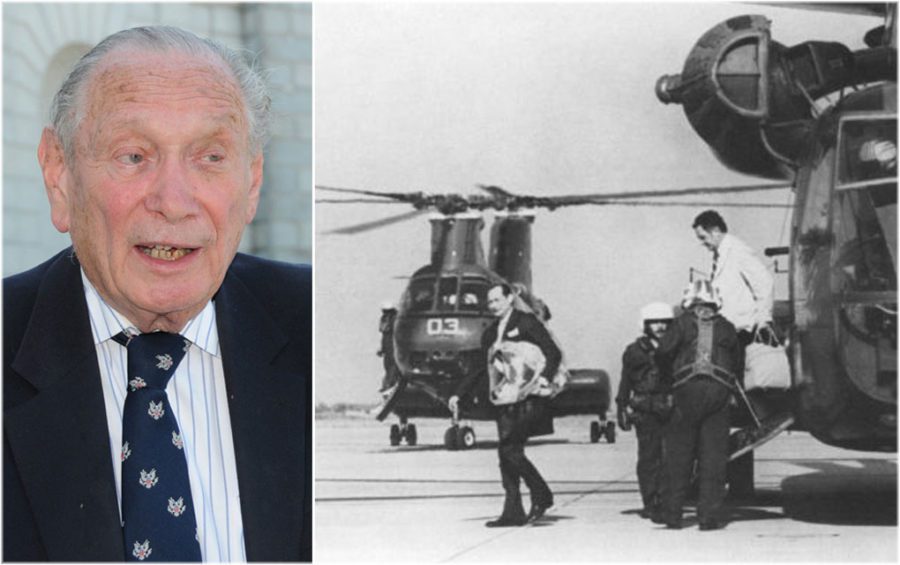 John Gunther Dean, the U.S. ambassador in Phnom Penh in the lead-up to the Khmer Rouge’s 1975 takeover and a career U.S. diplomat who blamed his own country for giving up Cambodia to Pol Pot, died last week. He was 93.

Dean died on June 6, according to an obituary notice in The Washington Post. He was the ambassador from March 1974 until the U.S. evacuation of Phnom Penh in April 1975, five days before the takeover by the Khmer Rouge.

He later served as U.S. ambassador to Thailand between 1981 and 1985, when the U.S., China and Thailand supported a coalition of three armed resistance forces including the Khmer Rouge as they fought from bases along Thailand’s border with Cambodia against the Hanoi-backed regime that replaced Pol Pot.

Dean said in interviews in recent years that he regretted that America in 1975 had broken its promises to defend Cambodia. It instead left the country to be taken over by the invading Khmer Rouge communists, once the U.S. Congress declined to continue approving military aid necessary to prevent Phnom Penh’s fall, he said.

“We’d accepted responsibility for Cambodia and then walked out without fulfilling our promise. That’s the worst thing a country can do,” Dean said in an interview with the Associated Press in April 2015 — 40 years after the April 12, 1975 U.S. evacuation. “And I cried because I knew what was going to happen,” he said.

An estimated 1.7 million people were killed during the Khmer Rouge’s rule over Cambodia between 1975 and 1979. In 1979, the invading Vietnamese ousted Pol Pot’s leadership and created a new regime led by a breakaway faction that included present-day Prime Minister Hun Sen as foreign minister.

Chhang Song, the information minister under Lon Nol’s regime and later an anti-Khmer Rouge campaigner and a senator for Hun Sen’s Cambodian People’s Party (CPP) in the 1990s, wrote in April 2014 that Dean had upon his arrival in March 1974 immediately identified the regime as on the verge of collapse.

“John Gunther Dean … correctly diagnosed the major causes of weakness on the government’s side and sought to convince the government to take the necessary steps to gain popular support and win, likewise, the support of the U.S. Congress, which was vital to gaining the funds needed,” Song wrote in The Cambodia Daily.

“A request was submitted for $222 million in U.S. aid to feed the population [in Phnom Penh], which had grown from a mere 200,000 in pre-war time, to some three million; and to carry the war into the rainy season when the fighting became bogged down,” he wrote. “At that point, negotiation would become more of a possibility.”

Dean’s request for the extra $222 million to stop the rise of the Khmer Rouge was considered “excessive” by many in the U.S. at the time, war-weary from Vietnam, according to a report in The New York Times from February 1975.

“It is not an exaggeration to say that this is a matter of survival for the non‐Communist side in this war,” Dean was quoted as saying.

As the Phnom Penh regime teetered toward collapse, the ambassador reportedly tried not only to acquire the $222 million in aid but also to convince then-U.S. Secretary of State Henry Kissenger to support his last-minute plans to convince Prince Norodom Sihanouk to break with Pol Pot’s communists and return.

The Khmer Rouge were at the time backed by the communist parties of both China and Vietnam, who financed and trained its leaders. They were given legitimacy after the were joined by Prince Sihanouk upon his ouster from power in the March 1970 coup d’état led by Lon Nol. (Hun Sen, among many other former Khmer Rouge, claims to have only joined the movement upon appeals from the prince.)

Yet Dean was said to be often disappointed by a lack of response from home.

“I must state very frankly that the Khmers of this side are waiting, and waiting desperately, for us to get involved,” Dean wrote in one of his messages to Washington D.C. according to a 2015 Voice of America article based on cables released in 2007. “What they must be wondering is what is holding us back?”

“They certainly are not holding us back, and if they are not, who or what is? I must say I do not have the answers to these questions,” he wrote.

Even though the case for the $222 million was taken up by U.S. President Gerald Ford, the aid for Cambodia was ultimately rejected by the Democrat-controlled U.S. Congress, which refused to approve the aid — reportedly rejected due to a “credit gap” about how much help Cambodia in fact needed from America.

By April 10, Ford said in an address to the U.S. Congress that it was probably “too late” to save Cambodia, even if his request for the aid was finally accepted. One week later, the Khmer Rouge took Phnom Penh to complete their takeover.

“Although U.S. President Gerald Ford was committed to providing the Khmer Republic with that aid, it was uncertain that the U.S. Congress would support Ford,” Song wrote in his 2014 piece on the last days of Lon Nol’s regime. “A war-weary American public and their Congress had had enough of Indochina.”

Dean’s views on U.S. foreign policy choices in 1975 were shared by the top members of Lon Nol’s regime — most infamously including Prince Sisowath Sirik Matak, one of the key figures in the 1970 coup and a top leader afterwards.

In a final letter to Dean declining a U.S. invitation for an airlift out of Cambodia, Prince Sirik Matak, who was marked as one of the “Seven Traitors” of the regime and among those executed by the Khmer Rouge at the Cercle Sportif, which is the location of the present-day U.S. Embassy in Phnom Penh, decried the U.S. betrayal.

“As for you and in particular for your great country, I never believed for a moment that you would have this sentiment of abandoning a people which has chosen liberty. You have refused us your protection and we can do nothing about it,” Prince Sirik Matak wrote to Dean on April 12, 1975. “You leave us and it is my wish that you and your country will find happiness under the sky.”

“But mark it well that, if I shall die here on the spot and in my country that I love, it is too bad because we are all born and must die one day. I have only committed the mistake of believing in you, the Americans,” the prince wrote.

Kissinger notably claimed the method the Khmer Rouge used to kill the prince was particularly brutal. In his 2003 book Ending the Vietnam War: A History of America’s Involvement in and Extrication from the Vietnam War, Kissinger wrote that “Sirik Matak was shot in the stomach and left without medical help.”

“It took him three days to die,” he wrote.

Born in February 1926 to a Jewish family in Breslau, Germany (now Wrocław in Poland), Dean’s family fled Nazism and arrived in the U.S in 1938, settling in Kansas City. He studied at Harvard University, served in the military during World War II and had his first diplomatic posting as U.S. chargé d’affaires to Laos in 1972 before moving south to serve as ambassador in Phnom Penh in 1974.

He was portrayed by Ira Wheeler in the 1984 Roland Joffé film The Killing Fields, which won three Oscars and helped bring to international attention the plight of Cambodia in the wake of the Pol Pot regime’s murderous rule until 1979.

Spalding Gray, who played a military attache and aid to Dean at the U.S. embassy in the film, later wrote in Swimming to Cambodia — a 1985 book based around the production of the film in Thailand — about feeling “intimidated” as he and Wheeler met with Dean, who was then the U.S. ambassador in Bangkok, during filming.

“I had met politicians but never a statesman,” wrote Gray, who himself died in 2004. “And he was a true statesman, a combination of a ship’s captain, say of the Q.E. II, and a boarding school principal, say, of Phillips or Andover academy.”

Song, the information minister under Lon Nol’s regime, said in a message he had been in the arrival party for Dean in Phnom Penh in 1974 and took an immediate shine to the new ambassador. But he said Dean arrived too late in Cambodia’s descent into communist rule — even if he refused to give up until the very end.

“I think John Gunther Dean was one of the very few Americans who knew the thinking of the Khmer, our strength and our weakness,” Song said. “He once called the entire Cambodian cabinet for a frank discussion at his house. His assessment was candid and his advice was very useful, but it was already very late.”