US and China Squabble Over Impact on Cambodia 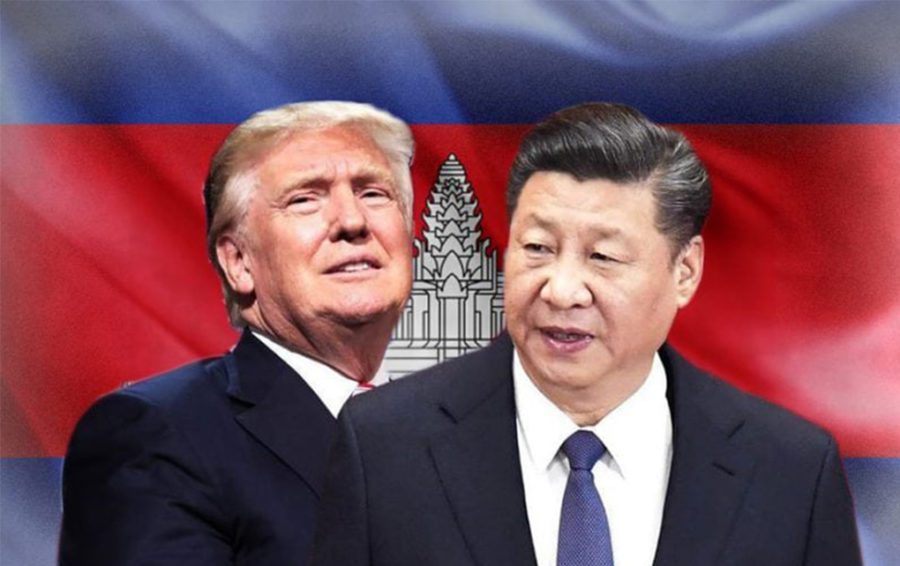 President Trump and Xi as The Phnom Penh embassies of the U.S. and China exchanged war of words over trade business with Cambodia. (Photo/FB)

The Phnom Penh embassies of the U.S. and China — whose governments have a dubious history of destabilizing Cambodia for their own geopolitical ends and both stoked and prolonged the country’s two-decades-long civil war — have become embroiled in their second Internet flame war over the country this year.

Seemingly roused by their high-profile Facebook tit-for-tat earlier this year in which they publicly quarreled about which government played the more instrumental role in Cambodia’s descent into its bloody quagmire from March 1970 to October 1991, diplomats at the embassies last week moved to the issue of imports.

As before, the war of words was started by the U.S. Embassy.

In a post to Facebook on April 19, the U.S. Embassy bemoaned Cambodia’s reliance on Chinese imports and suggested that it placed the country in hock to region’s biggest economy — even while its exports to the U.S. spur development.

“China is Cambodia’s largest trade partner, but this relationship is heavily skewed in China’s favor,” the U.S. Embassy wrote as part of its “#fullpictureKH” campaign, which is seemingly aimed at winning hearts and minds amid China’s rising power.

It included a graph showing the large amount of Cambodian exports to the U.S.

“About 87% of trade [with China] are Chinese imports, which do not support jobs or industry in the same way Cambodia’s trade relationship with the United States or EU does. This is just one more way Cambodia has shifted from a more balanced and diverse economic approach to one more dependent on China,” it said.

Cambodia imports very little from the U.S. each year. However, about 20 percent of exports head to the world’s biggest economy, which has threatened to revoke Cambodia’s trade privileges unless human rights concerns are rectified.

In response, the embassy of China — whose government funded and armed the rise of Pol Pot’s murderous Khmer Rouge in the 1960s and 1970s and supported the despot’s guerilla movement against Prime Minister Hun Sen’s regime for 12 further years after its January 1979 fall — accused the U.S. of disingenuity.

“The US is trying to stir things up again with the so-called trade deficit issue,” the post said, arguing that it was “common sense” for a small country like Cambodia to import many “textile raw materials” from China given its smaller economy.

The approximately 20 percent of exports from Cambodia to the U.S. each year are mostly garments and other textiles. The European Union, which like the U.S. has also threatened to revoke privileged trade access to Cambodia over human rights concerns, receives about a further 40 percent of the mostly textile exports.

Beyond trade, the Chinese Embassy in also said in its post to Facebook — a social network to which its government blocks access — that it had an upper hand in supporting economic development in Cambodia over recent years.

“It is worth noting that China has built 31 highways and 8 bridges for Cambodia with the total length of highway up to more than 3000 km,” the post said. “What has the US done in this area? China helped to build all the hydropower stations in Cambodia (with 80% of Cambodia’s installed electricity production capacity).”

Apparently only further impassioned, the embassy of the U.S., which propped up the Lon Nol regime after the March 1970 coup against Prince Norodom Sihanouk but recently denied organizing the ouster of Cambodia’s father of independence, questioned the quality of China’s development in second Facebook post.

“Are you seeing #thefullpictureKH?” the embassy asked.

Cambodia has over the past five years grown increasingly reliant on Chinese aid, loans and investments as the Hun Sen has tried to shore up his almost 35-year grip on power. About 41 percent of Cambodia’s debt is now owed to China and critics have said the debts have put the government in a precarious position.

Information Minister Khieu Kanharith had on April 20 already weighed into the escalating Facebook flame war — breaking from his regular posting of inspirational quotations and funny images to criticize the social media campaign by the U.S.

“It is perhaps only Cambodia where an embassy releases fake news that attacks both its host country and also another country in the world with which it also has diplomatic relations,” Kanharith wrote alongside images of the first U.S. post.

“The ‘analysts’ here are trying to show that it is business with the U.S. that has created jobs in Cambodia but they ‘forgot’ to show one factor also economically important: the size of the investments in Cambodia,” he added. “How much is that? We only want to build good relationships with every country, and in particular the U.S., but some people are trying to burn this relationship out of ignorance.”

However, Sophal Ear, an associate professor of diplomacy at Occidental College in Los Angeles and the author of the 2012 book “Aid Dependence in Cambodia: How Foreign Assistance Undermines Democracy,” said he believed the U.S. Embassy was only pointing out economic facts by highlighting the trade gap with China.

He said Cambodia must consider whether it benefits more from imports or exports.

“Boasting about trade volume and being #1 means very little if most of the trade is exports from China into Cambodia, meaning Cambodia is importing a bunch of stuff from China,” Ear said. “How does that make money for Cambodia? Cambodia has to make things to sell the world. Buying things does not make you money.”

He acknowledged many of China’s imports into Cambodia were to produce Cambodia’s exports to the U.S. and Europe, but questioned the line of argument. The E.U. and the U.S., he said, “pay Cambodia foreign exchange” for the exports — and if that stopped “there is no need to import anything from China.”

“You have to look at it as flip sides of the same coin, except that the more Cambodia exports, the better for Cambodia,” he said. “No country has ever developed as an import-oriented economy. It’s export-oriented development.”

Cambodian People’s Party spokesman Sok Eysan said in a message on Telegram that he did not think it was too unusual for Cambodia to be overly reliant on imports of raw materials from China. He noted that Cambodia has a population of 15-16 million people and China 1.5 billion, and said it would be hard to balance trade.

He also said the government was grateful for China’s development investments and praised Beijing “as a great country and a great friend of Cambodia.”

“China has helped Cambodia to develop all of its sectors such as infrastructure, roads, bridges, hotels, buildings, schools, hospitals and several hydroelectric facilities,” Eysan wrote. “There is investment in all sectors — in particular the garment sector, which has brought jobs to millions of Cambodian young people and improved the livelihoods for millions of families throughout the country.”

Beijing ended its funding and support for the Khmer Rouge and finally switched support to the Phnom Penh government only after the October 1991 Paris Peace Agreement, which ended a more than two-decades civil war that intensified from an uneasy domestic balance with the March 1970 ouster of Prince Sihanouk.

The U.S. had also backed the coalition of rebels in their 1980s fight against Hun Sen’s Hanoi-backed post-Khmer Rouge regime — but over the years increasingly couched support as being for “non-communist” partners led by Prince Sihanouk.

Both governments have tended to downplay their roles in sending a peaceful Cambodia into years of war and focussed instead on recent contributions.

The trade disparity has allowed the U.S. and E.U. to exercise considerable pressure on Hun Sen to act on concerns about human rights in Cambodia in the wake of recent repression of the country’s opposition, civil society and media.

Yet China and Cambodia have both pledged to try to shorten the trade gap.

After a visit to China in January, Hun Sen also said he and Chinese President Xi Jinping agreed to boost total bilateral trade volume to $10 billion by 2023. Hun Sen will attend a meeting on China’s “One Belt, One Road” initiative in Beijing from April 25 to 29, with the prime minister expected to deliver remarks on April 26. 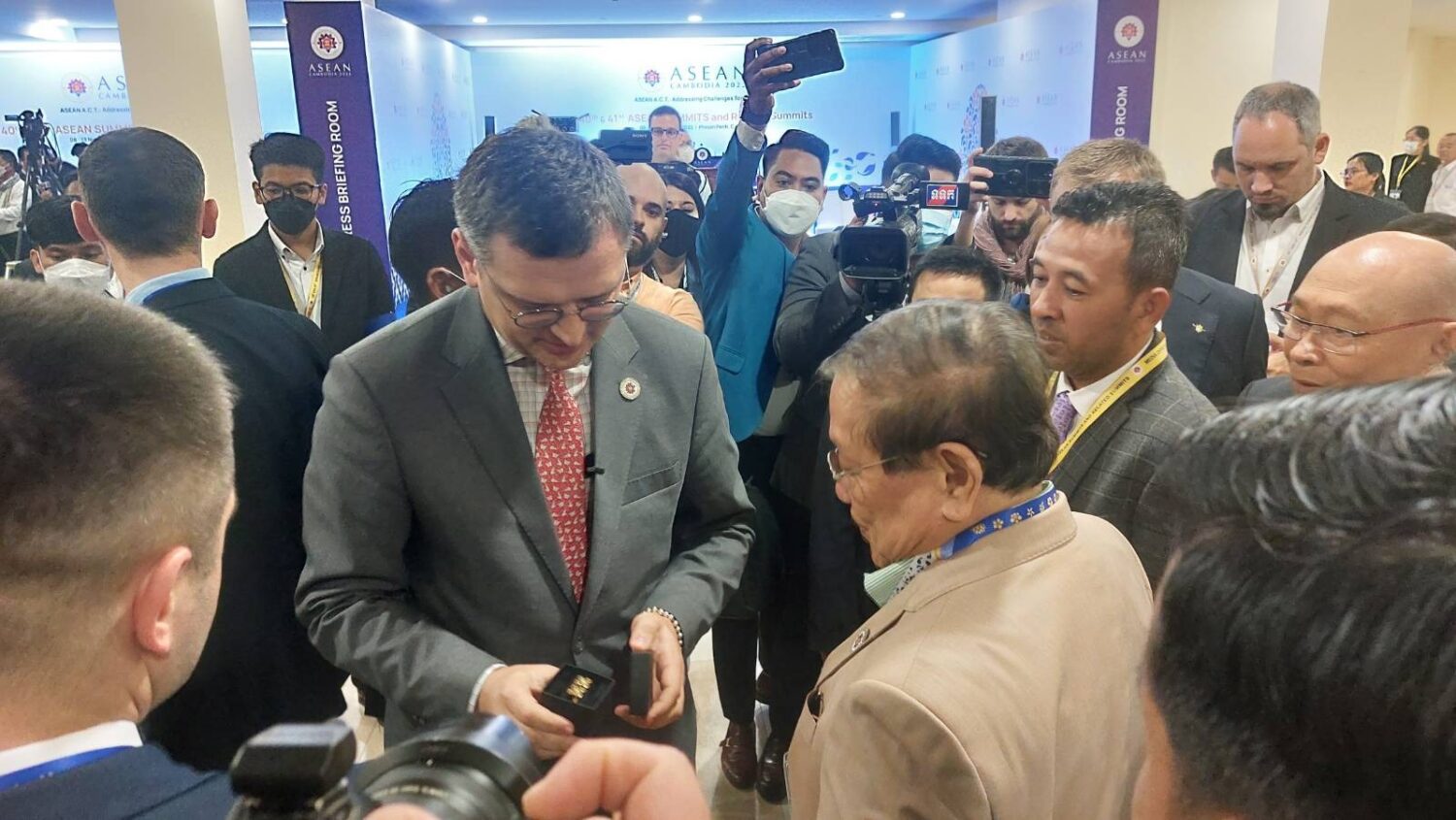 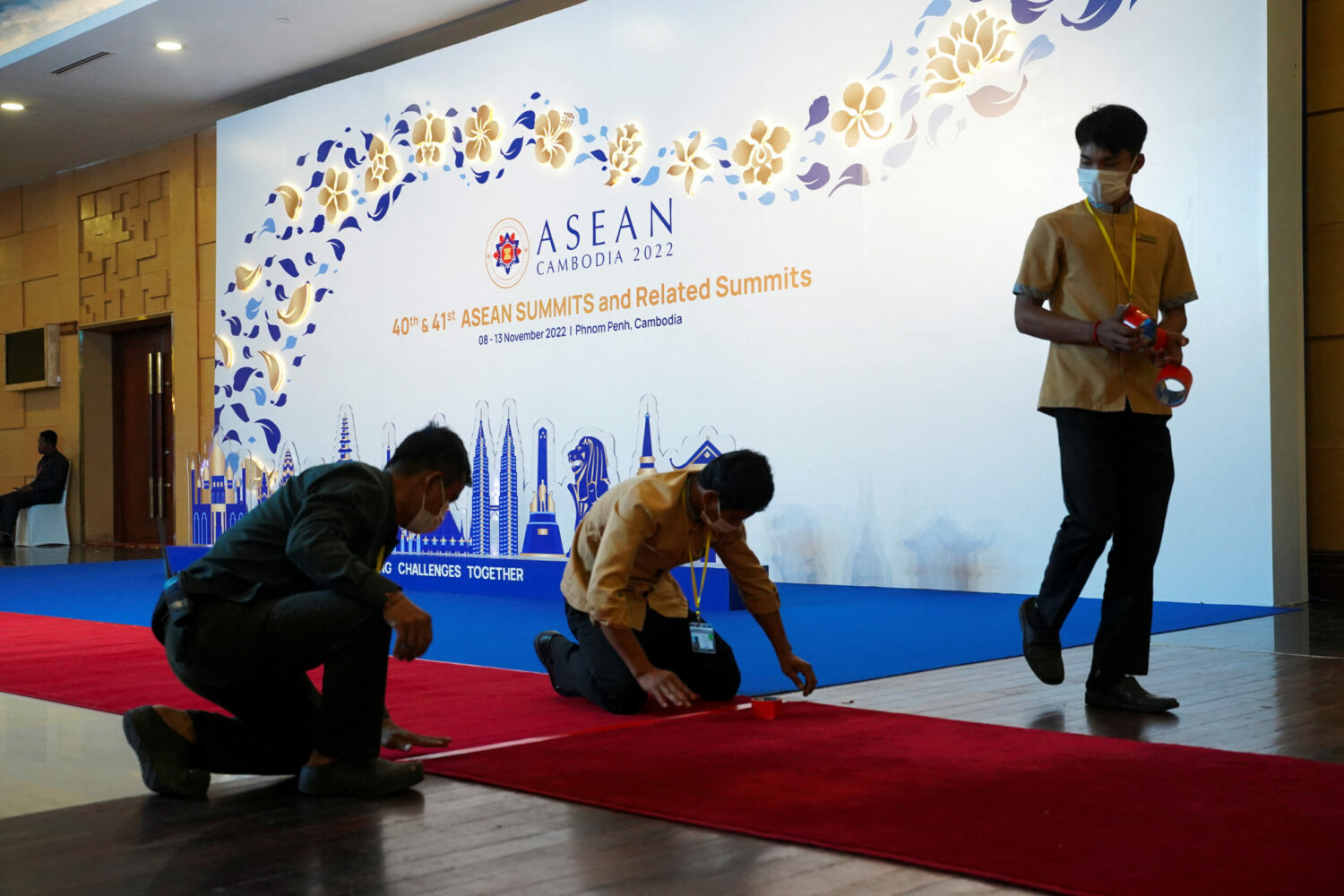