US Claims of a China-Cambodia Base Deal Cast as ‘Propaganda’ 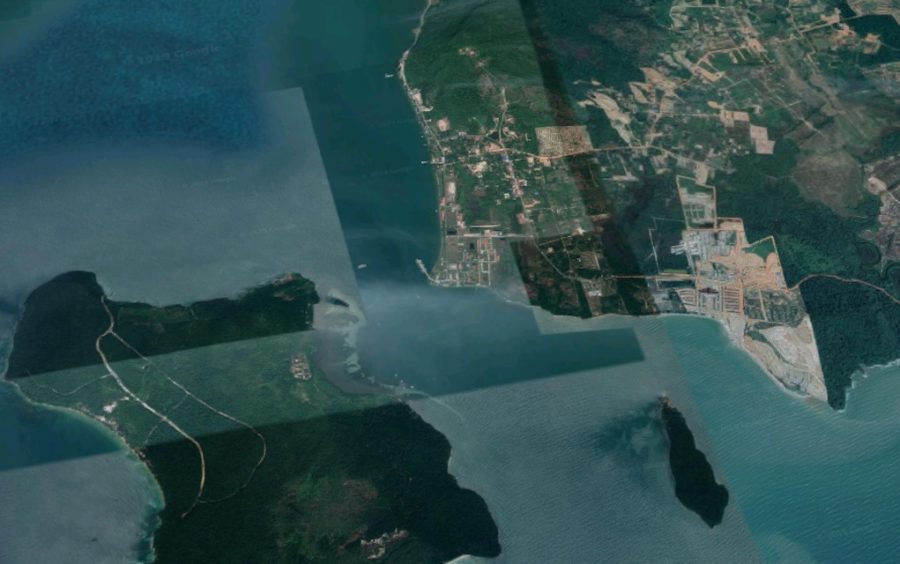 Ream Naval Base and its surroundings (Google)

Prime Minister Hun Sen on Monday denied reported U.S. claims that Cambodia had signed an agreement with China to give the Chinese military exclusive access to a Cambodian naval base on the coast of Preah Sihanouk province.

Speaking anonymously to the Wall Street Journal, U.S. officials claimed that Cambodia and China had secretly signed a pact this spring giving China exclusive rights to a Cambodian naval installation in Ream, near Sihanoukville, and “not far from a large airport now being constructed by a Chinese company.”

The unnamed U.S. and “allied” officials were reported as saying that a draft of the agreement “would allow China to use the base for 30 years, with automatic renewals every 10 years after that.”

“China would be able to post military personnel, store weapons and berth warships, according to the draft,” the Journal reported, though its journalists did not say they had seen the agreement themselves.

The U.S. officials’ claims are the latest in a series of accusations — mostly delivered anonymously via media outlets — that the Cambodian government is moving to allow a Chinese military presence on its soil.

Hun Sen said in a statement that he “categorically rejects the Fake News” and considers the report “as the most ill intention[ed] against Cambodia.”

The prime minister told government-aligned outlet Fresh News — which itself has, in turn, frequently pushed anonymous missives against the U.S. — that the government had never discussed nor signed an agreement with China that would allow a Chinese military presence on Cambodian soil.

“It is time to stop using fake news about the Chinese military presence on Cambodian territory against us,” he said.

Meanwhile, the U.S. Embassy in Phnom Penh said it was “monitoring media reports that there is a secret agreement” — claims that reportedly originated from U.S. officials. It called on Cambodia to be “fully transparent about any military arrangements with China.”

The U.S. was concerned that any steps by Cambodia to “invite a foreign military presence in Cambodia would threaten the coherence and centrality of the Association of Southeast Asian Nations (ASEAN) in coordinating regional developments, and disturb peace and stability in Southeast Asia,” embassy spokeswoman Emily Zeeberg said in an email.

Zeeberg said the U.S. would “not resume full military cooperation with Cambodia” until the government made “substantial progress on increasing the political space and restoring full democracy,” including by dropping charges against opposition leader Kem Sokha and “allowing civil society and media to operate independently,” Zeeberg said.

Sophal Ear, associate professor of diplomacy and world affairs at Occidental College in Los Angeles, told VOD that the report did not clearly show evidence to clarify a Chinese military presence in Cambodia.

“If the US saw a draft of the agreement, where is the copy?” Sophal wrote in a message, while adding that it was not unusual for governments to keep security agreements secret.

He posited that perhaps the alleged Cambodia-China deal was signed without a Khmer-language copy so that it could be disavowed.

“Is it possible that the copy signed with China has only a Chinese language copy and no Khmer version? Or maybe only an English version for everyone so both countries can deny its existence?” Ear said.

The U.S. Worldwide Threat Assessment released in January 2019 says “Cambodia’s slide toward autocracy, which culminated in the Cambodian People’s Party’s retention of power and complete dominance of the national legislature, opens the way for a constitutional amendment that could lead to a Chinese military presence in the country.”

Cambodia’s Defense Ministry has rejected the assessment and said it was an interference in Cambodia’s internal affairs.

A U.S. sanctions bill currently before the Senate seeks funds for Khmer-language anti-Chinese propaganda that would be disseminated online.