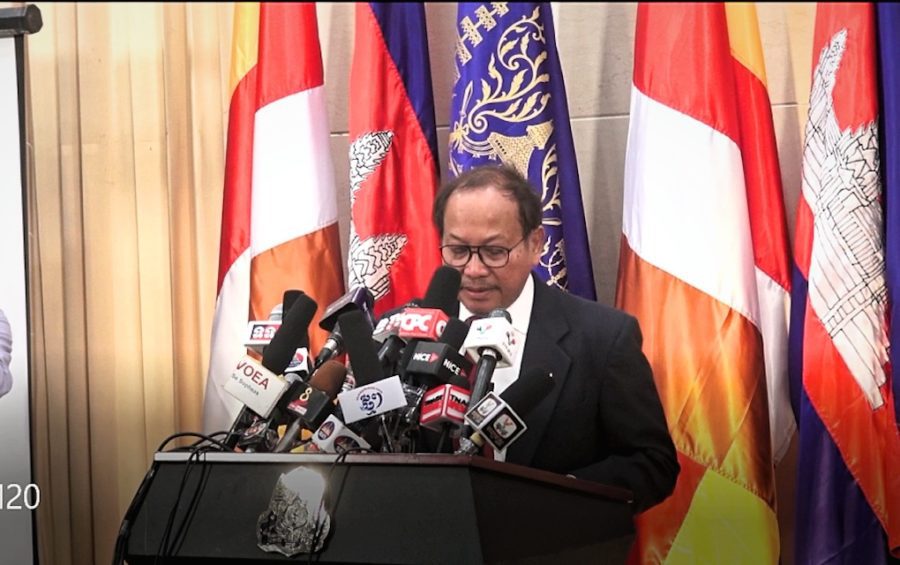 Phay Siphan speaks at a press conference on August 1.

U.S. Embassy officials should pack up and leave if they don’t like how last year’s national election was run, government spokesman Phay Siphan said on Thursday.

Siphan, a U.S. dual citizen, responded to an embassy statement — posted to Facebook this week for the election’s one-year anniversary — that repeated the U.S.’s criticism of the election as “deeply flawed” since it excluded the country’s main opposition.

The ruling Cambodian People’s Party won all 125 out of 125 seats in the National Assembly following the dissolution of the opposition Cambodia National Rescue Party eight months before the election. Party leader Kem Sokha was jailed for alleged treason and remains under house arrest.

On Wednesday, the Foreign Affairs Ministry remonstrated against the embassy’s characterization of the widely panned election as flawed, saying it was an aggressive attack on Cambodia and violated the Vienna Convention on Diplomatic Relations.

Speaking at a press conference the following day, Siphan said “wild people” without discipline were running the embassy in the absence of an ambassador. The U.S. Embassy in Phnom Penh has been without ambassador for months due to nominee W. Patrick Murphy failing to gain the approval of the U.S. Senate.

On Thursday U.S. time, Murphy was confirmed as the new U.S. ambassador to Cambodia by voice vote.

“It still has no ambassador,” Siphan said. “So we find it hard to work with the trivial officials there. We look down on them because they are wild people trying to incite people.”

Rather than deal with the Phnom Penh-based envoys, the Cambodian government will go straight to Washington with any issues, he said.

“We have another way. We have our ambassadors in Washington. They are going to protest,” Siphan said.

The Cambodian government has signed contracts worth $1.2 million with American lobbyists this year. The government is opposing moves in the U.S. Congress to pass sanctions against Cambodian officials for alleged complicity in the country’s democratic backsliding.

“We do not let anyone abuse us,” Siphan added. “This is the message, and the officials at the embassy who used the brutal words should stop. We are still friends but if those officers don’t like to work in Cambodia, please pack up and go back.”

Political analyst Em Sovannara said Siphan was being over the top and “wild” himself.

“Wild people will only work with wild people,” Sovannara said. “When we escalate this issue, it adds to the heat. Cambodia should be more careful.”

U.S.-Cambodia relations have been strained in recent years due to the country’s alleged decline in democracy and human rights as well as its increasing turn toward democracy-indifferent China. Cambodia has embarked on military drills with China and is accused by the U.S. of preparing to allow Chinese troops to be stationed on Cambodian military bases along the Gulf of Thailand.

On Wednesday, the day after posting its three-paragraph election criticism, the U.S. Embassy sounded a lighter note on its Facebook page: “For the month of August, Embassy Phnom Penh will celebrate tourism, and the many ways the United States and Cambodia collaborate!”

Updated at 3:52 p.m. with Senate confirmation of new U.S. ambassador to Cambodia.