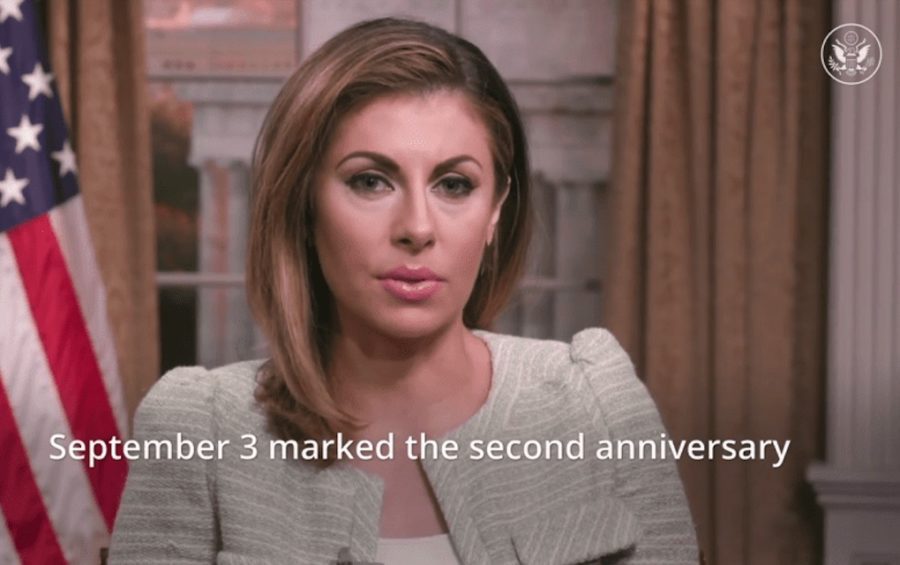 US State Department spokeswoman Morgan Ortagus in a video posted to the Facebook page of the US embassy in Phnom Penh on September 10, 2019

U.S. State Department spokeswoman Morgan Ortagus called the continued detention without trial of former opposition leader Kem Sokha “baseless” in a video published on Facebook by the embassy in Phnom Penh on Tuesday.

The one-minute video, with subtitles in both English and Khmer, reaffirmed the U.S.’s support for the release of the former president of the main opposition Cambodia National Rescue Party (CNRP).

Sokha was arrested on September 3, 2017 over accusations of colluding with the U.S. to topple the government — allegations which he denies. The CNRP was dissolved in November that year, eight months ahead of a national election.

Ortagus said the Cambodian government had failed to produce any credible evidence to back up its claims against Sokha.

“The United States again calls upon the Cambodian government to drop all charges against Kem Sokha, restore his civil political rights and free all those who are arbitrarily detained,” Ortagus said.

The U.S. has repeatedly called for the case against Sokha to be dropped, while criticizing last year’s election as neither free nor fair for being held without a credible political opposition. The ruling Cambodian People’s Party won all 125 seats in the National Assembly.

“We urge the Cambodian government to take concrete steps to promote reconciliation by allowing media and civil society to operate without fear and intimidation or reprisal for exercising their rights to freedom of expression and association under the law,” Ortagus added.

According to a speech on Monday by the United Nations’ high commissioner for human rights, Michelle Bachelet, at least 22 members or supporters of the outlawed opposition are currently in detention in Cambodia.

Government spokesman Phay Siphan on Tuesday also repeated Cambodia’s line that the U.S.’s criticism failed to reflect realities in the country, and that its actions taken against Sokha were based on facts and the law.

“I thank the United States for raising this, but it is regretful that the United States’ claims miss the right target. It is just a political message because the dissolution of the party and the arrest was based on fact,” Siphan said. “It should look into the facts of why there was the arrest.”

Sokha is currently under de facto house arrest after being jailed for a year. His case for “conspiring with a foreign power” appears to stem from a video of a 2013 speech he gave in Melbourne.

According to the government’s transcript of the speech, Sokha says in the video that he has been supported by the U.S. since he entered politics in 1993 and was recently advised to pursue grassroots support in the model of the 2000 overthrow of Yugoslavian dictator Slobodan Milosevic.

Political analyst Em Sovannara said the content of the video was not new, but the U.S. repeating its position was a message to the Cambodian government that it was still considering action.

“This message is not a coincidence. It is a commitment and mobilization to alert the ruling party to think about the possible risks if it does not respond to opening up a space for freedom or releasing opposition party activists,” Sovannara said.

Proposed legislation tabled in the U.S. House and Senate would sanction Cambodian officials and rescind a free trade agreement over Washington’s political and human rights concerns.

The E.U. has also embarked on a process to suspend duty-free trade with Cambodia over what it says is a deterioration in the country’s political space.