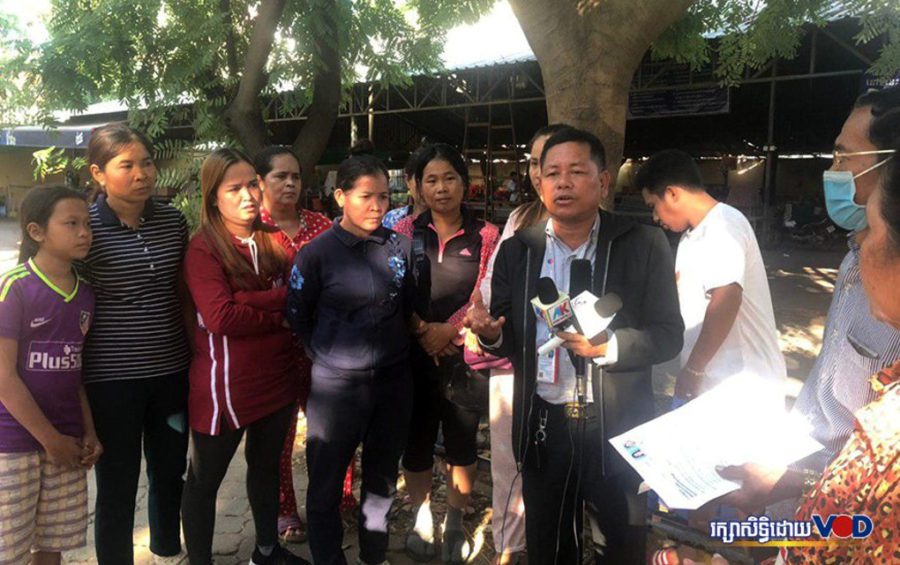 Vendors selling food and drinks at a Phnom Penh high school campus are speaking out after the principal expelled them from the grounds, saying the school needed the space to build a new library.

Half of the vendors using 16 stalls at Bun Rany Hun Sen Phsar Doeum Thkov High School in the capital’s Chamkar Mon district are relatives of teachers there, one of the other eight vendors said, raising concerns of unequal treatment.

Vendor Srey Sros said she was worried that those with family connections — who have agreed to move — will be invited back to the campus and allowed to sling their snacks, while the others will not.

“In the future, they may have the right to return back and sell, but for us who are not employees [or employees’ relatives], if we move out, we will be out for good,” Sros told VOD on Wednesday.

Sros, who has been selling at the school since 1990, said the protesting vendors were concerned that the principal, Khat Pet, was kicking them out in order to hand the space over to others.

They demanded Pet find a solution by providing them a new location to sell.

However, Pet told VOD that the school needs the area to build a library and had no other space for any vendors going forward.

“When we stopped them, we will not have a place for them to sell again because we have a contract and we don’t promise them because in the contract, we said that whenever we need the space, we will take it back,” Pet said. “We have a proper note.”

He said all vendors on campus were under a one-year contract.

Sros claimed that the vendors never had an official contract with the school, just an agreement that they were only allowed to sell healthy food and beverages.

The vendors each paid 1 million riel, or about $250, every month to the school to rent their stall space, she added.

Sorn Sotheavy, a vendor at the school since 1984 and a former teacher there, said he had never had a problem at the school until recently.

The protesting vendors didn’t object to the construction of a library or science labs, but wanted Pet to treat all 16 vendors equally and provide a new space for them to sell, Sotheavy said.

“All teachers, the wives of teachers, and those who are not relatives of the teachers should be offered an equal place to sell,” he said. “Do not discriminate that this is a teacher’s wife, this is a teacher, and this group are not teachers and don’t need to sell. That’s not right.”