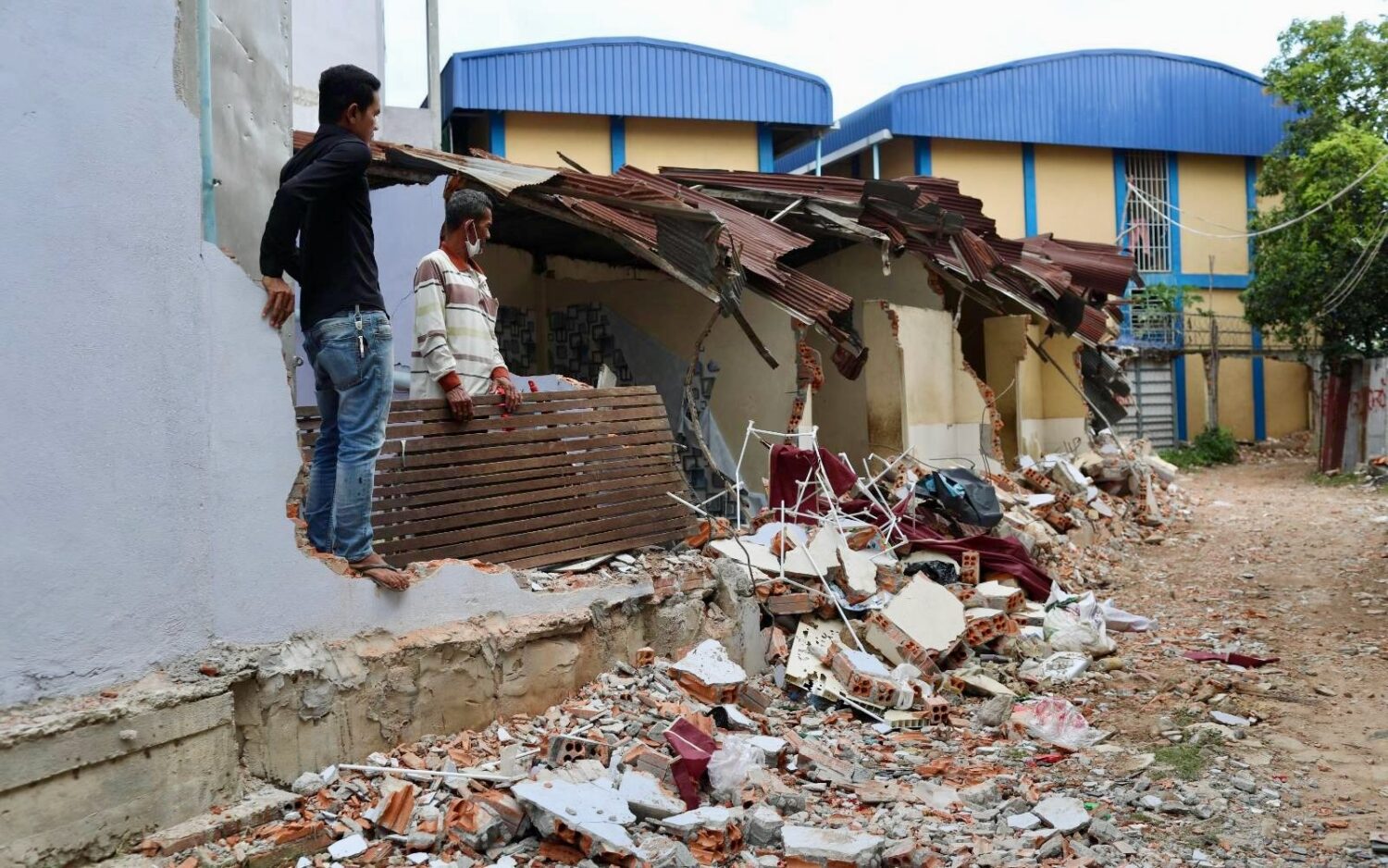 Chum Vanna and his son collect belongings from the debris of their demolished house on August 23, 2022. (Roun Ry/VOD)

A group of 39 families in Phnom Penh’s Dangkao on Sunday hired an excavator to destroy part of their neighbor’s house in an ongoing dispute over a new road.

The families behind the demolition in the Khva village of Dangkao district in the south of the capital say their neighbor, Chum Vanna, had built an addition to his home on land intended for a public road. Vanna rejects that he did anything wrong, saying he’d built the addition, a four-room strip he rented out, on land that he’d owned since 2000.

“They destroyed my house, which has hurt me,” he said. “I own the house legally and what they did is way more cruel than the Pol Pot regime.”

The muddled local dispute has gone on for more than five years but mostly concerns an as-yet unbuilt public access road announced in 2018 that would push to the back of the small village, allowing residents an easier means to get onto the larger Chamkar Doung road.

The size of the proposed access road is at the core of the dispute. Villagers, including the chief, have negotiated with local officials to find an option that would make the smallest impact on their homes. Residents told VOD that, originally, the road was supposed to be six meters wide. This was reduced to four meters after locals spoke to officials.

However, Vanna said that he’s now the one losing property somewhere in this process of redesign. He lives at what would be the start of the access road, on its future corner with Chamkar Doung.

The homeowner said he filed a complaint with the district on Thursday, and was told officials would try to solve the problem.

Vanna claimed authorities had made an error in measuring out space for the future roadway, adding that his neighbors had agreed at a meeting in February to leave his four rental rooms alone. Others in the village deny that, insisting that Vanna had built his extension only in the past few years, and on land intended for the road.

Huong Savin is a resident of Khva and a representative of the 39 families who demolished Vanna’s rental rooms. She said she was born in the village and had spent her life there.

Savin said that before she and the other families moved on their own to tear down Vanna’s rental rooms, they made a complaint to the commune chief. According to Savin, the chief summoned Vanna to a meeting at the commune hall, but Vanna refused to meet.

“We decided to hire an excavator to demolish the house because many years had passed without any solution,” she said. “The law told him to move four meters, but he still did not. It is injustice, so we got angry, we could not be any more patient so we demolished it. We are not wrong.”

Savin said residents have had a hard time getting in and out of the neighborhood, especially during emergencies.

“Last one or two years ago, my relatives in-law had their house catch on fire. If it was not for the help from my people here, everything would have been burned with nothing left, as the firefighting truck could not get in,” she said.

Village chief Bich Bun said the problem is unresolved because Vanna’s building is still too wide for the proposed four-meter-wide road. Bun said they have been fighting over years about it so the 39 families got angry and took an excavator to break the rental room of Chum Vanna.