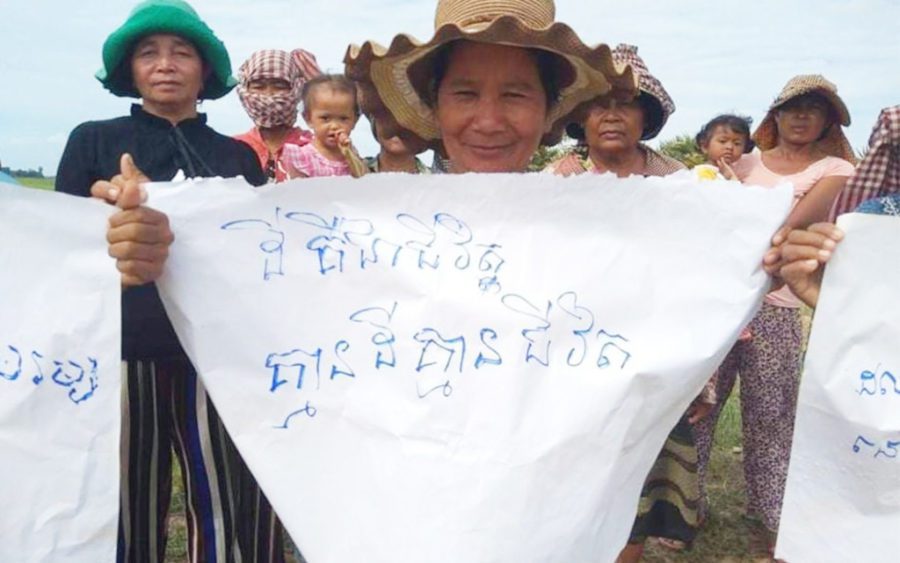 Svay Rieng residents protest over compensation for their land on August 2, 2021. (Supplied)

Village officials pressured some Svay Rieng residents to accept less than $0.25 per square meter to give up their land for a state reservoir, two community representatives allege, though a village chief denies there was any coercion.

Last week, two representatives in the dispute, which traces back to 2008, were fined about $1,000 each for Covid-19 violations over Facebook posts showing villagers in a field holding banners.

Yous Sophorn, who was fined, said about 30 villagers pictured in the posts had been placed in quarantine at their homes, and alleged that during that time local officials had visited other residents and pressured them to sign the compensation deal.

“A village chief and his assistant said that if people do not go thumb-print, they would no longer respond to them. If they want to reach them for legal documents, he would stop doing it for them because they did not cooperate,” Sophorn said.

En Soth, who was also fined, alleged that authorities were pushing people in three villages to accept the 900 riel per square meter compensation.

“They do not seek justice for us as the land dispute victims, but turn to harm us instead,” Soth said.

Chek village chief In Sokhon rejected the claims. People had volunteered to accept the compensation, he said.

One of last week’s Facebook posts expressed disbelief at the compensation on offer. “On August 2, authorities came to ask people to give thumbprints to take 900 riel per square meter, but they didn’t accept. Where’s the place that has such a land price?” a caption for protesters said.

In 2008, the Water Resources Ministry and local authorities marked the area for a reservoir, but residents say they have farmed the land since the end of the Khmer Rouge era in 1979 and are demanding enough compensation so they can buy new land for farming.