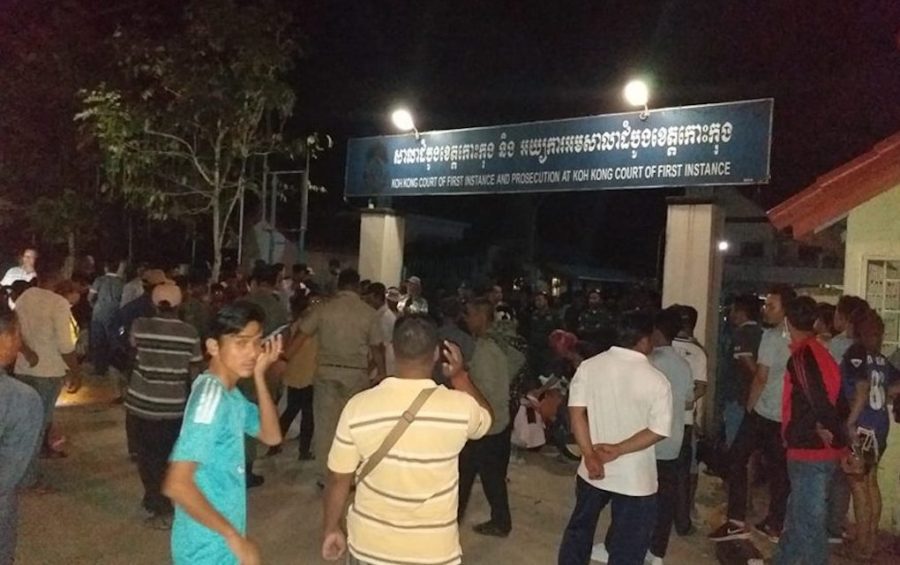 Local residents protest outside the Koh Kong Provincial Court demanding the release of a village guard on November 25, 2019. (Supplied)

Residents of a village in Koh Kong province rallied for the release of their village guard who made a death threat against a provincial deputy governor amid a land dispute.

Tith Sitha, 40, was arrested on Monday and charged in the evening with making a death threat against deputy governor Sok Sothy in April, a crime that carries a jail term of up to two years.

According to the provincial court, residents of Samrong Takeo village in Kiri Sakor district’s Prek Khsach commune tried to build a dirt road to their village on April 7 that would have cut through the disputed economic land concession of the Union Development Group (UDG), a Chinese firm building a resort on the Koh Kong coast.

The development has experienced years of land disputes, with the firm at one point accused of hiring soldiers to harass residents.

Various local authorities, from the commune to provincial level, intervened to halt the villagers’ construction of the 200-meter road in April, the court supervision order from August 30 says.

The day after the road incident, on April 8, Sitha sent a voice recording to Sothy on Facebook.

“I can let you die any day … Be ready to die if you make a mistake of a single word. OK, brother? I said I’ll wait for you, always welcome you,” Sitha said, according to a court transcript of the recording.

The August court order says Sitha acknowledged that he was the voice in the recording but denied he had violent intentions.

Sothy, the deputy governor, told VOD that he had pursued the complaint against Sitha after the village guard refused to publicly apologize. He had been willing to drop the case if the guard apologized for making the death threat, he said.

Licadho monitor Pen Vuthea said Sitha had sent the message because he was angry and drunk.

“This matter happened because he got mad for one second and talked in a way that affected a provincial leader,” Vuthea said. “So, from the point of view of the provincial leader, we see that he is a resident saying something that affects us. But let us also consider the nature of his words, whether he really had intent.”

Vuthea asked the deputy governor and provincial court to reconsider the charge against Sitha.

Samrong Takeo villager Sem Thy said on Tuesday that more than 100 residents were gathered for a second day in front of the provincial court to demand Sitha’s release.

“We will not go back home until there is a release,” Thy said.

“This arrest is not reasonable, and our people in the whole commune would like to apologize on behalf of him and beg for his release. It was just a verbal argument,” he added.

Another villager, Ros Sophal, said locals supported Sitha because he has been active in trying to protect and help people in the community during land disputes.

He took the people’s side and criticized provincial leaders over the road as well as previous land-grabbing disputes with UDG, Sophal said.

“I see he is in the wrong, but it was just a small mistake in a verbal argument,” Sophal said. “Our provincial leaders have made many more mistakes. They promised people that they would find a solution for our land disputes and issue land titles for people, but they have not kept their word. That made Tith Sitha angry and led to him using inappropriate words.”

Village guards are common in rural areas and typically employed by commune authorities on an ad-hoc basis to keep watch over weddings and other minor security matters.

The government granted UDG a 36,000-hectare concession in the districts of Botum Sakor and Kiri Sakor 11 years ago. It received a further 9,100 hectares in 2011.

According to a 2012 report from the Community Legal Education Center, the land concession overlapped with 12 existing villages inhabited by more than 1,000 families.