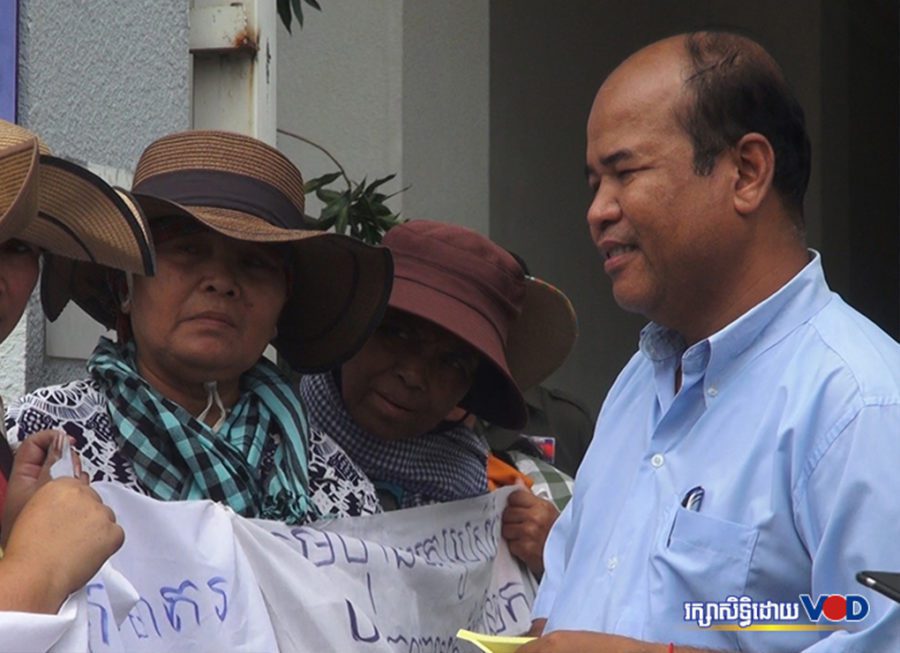 Villagers affected by alleged land-grabbing for the construction of a massive Chinese resort development in Koh Kong province have appealed to the Land Management Ministry to expedite its work to find a solution.

About a dozen representatives for families involved in the dispute with the Union Development Group (UDG), which is building a huge  $3.8-billion coastal resort, gathered outside the Land Ministry on Tuesday and Wednesday to seek help from minister Chea Sophara, after protesting at the Environment Ministry on Monday.

They said had yet to receive compensation for their losses of land in Botum Sakor and Kiri Sakor districts after more than 10 years of battling with UDG.

Saing Puy, who said she represented a group of affected villagers from Kiri Sakor’s Koh Sdech commune, told VOD the case had recently been transferred from the Environment Ministry to the Land Management Ministry.

He claimed the ministry had previously acknowledged their right to the land.

In 2008, the government granted 36,000 hectares as an economic land concession to UDG, and a further 9,100 hectares in 2011. The land was to be used for commercial development and tourist resorts, but overlapped with 12 villages inhabited by more than 1,000 families, according to a 2012 U.N. report.

Chhay Kimduch, another representative, said the years of delays had put families in debt as they struggled to earn a livelihood without land to farm on. There were 77 families from five communes in the districts of Botum Sakor and Kiri Sakor who had yet to be compensated for their loss of land in 2009, he explained.

UDG routinely sabotaged any of their efforts to grow food to eat, Kimduch said.

“The crops that were destroyed were cashew nuts, mangoes and jackfruit. For more than 10 years, they have not allowed us to do any farming. If anyone dares to enter, they will be arrested and sent to jail,” he said, decrying the treatment of the villagers by authorities. “One person planted a pole, and they were arrested and remain in jail. For more than 10 years, people can’t do anything.”

He said the families had documents from local authorities backing their claims to the land. “[They] gave to the Chinese. Why can’t [they] give to our own people?”

Hour In, a monitor for human rights group Licadho in Koh Kong, said he continued to push the government to speed up its work to find a solution. Land Management Ministry spokesman Seng Lot could not be reached.

Correction (May 28, 2019): A previous version of this story stated that only 200 families were affected by the UDG development.﻿