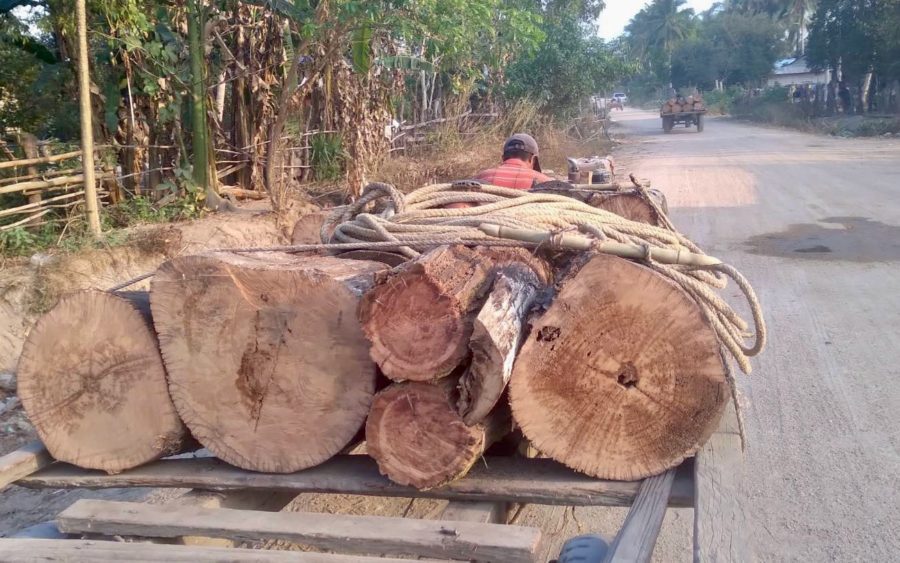 ORAL DISTRICT, Kampong Speu — A long dirt road in Trapaing Chor commune sees trailers traveling to the foothills of the Oral mountains and coming back with firewood and other pieces of timber. In front of each house is a small collection of wood, mostly to be used for fence posts.

At a wooden bridge in the area, a woman says she asks for a toll from trailers carrying wood out of the Phnom Oral Wildlife Sanctuary every day. She suggested that reporters wait and count how many vehicles come through. VOD reporters saw at least six trailers pass by in the next hour.

Last month, several residents in Trapaing Chor spoke to reporters that illegal logging is rampant to support livelihoods in the village, and that getting permission to cut the protected trees was a matter of paying a small, regular bribe.

Mol Rim, 43, said her family had recently bought a trailer for family members to go logging in the Oral mountains and haul timber out.

Residents needed the work to pay their debts, she said. “Most of the villagers here owe money to the bank,” Rim said.

The family pays local environmental officers 150,000 riel a month, about $37.5, to be allowed to cut the wood, Rim said.

Her family pays environmental officers around $5 per day, she said.

“I’m scared when I cut, but if we do not … what do we have?” Nou said. If the environmental officers shut them down, they would not be able to earn a living, she said. “If they [allow it], we can find a little to feed.”

Another resident said all her family members logged timber from the wildlife sanctuary. Her family also paid environmental officers about 150,000 riel a month, she said.

If they don’t pay the bribe, environmental officers would seize their tools or even burn their vehicles, the woman said.

There is no longer any luxury rosewood in the area, but cheaper trees are still logged by people from her village and surrounding areas, she said.

The Environment Ministry’s Kampong Speu provincial director, Oum Mak Theary, said he would take action against any of his officers if they took bribes, including sending them to prison. But he needed evidence, and threatened to sue for defamation for any unfounded allegations.

“Give me the documents,” Mak Theary said. “I’m warning you.”

Rim said she also didn’t know how to respond to the threat, but was happy to go on the record about the payments.

The illegal logging itself is well-known in the area. Trapaing Chor commune chief Tep Nem said he was aware of families logging wood, though he did not have direct information about bribes. “But if the people say so, if they say so, it is true — if they go up to cut the trees and bring them back. If they were not allowed to do so, it would harm our people.”

San Mala, an advocacy officer at the Cambodian Youth Network, said the Environment Ministry should investigate the alleged bribery, adding that residents should be given skills training to find work other than illegal logging.