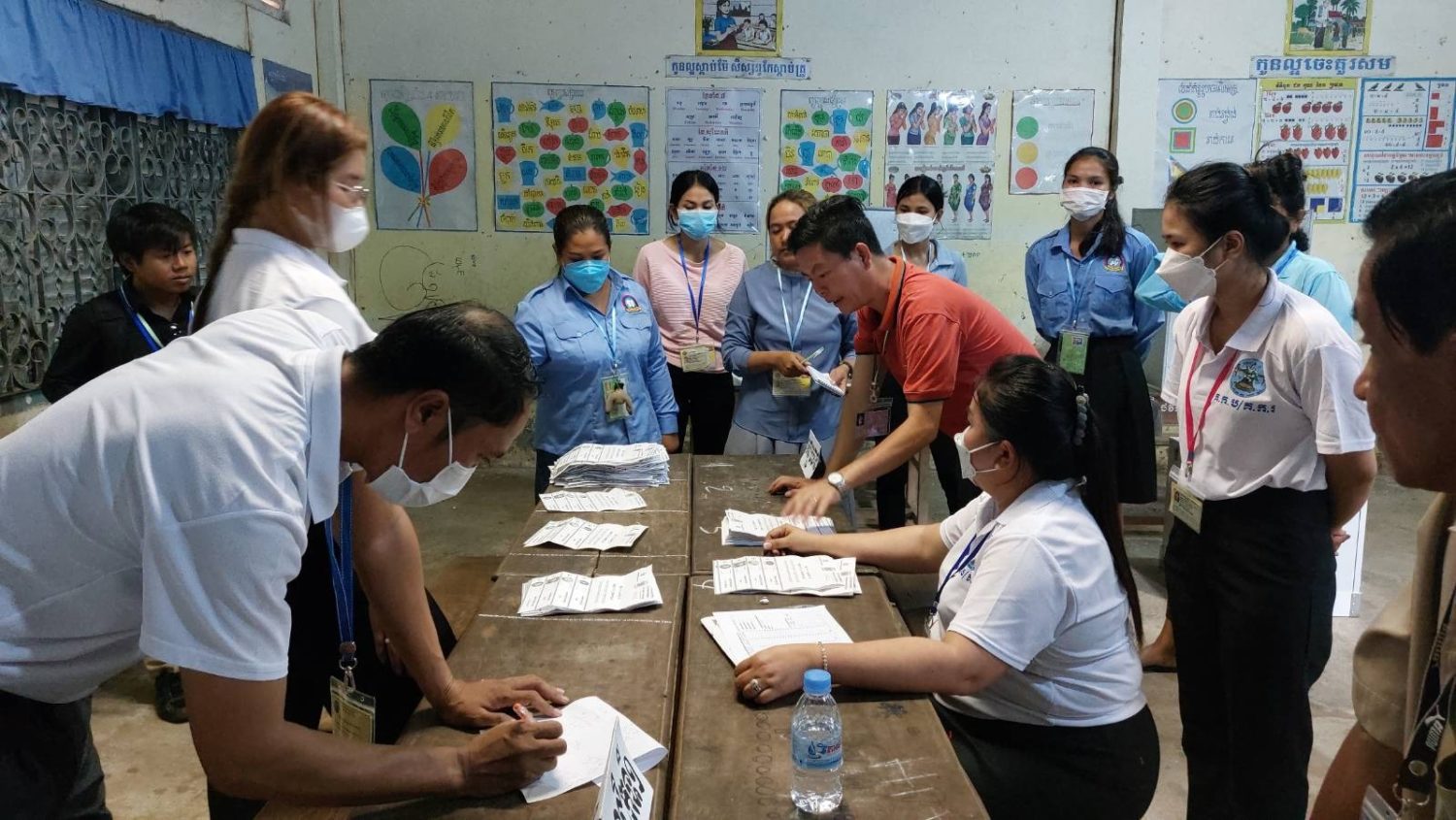 For some, the Candlelight Party’s single-digit wins in communes is simply “unbelievable.” Others point to voter intimidation and the dearth of neutral observers as burying the voters’ “real” will.

But in the end, the results of Sunday’s election are showing similarities to 2018 — Cambodia’s most recent prior election, when the lack of a strong opposition led to a surge in the ruling party’s vote share.

Commune-by-commune preliminary voting results continued to be released on Monday by the NEC, though by 3:30 p.m. at least 74 communes had seen their results changed from the day before; in most of those cases, the vote count for every party was doubled — a possible technical error. Some numbers fluctuated during the day. The total votes summed across all communes was higher than the NEC’s stated voter turnout figure from Sunday. The figures are not final.

Nevertheless, the results remained largely consistent: around a 75% vote share for the CPP, 22% for Candlelight and 3% for other parties.

That resembles the widely criticized 2018 election, but with the non-CPP votes mostly funneled to the Candlelight Party instead of a range of smaller parties.

Sam Kuntheamy, who heads election monitoring group Nicfec, said the results were hard to believe at face value. If the Candlelight Party had really won just 3-4 communes out of 1,652, there must have been unfairness in the election, he said.

“I don’t think that is a fair result, it shouldn’t be this result, it’s unbelievable,” Kuntheamy said.

Every commune declares a winner based on a first-past-the-post system: Whichever party has the most votes receives the commune chief position. This skews the number of winners from minor parties toward larger ones: In theory, a party could win 49% in every commune and still end up with 0% commune chiefs if a rival consistently gets 51%. (The rest of the commune council is distributed proportionally by vote shares.)

Candlelight and others have alleged intimidation in the leadup to the election, especially against candidates and party electoral monitors; local officials being stationed at polling sites on election day and writing down who showed up; and vote counts taking place in closed rooms. These can add up to a significant suppression of opposition votes, the party said in a press conference on Monday, advocating for a reform of the National Election Committee but accepting the election’s results.

For Ou Chanrath, a former CNRP lawmaker who founded the Cambodia Reform Party, opposition sentiments had already been subdued; supporters were not inspired.

“Voters were not really excited with the election. They seemed to come unhappily,” Chanrath said. “Like me: I also went to vote but it was not voting from my real will, but voting out of consideration of what’s the next-best option.”

The CNRP — formed in a merger between prominent politicians Sam Rainsy and Kem Sokha — galvanized opposition sentiment for the 2013 national election and 2017 commune election before being struck down by the Supreme Court later in 2017. Rainsy now lives in France; Sokha is under court supervision over a treason case and is banned from politics.

Political commentator Ly Sreysros said she admired Candlelight activists for persisting under threats, but the party could not compare to the coming together of Rainsy and Sokha. There was confusion around who was really behind Candlelight, which is a rebranded Sam Rainsy Party.

“Most people are not clear on this point. So it prevents the Candlelight Party’s votes from increasing,” Sreysros said. “There is a division within the opposition side into two poles so the votes also get broken up.”

Sok Touch, president of the governmental Royal Academy, said Candlelight didn’t have the resources to match the CPP, especially when it came to funds and the quality of its activists. Candlelight had only come together as a political force a couple months before voting day.

“The people lack ability. [They] have plenty of agitators but lack real doers who take a firm stance,” Touch said.

“An election is free and fair only if the participants face no threats and all parties have equal freedom,” Sovannara said. “The referee needs to be fair and build confidence for the general public and for all parties. This is important work, but if the referee loses balance or common sense, it makes the participants not believe.”

The Khmer National United Party’s Nhek Bun Chhay, however, does not think the results of Sunday are so bad for Candlelight, considering that the party was so newly emergent.

“They had such a short time to organize, but still they had a lot of supporters,” Bun Chhay said. “It’s still a lot.”

As of Monday, Candlelight appeared to have won around 20 times more votes than third-place Funcinpec.

The national election body’s chairman Prach Chan, who is also a ruling party member, said Sunday’s election was not just free and fair, but among the best in the world. “There may be no election more honest than Cambodia’s.”