Waste-Filled Containers at Sihanoukville Port Not Ours, Canada Says 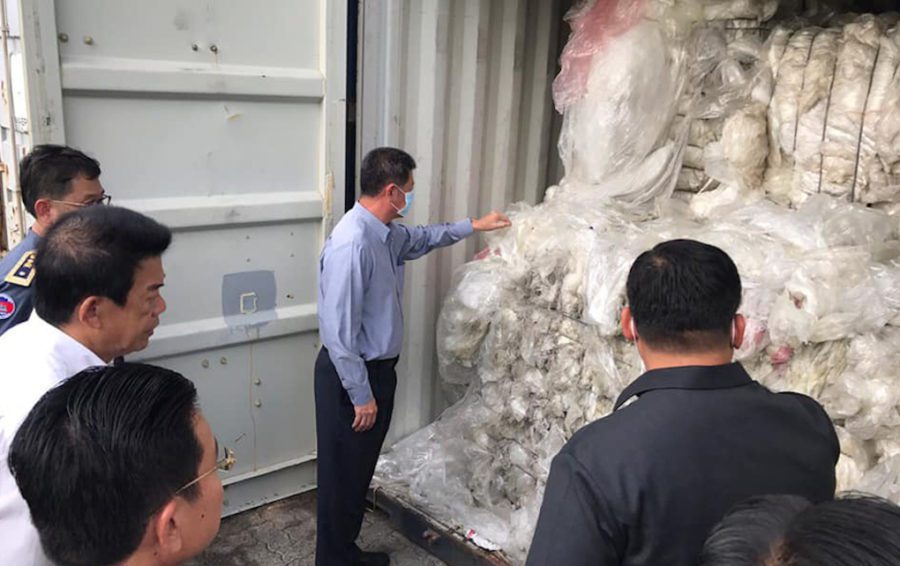 Officials unveil a container full of plastic trash in Sihanoukville in July 2019.

The environment department of Canada on Friday said none of the about 1,600 tons of plastic waste exported to Cambodia since last year originated from its shores, contradicting earlier statements by Cambodian officials who said 83 trash-filled shipping containers came from Canada and the U.S.

Cambodian authorities in July said 13 plastic-packed containers came from Canada, while 70 came from the U.S., after unveiling the contents of the containers to media at the Sihanoukville Autonomous Port and vowing to send the garbage back to its supposed countries of origin.

But the Canadian government’s Environment and Climate Change Canada on Friday said it was “made aware that the export of the waste to Cambodia did not originate from Canada and accordingly, the shipment will not be returned to Canada,” spokesperson Gabrielle Lamontagne said in an emailed statement to VOD.

Canadian Embassy officials had met with the Cambodian customs authority and the Environment Ministry, and Canada was informed by Cambodian authorities that the case of the 83 containers was “being considered a Cambodian issue,” Lamontagne said.

Customs department and Environment Ministry officials did not answer questions about the origins of the containers on Friday.

The company that imported the plastic waste to Cambodia from September 2018 to January, Chungyuen Plastic Manufacture, was fined nearly $255,000 under customs, environmental protection and solid waste management regulations, according to a joint statement from the customs department and Environment Ministry issued in late July.

The containers had passed through ports in Singapore, Malaysia and Vietnam before arriving in Cambodia, the statement said.

Chungyuen Plastic was also ordered to send the trash back to the two alleged source countries by August 24, however, by late August just 14 of the 83 containers were shipped out, with a new removal deadline for the remaining containers set for October 25 on account of shipping delays.

The U.S. has not publicly confirmed whether any of the containers originated from the country or have been shipped to the U.S.

Arend Zwartjes, a spokesman for the U.S. Embassy in Phnom Penh, declined to comment on Friday.

In July, a U.S. embassy spokeswoman said the U.S. government was offering assistance to determine the containers’ exporter and importer, but did not confirm whether any of the waste came from the U.S.

Cambodia’s revelation of the plastic-filled containers, which had been sitting at the port for months, came amid growing public criticism among Southeast Asian governments over imports of trash from industrialized countries, including the U.S., Canada and Australia.

Kun Nhim, director of the customs department, said he would reply to questions sent from VOD “when available,” but had not responded as of Friday evening.

Nhim said in July that a preliminary investigation showed that “some of the containers we have investigated are from the United States and Canada.”

“Those who imported will be punished according to the law,” he said.

“We will see by which article of the law to punish them, but surely they will be punished and the trash will be sent back to the original countries,” Nhim added.

Environment Ministry spokesman Neth Pheaktra said that month that “the 83 containers filled with plastic waste come from [the] United States and Canada.”

On Friday, Pheaktra said the government encourages “more investment in Cambodia to recycle the plastic waste” produced inside the country, but does not allow the importing of plastic waste from abroad.

He did not answer questions about the contradictory statements from Canada and Cambodia about the origins of the containers.

Lamontagne, of Environment and Climate Change Canada, said Canada had been controlling  household waste exports to countries that are part of the Basel Convention on the Control of Transboundary Movements of Hazardous Wastes and their Disposal since 2016, and “requires the prior informed consent of the importing country before the export takes place.”

“Currently, when an importing country controls imports of plastic waste, Canadian regulations require consent of the importing country, and the Canadian exporter must obtain an export permit from Environment and Climate Change Canada,” Lamontagne said.

Canada ratified the Basel convention in 1992, while Cambodia acceded to it in 2001.

The U.S. signed it in 1990 but has not ratified the convention.