‘We Will Not Remain Silenced’: Jailed Activists Are Back With More Petitions 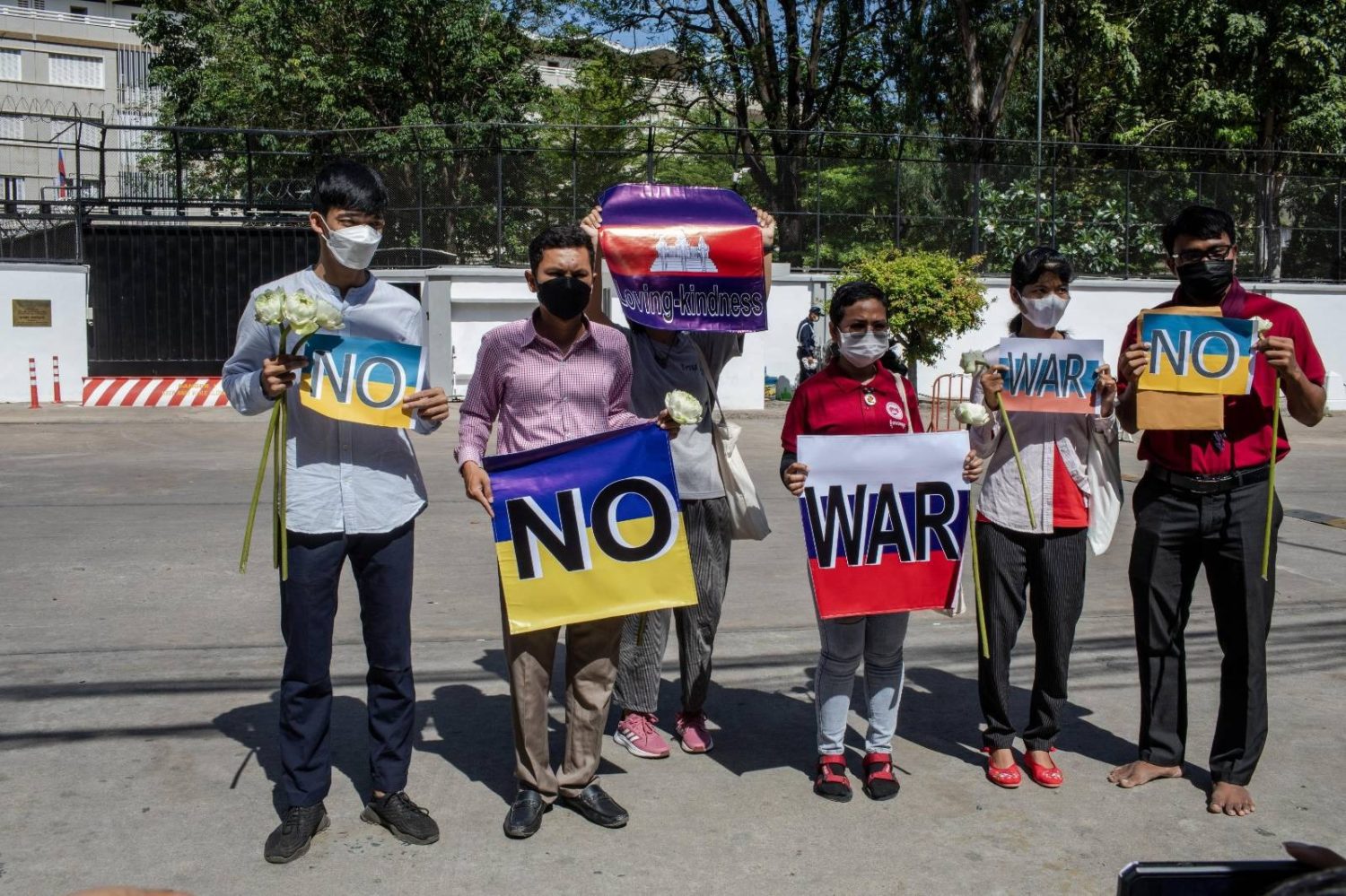 Activists from Mother Nature, Khmer Thavrak and KSILA hold signs in front of the Russian Embassy after attempting to deliver an anti-war petition on April 5, 2022. (Roun Ry/VOD)

Phuon Keoreaksmey is among six members of environmental group Mother Nature released from prison in November.

At that time, five members of activist group Khmer Thavrak and two from the Khmer Student Intelligent League Association were also freed, part of a coordinated release of what rights groups called Cambodia’s political prisoners.

On Tuesday, there was a mini-reunion outside the Russian Embassy. Keoreaksmey, alongside KSILA’s Koet Saray, Khmer Thavrak’s Hun Vannak and Eng Malai, and fellow Mother Nature activists Thun Ratha and Ly Chandaravuth, attempted to hand a petition on the war in Ukraine to the Russian diplomatic mission.

“We stand with you, understand your plight, even if we live in a country where freedom of expression is restricted,” she said of their message to Ukrainians.

She hoped for peace in Ukraine as soon as possible, and especially gave her support to the women and girls in the country, she said.

When it comes to delivering petitions, Keoreaksmey has been particularly active in recent weeks. Early last month, she called on Phnom Penh district governors to clean up sewage canals clogged with plastic trash — and there was action seen within weeks. Last week, she was in Siem Reap, urging provincial officials to stop sewage discharges into the city’s river.

Though her colleagues have varied at each instance, they have often featured other recently jailed activists.

Keoreaksmey said she and other activists were simply continuing their activities. Petitions were the first of their activities since being released from prison, and actions will continue, she said.

For her, they would focus on environmental issues, Keoreaksmey added, emphasizing that what she was doing was within the law.

Of the Ukraine petition, KSILA’s Saray said the hope was for an end to the war to prevent further deaths. But the Russian Embassy had not accepted their petition, he said.

“Cambodia is a country where we have gone through a full-blown war, and it is painful for the Cambodian people who do not want to see any country in the world in the flames of war,” Saray said.

“We want to express our concern that the Khmer people do not want to see war in Ukraine,” Mother Nature’s Ratha added.

Soeng Senkaruna, spokesperson of rights group Adhoc, said it was a shame the Russian Embassy had not accepted the activists’ petition.

For ruling party spokesperson Sok Eysan, however, Tuesday’s events on Sothearos Blvd. would be hardly of note for the geopolitics of the war in Ukraine.

“A small group of students in a small country like Cambodia — whether Russia cares or not — it would not seem to be,” Eysan said.

Countries around the world were trying to tell Russia what to do, but so far it did not seem to be showing any intention of listening, he added.

Correction: An earlier version of this article misstated Thun Ratha’s affiliation when attributing his quote.