Weddings to Be Halted Nationwide as More Legislation Sets Out Penalties 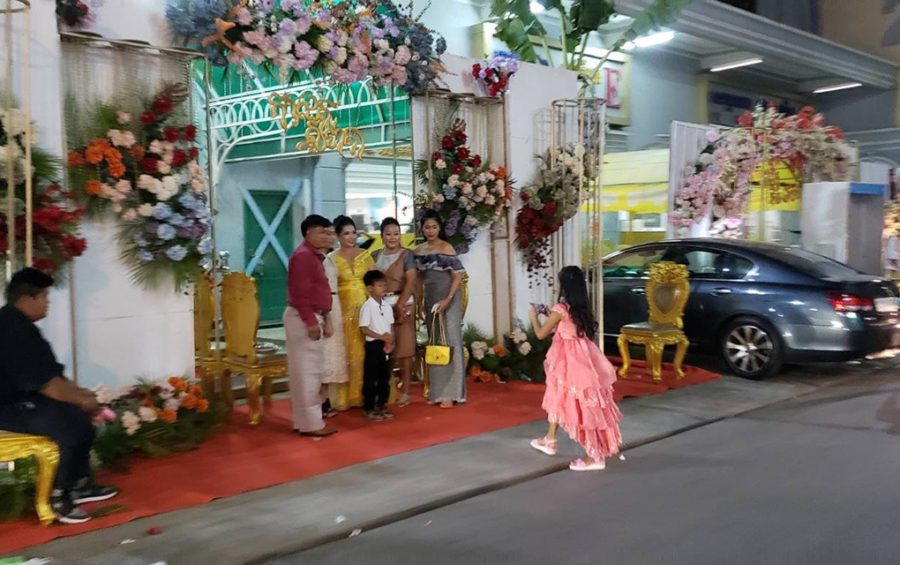 A group of people poses a photo at a wedding hall entrance at Phnom Penh’s Lucky Star Hotel on February 21, 2021, the day the “February 20” Covid-19 cluster was announced. (Danielle Keeton-Olsen/VOD)

The new sub-decree, which was signed on Friday, sets out penalties for overcrowded shops as well as people not wearing masks according to Health Ministry instructions.

It does not say when and where masks and social distancing are required, but says the ministry can designate occupations, groups and businesses that must comply with health measures. Social distancing is 1.5 meters, it says.

The sub-decree also notes that the new Covid-19 Law — which sets out jail terms for violations of health measures — can also apply to those cases.

The law, which was passed last week, has penalties up to 20 years in jail for intentionally spreading a disease. Business owners who violate the law could see their licenses’ suspended or establishments closed, the law adds.

During a press conference on Monday, Justice Minister Keut Rith defended the law, which has been called “draconian,” saying it was drafted after researching other countries’ legislation and was about “protecting our people’s lives.”

The Health Ministry also announced 20 new cases of Covid-19 on Monday as part of the country’s worst outbreak to date.

In an audio message, Hun Sen requested on Monday that all provinces suspend weddings to prevent the disease’s spread.

Hun Sen in particular pointed to a case in Takeo province, where a Phnom Penh man visited a wedding with nearly 900 attendees on Friday before testing positive for Covid-19 on Sunday. He was in direct and indirect contact with about 400 people, according to a statement by the provincial governor, leading to 17 schools in two districts being closed and one village locked down.

Authorities in the provinces of Kampot, Banteay Meanchey, Battambang and Pursat on Monday joined several other provinces in issuing orders suspending weddings and religious celebrations.

Phnom Penh, Kandal, Prey Veng and Preah Sihanouk, which have been the worst hit by the current outbreak, have already announced school closures and other restrictions.

Koh Kong province over the weekend also widened its school closures to the entire province, with about 10 active Covid-19 cases there.