When a Unionist Took Her Grievances Online, Police Came Knocking 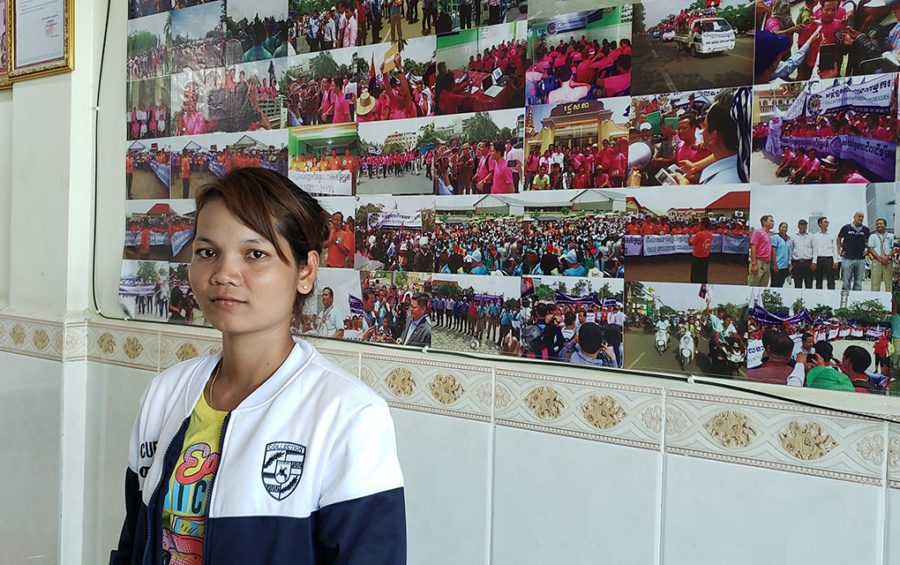 At Kampong Speu province’s Superl garment factory, Soy Sros does not just make handbags for international buyers. She has led her union branch for years, speaking up for members and tracking working conditions and labor violations on behalf of the 700 unionized workers at Superl, about half of the factory’s total employees.

So when managers posted a list of names of 88 workers who wouldn’t have their contracts renewed after the end of March due to dwindling handbag orders during the pandemic-driven economic slowdown, and all of them were members of her union, Sros made a serious effort to speak with factory management.

She said she spent the entire day of March 31 trying to talk to a human resources manager about the job losses, and when the administrator refused to talk, she took to Facebook that evening out of frustration.

“The owner of Superl factory defied the government’s recommendations as well as the appeal from the Ministry of Labor, because the company has ended employment contracts for not only normal workers but also a six-months-pregnant worker,” she wrote in a post.

Sros said she meant to ask the factory to retain workers by temporarily suspending them rather than ending their contracts, as officials had urged earlier this year in an effort to prevent job losses amid the Covid-19 pandemic. Instead, Superl management filed a complaint against Sros that landed her in jail for nearly two months, in a case that labor advocates say has been insufficiently resolved.

In an interview this month, Sros said she thought she had a good working relationship with the factory’s management, but she suspected managers were surprised by the fact that she would post her grievances online, and that the post would draw such a large response from her coworkers.

Colleagues shared her post through the night, and the next morning, a Superl representative called her in for a meeting and told her that the workers would not be fired, just suspended for one month while demand for handbags was slow. The factory also wanted her to retract her Facebook post and state that she had written false information. While Sros did decide to take down the post, she refused to admit any wrongdoing.

“[Superl managers] asked me to sign a warning letter as well as sign another letter to accept that it was my fault, everything was my fault,” she told VOD. “They wanted everything back to normal, but I didn’t agree with them because everything I posted was based on what happened, based on facts.”

On April 2, Sros said she was called into the factory office to meet police officials, who arrested her and questioned her for about 48 hours before sending her to the Kampong Speu provincial prison on a charge of incitement to discriminate.

“I didn’t expect that the factory would do that to me,” she said at the Phnom Penh office of the Collective Union of Movement of Workers (CUMW), the union that represents her factory. “I thought that we were partners and we worked together for everyone’s progress.”

While workers were temporarily suspended for a month, compensated for the suspension and brought back to work in late May, Sros was imprisoned for one month and 26 days. She said she slept in a cramped space up against other prisoners and was often sick while incarcerated.

“My parents were very upset and they had been stressed out and worried about me,” said Sros, who is a single mother of two, providing for both her children and parents. “They imagined how difficult life was over there, and also all my family is depending on me.”

Sros was released on bail in late May, but the charge against her is still pending. If convicted, she faces one to three years in prison and fines of up to 6 million riel ($1,500).

A Kampong Speu Provincial Court prosecutor declined to answer questions from VOD without being provided the name of the judge in charge of Sros’ case.

Sros’ lawyer declined to speak with VOD publicly and Sros could not be reached on Friday to confirm that she was still facing the charge.

But Khun Tharo, program manager at labor rights group Central, which has been following Sros’ case, said the incitement charge against her had not been dropped and the case was still pending before an investigating judge.

Pav Sina, CUMW’s national president, described the court’s decision to release Sros on May 28 as a surprise. The day before, a Kampong Speu judge had denied Sros’ request for bail, but the next day, prison authorities called CUMW and asked the union to pick up Sros from prison.

Sina said the sudden change was due to outside pressure. He had contacted four international labor rights groups — IndustriAll, Clean Clothes Campaign, Workers Rights Consortium and Solidarity Center — to assist with Sros’ case.

“The campaign [to free Sros] would not have succeeded without international involvement,” he said. “As we see how it happens in Cambodia, the local legal system doesn’t work properly, so our union had been in touch with the big international organizations…[which] had pressured the big brands.”

Andrea Shaw Resnick, global head of investor relations and corporate communications for Tapestry, the parent firm of the Kate Spade and Coach brands, told VOD in an email on June 10 that Tapestry contacted Superl management in both Hong Kong and Cambodia.

Shaw Resnick said the company is looking into Sros’ case and Superl Group has complied with requests for information, but Superl had denied allegations from Sros and the union that the company is targeting union workers.

“It is our understanding that Superl Cambodia and CUMW have met and discussed the incident directly,” she said. “We have also been told that they will meet together again, along with [the] worker at issue from the incident.”

In late April, Capri Holdings, the luxury fashion group that includes Superl buyer Michael Kors, announced in a press statement that it had signed the U.N. Global Compact, a pledge that businesses will uphold human and labor rights, including freedom of association, allowing effective collective bargaining and stopping discrimination in employment.

The company did not respond to emailed questions. When reporters tried to reach Superl management in Cambodia, a Chinese factory manager, who would not give his name, declined to comment.

Chek Borin, head of the Kampong Speu provincial labor department, also declined to answer questions, saying Sros’ case was not under his jurisdiction.

Shortly after the union leader was released, the factory withdrew its complaint on June 3, and 10 days later Sros signed an agreement with Superl’s general manager, Chan Dao Zen, to drop the company’s criminal complaint to the Kampong Speu court and present the agreement between the company and union leader if Sros is called to court.

The document, viewed by reporters, grants Sros almost all of her demands: She resumed work, was given back pay and was promised that the company would not discriminate against her, though she did not receive damages.

The labor incident between Sros and Superl comes a few months before the E.U.’s decision to partially withdraw Cambodia’s “Everything But Arms” (EBA) duty-free trade benefits with the bloc is set to go into effect in August, in part due to labor rights abuses.

In its February decision, the European Commission said that open criminal and civil cases against labor activists and union leaders are infringing on workers’ rights and “should be resolved without delay.”

William Conklin, Solidarity Center’s country director, said the travel goods sector, which includes handbags like those made at Superl, is fairly new to Cambodia after a U.S. duty-free trade scheme was extended to travel goods produced in the country in 2016. He said he hoped that brands would take Sros’ case seriously.

Getting her job back and back pay does not address what she had to go through, according to Conklin.

“The fact that [the dispute] has seemingly been resolved is a good outcome, but she spent two months in jail and she had health issues, and it would be a traumatic experience for anyone,” he said.