Why Is Hun Sen Cutting the Number of Four-Star Generals? 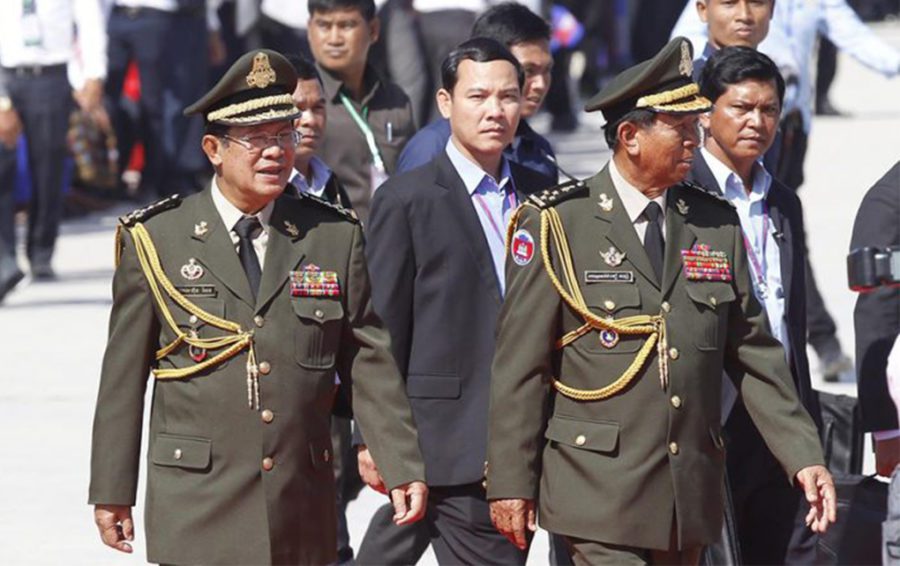 Prime Minister Hun Sen announced last week he would cut the number of four-star generals in Cambodia to only two people: Defense Minister Tea Banh and military commander Vong Pisen, who was appointed to the top position in September.

The decision by Hun Sen — who himself is Cambodia’s sole five-star general — has led many to ask why the government has chosen to limit the number of stars at the Defense Ministry at this time, after years of queries about rank inflation.

Notably, the measure has been announced at a time of some internal turmoil in the country and threats from without in the form of pressure from the U.S. and Europe.

The European Union (E.U.) in February began a six-month re-evaluation of Cambodia’s eligibility for its “Everything But Arms” (EBA) tariff-exemptions scheme due to concerns about the government’s rights record and political repression.

The U.S. too has threatened to withdraw Cambodia’s tariff-free access to its markets unless the government responds to its concerns. The threats of tariff reintroduction — if they came to fruition — could severely impact the jobs of the more than 700,000 garment workers who form the backbone of the country’s economy, in an industry with tight margins and many regional competitors.

Hun Sen’s decision also comes off the heels of repeated recent calls from former opposition leader Sam Rainsy — the “acting leader” of the Cambodia National Rescue Party (CNRP) — for soldiers to rebel against Hun Sen and oust him.

Rainsy, who has lived in Paris since November 2015 after a years-old court case was rekindled against him, has appealed to the military to follow the example of Sudan’s military who toppled their leader after internal conflicts led to protests.

Kim Sok, a political analyst who moved abroad after his release from an 18-month prison sentence last year for comments he made about Hun Sen on radio, said he did not believe the prime minister’s decision was intended to benefit the nation.

After all, he said, Hun Sen’s own personal bodyguard unit is still better trained and equipped than any unit in the Defense Ministry. Rather, Sok speculated, the move to cut the number of four-star generals to only the defense minister and top commander of the military may be linked to Hun Sen’s succession plans.

The elevation of the relatively unknown Pisen to the military’s top command role last year coincided with the appointment of Hun Sen’s heir apparent — his eldest son, Hun Manet — to the role of the military’s deputy commander at age 40.

Cementing his son’s stature in the military made more sense than the idea Hun Sen had suddenly come around the idea that rank inflation was a bad look.

“Rather, he strengthens the military that is under his family’s power and that is managed by his family in order to protect his own family,” Sok said.

Previous reports have estimated that Cambodia has more than 2,000 generals in the military, with at least 13 of them four-star generals.

Lao Mong Hay, another prominent analyst and former adviser to opposition leader Kem Sokha, who remains under house arrest in Phnom Penh, said reducing the number of top-level generals would make the military’s true pecking order more clear. This would make it easier for the top generals to manage things, he said.

He said true military reform would aim for a more neutral armed force — instead of the current one where top commanders are members of the politburo of Hun Sen’s Cambodian People’s Party or even direct family members of the prime minister.

“Their participation in political activity is a legacy of the communist system that relied solely on the military in order to take power,” Mong Hay said. “Mao Zedong, the Chinese liberation leader, said political power grows from the barrel of the gun.”

Ly Srey Sros, a young political analyst, said many people had long expressed distaste for the large number of high-ranking generals in posts and mused that the growing numbers of top leaders did little to prevent crimes such as corruption.

She said she believed it could be a legitimate response to such criticism and that Hun Sen likely felt he had more scope to make such changes to the military than other countries where government control of the military was less assured.

This undermined Rainsy’s appeals for military-backed coups, she explained.

“Cambodia’s economy remains better than in Venezuela and also, in part, the shared ground between military and government [in Cambodia] may be stronger than between Maduro and military commanders in Venezuela,” Srey Sros said.

San Chey, executive director of the Cambodian Social Accountability Alliance, said he also thought reducing the number of high-ranking generals was in fact a useful reform given that Cambodia has more generals than other much larger nations.

However, he said the move would have little impact if the government only reduced the stars held by military leaders who still remained steadily involved in high-level crimes such as pilfering the nation’s national resources and stealing people’s land.

Nonetheless on Monday, Rainsy, the CNRP “acting” leader, continued in his calls for the military to help oust Hun Sen and described the reduction in the number of stars held by generals as a reaction by Hun Sen brought on by fears of a coup.

The defense minister, though, with his four stars intact, had already offered a response on his own Facebook page that morning. “Soldiers have to respect and strictly follow the orders from their superior no matter how difficult the situation is — and have to have the courage to sacrifice everything,” General Banh wrote.