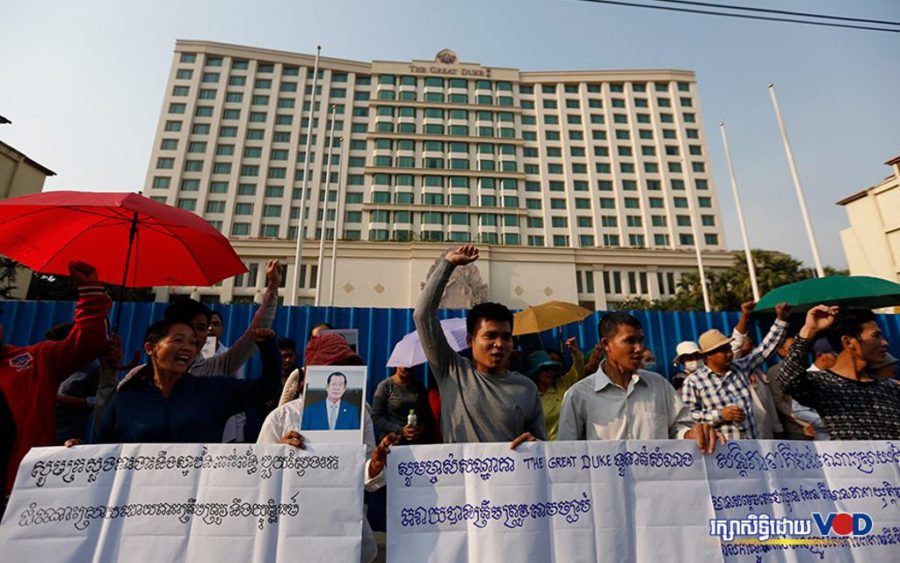 The Great Duke’s employees protest in front of the hotel on January 20, 2020. (Panha Chhorpoan)

More than 100 former employees of the shuttered Great Duke Phnom Penh hotel protested on Monday morning in front of the hotel demanding that their seniority payments and other benefits get paid out.

Touch Kosal, head of the Tourism Workers Union at the Great Duke — formerly the InterContinental — said the protesting workers had a list of demands, including severance, unused annual leave and compensation since the company allegedly failed to give adequate notice about their firing.

The employees would march to the Labor Ministry seeking intervention if they did not receive the payments, he said.

“We came today seeking justice based on the law. Let the hotel respect the law,” Kosal said.

The hotel closed its operations on December 31, after 23 years on the premises, citing business reasons.

Chhoam Samphors, a cook at the hotel, said she had worked there for 12 years. The company had so far agreed to pay some of the compensation that the workers were demanding but not all, she said.

“Most of the employees who came do not have jobs,” Samphors said. “Since the hotel closed, I’ve had to borrow money from relatives to pay the bank to pay for rent and food.”

Ly Tayseng, a lawyer acting for the Great Duke hotel, said the company was in discussions with the Labor Ministry to find a solution to the dispute.

Labor Ministry spokesman Heng Sour said in a message that if the two parties do not agree, the ministry will take the case to the Arbitration Council, noting that according to initial reports the company behind the hotel was not bankrupt.

According to EuroCham, the hotel rebranded under the management of the Regency Company. Data from NGO Global Witness says the company’s shareholders have included the Thai Boon Roong Group, which has floated a proposal for $3-billion, 133-story twin skyscrapers in Phnom Penh.