Workers Say They Will Resume Protest, Despite Late-Night Exit from Testing Facility 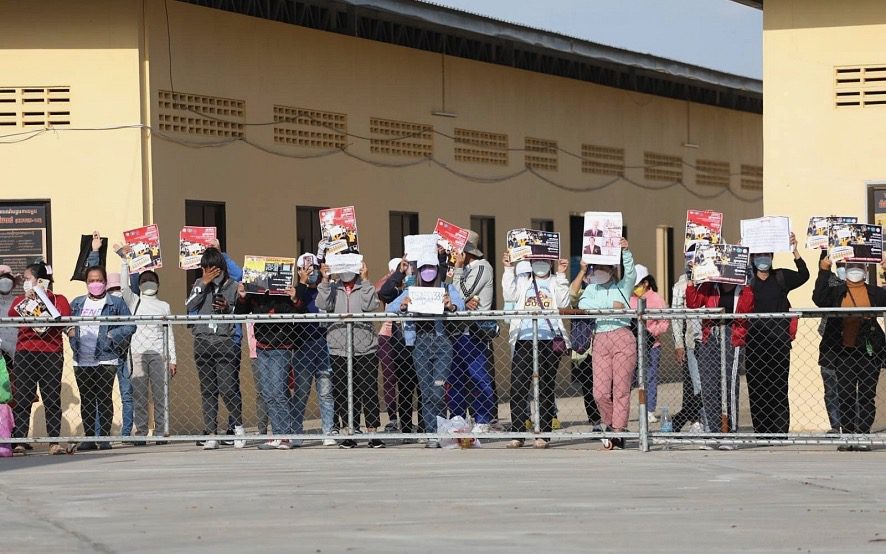 NagaWorld strikers continued their protest at a Prek Pnov quarantine facility on Monday, after they were detained there and two people tested positive for Covid-19. (Licadho)

NagaWorld union workers said they will return to the casino complex to continue their strike on Tuesday, after about 60 of them were detained on Monday and taken to a Prek Pnov facility to get tested for Covid-19 before being released just before midnight.

Those who spoke with VOD said the group was made to sign a contract promising not to go back on strike before being allowed to leave at about 11 p.m. Monday. Two of the detained workers tested positive for the virus and were taken to a hospital for quarantine.

Members of NagaWorld’s Labor Rights Supported Union (LRSU) said today they will continue their strike at 2 p.m., with one worker saying those who were detained yesterday will stay away from the Tuesday protest.

Ros Lyheng, who was not part of Monday’s protest, said he would join Tuesday’s activities and was not afraid of the legal consequences.

“I’m not afraid. Why should I be afraid if we just demand the right to work and there is nothing wrong with the law?” he said.

Mam Sovathin, a worker who was at the Prek Pnov facility, said the 64 workers detained on Monday will rest on Tuesday and that their peers would continue the strike.

Rithy Ratana, another worker detained on Monday, said she wants to return with the group but would take the day off. She added the casino company must solve their grievances without using Covid-19 as an excuse.

A potential deterrent for the detained workers could be the contracts they were made to sign on Monday promising to stay away from gatherings and illegal demonstrations. Those contracts stated that if the workers persisted or were “stubborn” officials would take legal action.

Sovathin said the workers were reluctant to sign the contract initially and had added handwritten text to the contract that effectively voided the document.

Officials were not pleased with that and tried to get them to sign the original text of the contract or remain at the facility.

“They don’t accept what we write down. The second contract we just put our names and thumbprints [on it],” she said.

On Monday night, Sovathin said the quarantine facility — which is at the Cambodian Women for Peace and Development center — had no basic facilities, including beds and mattresses.