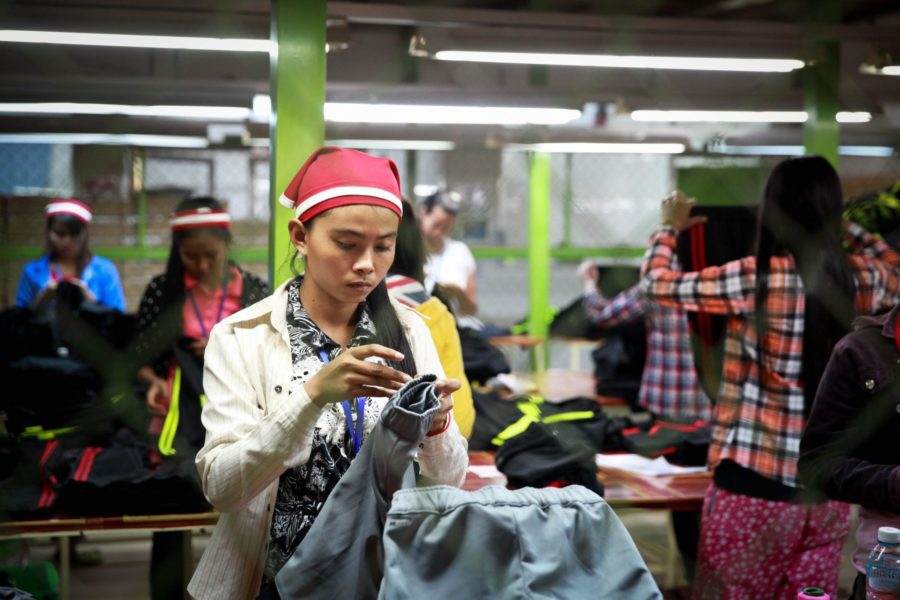 Garment workers in a factory in Cambodia on December 9, 2014. (ILO)

The Labor Ministry on Friday ordered workers who traveled to the provinces during the Khmer New Year holiday this week to isolate themselves for 14 days before returning to work in order to prevent the spread of Covid-19 in the labor force.

Factory and other workers who took leave with permission from their employers will be paid the value of seven days of their salary during the isolation period, but those who did not receive permission will not be compensated for the two weeks, a ministry statement said.

Any worker who traveled over the holiday but does not comply with the isolation order could be fired from their job without benefits, it added.

The public holiday period from Monday to Thursday — when millions typically travel to their hometowns to visit family — was canceled and travel restrictions imposed until Thursday morning. However, the Health Ministry on Wednesday asked Labor Ministry officials to take measures after some people managed to travel across provincial borders despite the ban.

In a directive posted to the Labor Ministry’s Facebook page, the ministry instructs employers to compile a list of workers who were absent from work this week, and asks workers to isolate themselves at home, in dormitories or a designated facility, according to guidelines from doctors or authorities.

Workers must check in with company management daily via phone by 8 a.m., and companies will in turn update Labor Ministry officials if any workers report symptoms of Covid-19, the directive says.

Employers should pay pregnant workers and others in special circumstances their full wages for 14 days, the ministry says.

Once they complete the two-week isolation period, workers must wear face masks and sanitize their hands when they return to work.

Labor Ministry spokesman Heng Sour did not respond to requests for comment, but he told government-aligned media outlet Fresh News this week that about 95 percent of workers in the garment, footwear and travel bag sectors had continued working over the holiday.

The industry employs an estimated 800,000 to 1 million workers.

Ath Thorn, president of the Cambodian Labour Confederation, on Thursday estimated that 100,000 people had returned home for the holiday.

On Friday, Thorn said he agreed with the government’s preventative health measures but the requirements set up by the ministry could be difficult for workers to meet, and failure to comply could be used as a pretext by employers to fire workers at a time when factories lacked materials to keep production running.

About 100,000 workers have already been affected by factory suspensions related to the Covid-19 economic downturn this year, Sour said earlier this month.

Thorn told VOD that if hundreds of workers called supervisors at 8 a.m. each day as required but could not reach them, or health centers did not provide required medical documentation, workers could face more difficulties.

The union leader suggested that the ministry send doctors to check workers’ health where they were staying to ease requirements.

No new cases of Covid-19 have been reported since Sunday, and nearly 100 of 122 total coronavirus patients have recovered, according to the Health Ministry’s latest update.

In addition, the Senate on Friday approved a draft state of emergency law that gives broad powers to the government to restrict citizens’ movement and communications, and declare martial law during national emergencies.

The law was unanimously passed by the National Assembly last week and now must be reviewed by the Constitutional Council before final approval by the king or acting head of state.

The draft law has been criticized by U.N. special rapporteurs and human rights groups, who have cited vague language and the potential for rights abuse, while officials have defended the law as necessary to manage national emergencies and protect citizens during public crises.

Rhona Smith, the U.N. special rapporteur on the situation of human rights in Cambodia, said on Friday that emergency measures must be “necessary and proportionate” to the crisis at hand.

“The broadly worded language on the protection of national security and public order, ostensibly aimed at addressing COVID-19, can potentially be used to infringe on the right to privacy and unnecessarily restrict freedoms of expression, association and peaceful assembly,” Smith said in a statement.

“Compared to other Asian and European countries, Cambodia’s draft law is more lenient in terms of powers and punitive actions,” the mission claimed in a statement.

On Thursday, the Foreign Affairs Ministry said the government was extending a temporary ban on travel into the country for foreigners from France, Germany, Iran, Italy, Spain and the U.S. until the Covid-19 pandemic subsides.

The government also announced on Friday that schools would continue to be closed nationwide until further notice.