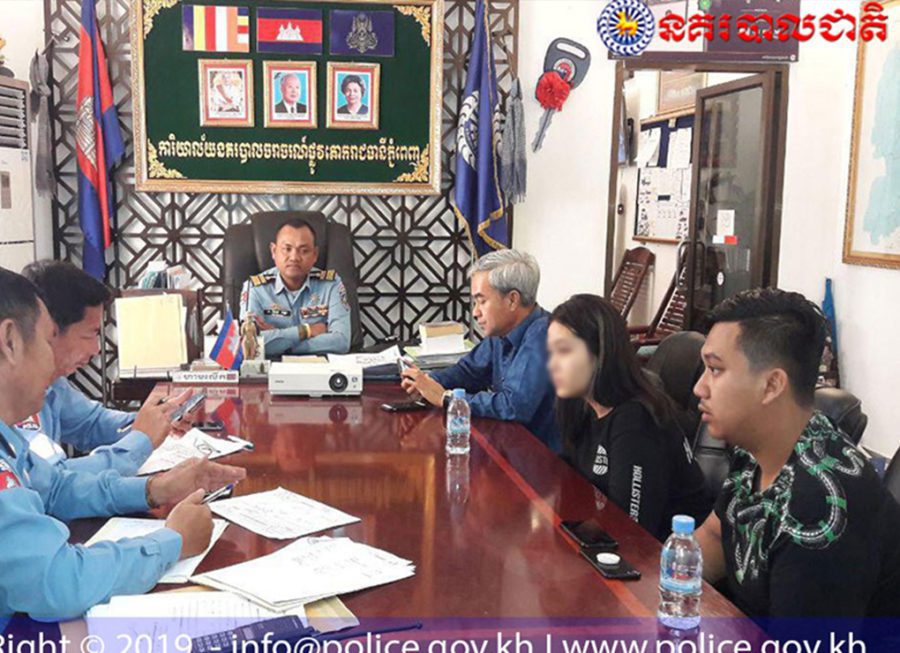 A young woman suspected of killing a scholarship undergraduate literature student when she sped her Range Rover SUV through a busy intersection in Phnom Penh on March 26 was provisionally charged by the court prosecutor after turning herself in to municipal police.

Yin Khun Mey, who goes by Mana, believed to be 17 years old, caused social media outrage after video emerged of her speeding in a black SUV through the intersection of St. 317 and St. 528 in Toul Kok district’s Boeng Kak I commune and hitting a motorbike driver.

The court prosecutor provisionally charged Khun Mey with driving without care or attention resulting in the death of others under the Traffic Law, a crime carrying a jail term of one to three years and a fine of 4 to 15 million riel (about $1,000 to $3,750), said Ly Sophana, a court spokesman.

Khun Mey handed herself in to Phnom Penh Municipal Traffic Police on Friday after Prime Minister Hun Sen and municipal police chief Sar Thet ordered authorities to find the person who killed the promising undergrad student and only child.

The penalties can increase to two to five years in prison and 10 to 25 million riel in fines ($2,500 to $6,250) if the driver had no license, was under the influence of alcohol or escaped from the scene of the accident.

Khun Mey was passed onto a judge for further processing, and was yet to be formally charged or a decision made on whether she would be detained or bailed.

The victim, Dum Rida, 23, was a scholarship student in the last year of her Khmer Literature degree at Paragon International School. She lived just outside the city in Prek Ta Meak commune of Kandal province’s Khsach Kandal district.

The traffic accident sparked an outpouring of public anger and condemnation of the perpetrator, with many demanding that authorities make an arrest and ensure legal action is taken. Rumors on social media suggested that Mana was the daughter of a prominent Siem Reap province businessman and a U.S. dual citizen. The father, Yin Geck, later posted on social media that Mana suffered from anxiety and would faint at the sight of police.

When Khun Mey had not reported herself to police by Thursday, Thet publicly announced that he would give give three days for the offender to turn herself in and be punished by the law or else face arrest by the police.

Phat Pov, 50, the mother of the victim, in a March 29 complaint to police requested $200,000 in compensation for the loss of her daughter. She said video of the incident clearly showed Khun Mey driving at a high speed south along St. 317, before plowing into her daughter and crushing her against a gate.

Pov’s police complaint says that the literature student, on the other hand, was driving slowly along St. 528. It notes the offender made no effort to stop and help her after the crash and instead sped up further to escape the scene. It also requests that the perpetrator be punished to the full extent of the law.