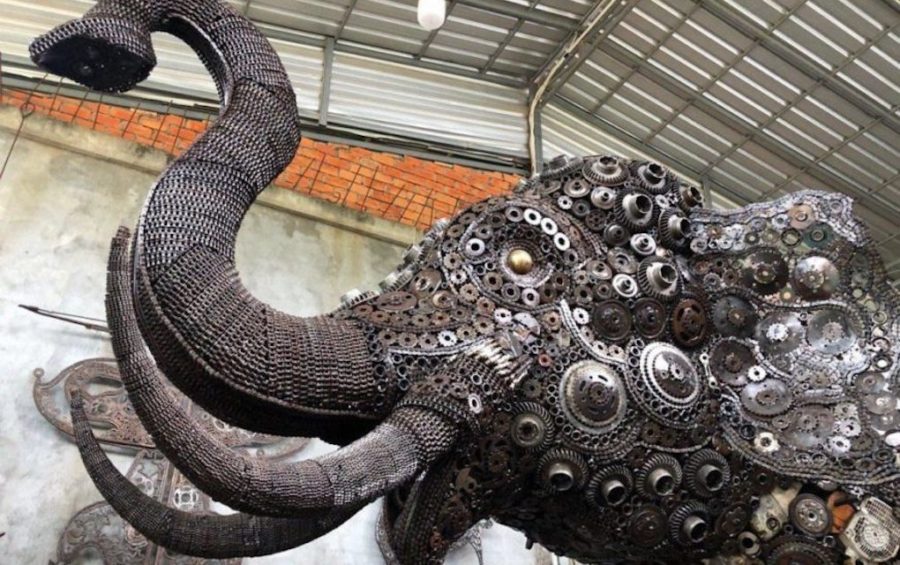 Three-hundred chainsaws confiscated from illegal loggers have been disassembled into pieces and reconstructed into a metallic elephant sculpture that authorities hope will raise awareness about conservation in Mondulkiri province.

The Environment Ministry, which unveiled the sculpture on Sunday, said it would soon be put on display at Sen Monorom park.

Ministry spokesman Neth Pheaktra said the project, which cost $17,500, was intended to bring attention to elephant preservation and hopefully attract tourism to the province.

“We wanted to show that chainsaws were the means of encroachment,” he said, referring to widening damage to Mondulkiri’s forests, a natural habitat for wild elephants. “The intention is to stop the use of chainsaws, which has led to this natural destruction.”

About 500 wild elephants remain in Cambodia, 375 of which are in Mondulkiri and the remainder in the Cardamom Mountains in the country’s southwest, he said.

“We want to remind people to participate in protection and elephant preservation, and we aim to increase income from tourism in Mondulkiri,” Pheaktra said.

It was modeled after a baby elephant, Chhouk, which lost a leg in a trap in the province’s Srepok Wildlife Sanctuary in 2007, the statement said.

Chhouk was rescued and given an artificial leg, and currently resides in Phnom Tamao Wildlife Rescue Center, the country’s largest zoo, which is located 36 km south of Phnom Penh.