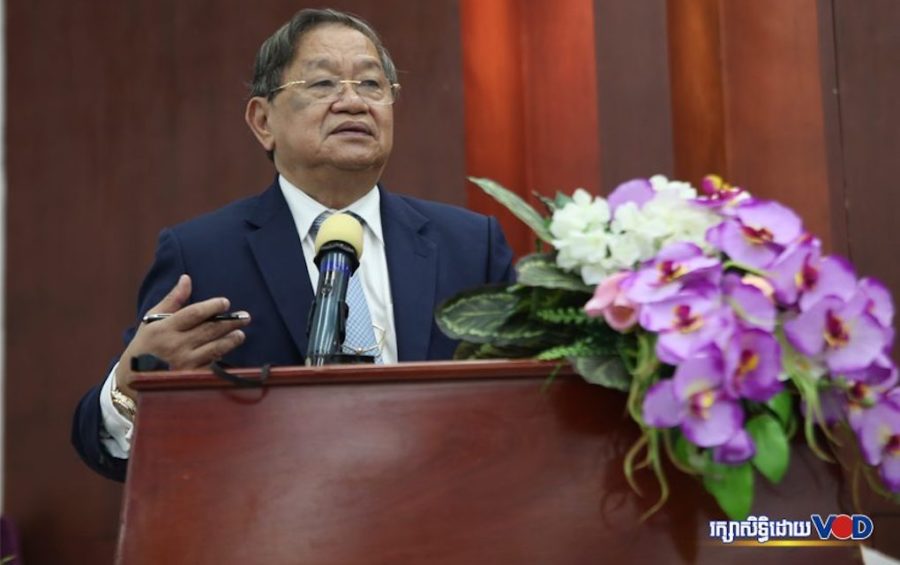 Cambodia’s draft access to information law is of “average quality” if compared to international standards, an expert who has analyzed the draft law said on Wednesday.

On Tuesday, Information Minister Khieu Kanharith touted the long-pending legislation for being in line with international standards.

At an event marking International Day for Universal Access to Information, Kanharith said the draft law would minimize the amount of state secrets in accordance with international standards for good governance and administrative system reforms.

“First, the state has to minimize to the smallest amount the so-called confidential information. This is an international standard,” Kanharith said.

But in reference to indicators from the nonprofit Centre for Law and Democracy, which rate countries’ access to information laws, executive director Toby Mendel said Cambodia’s draft law was of “average quality vis-a-vis these standards.”

The center ranks nations’ information access laws using 61 indicators, including whether they institute a “clear and relatively simple” process to request “all material held by or on behalf of public authorities which is recorded in any format, regardless of who produced it.”

They also assess whether the laws provide for an independent oversight body, with members who do not have “strong political connections,” as well as sanctions against those who willfully undermine access to information such as by destroying documents without authorization.

Cambodia’s draft law was “very weak in terms of appeals, because it fails to establish an independent oversight body or even give this role to an existing body,” Mendel said in an email on Wednesday.

However, he added, “It has reasonably broad scope and some strengths in the areas of procedures and exceptions.”

The law has been drafted in collaboration with the Information Ministry, the U.N. Educational, Scientific and Cultural Organization (UNESCO), civil society groups and foreign governments, and is intended to promote government transparency and accountability by creating legal assurances and means to attain information held by the government.

UNESCO country representative Sardar Umar Alam said on Tuesday that in order for the law to be effective, institutional capacity building to promote understanding of its usage and applications was necessary, according to his prepared remarks.

“The public has to understand how they can benefit from the law, and it is necessary to raise public awareness about the new law and citizens’ rights,” Alam said.

Mendel, a UNESCO consultant and access to information expert, said for at least 13 years the government has been reluctant to pass the law, but he hoped Phnom Penh would move it forward.

He said there would be “numerous challenges” in implementing the law in Cambodia in a way that meets international benchmarks.

“The two biggest ones initially will be to train information officers (officials who are responsible for providing information) and raising public awareness about the law,” according to Mendel.

“Then, if the law does create an oversight body (eg an information commission), that body will also need to be capacitated,” he said.

Kanharith, the minister, on Tuesday said the government tried to improve people’s access to information through mechanisms such as the creation of the Government Spokesperson Unit to publicize information about what’s happening in society, and the nationwide one-window government service offices, where citizens can apply for government-issued IDs and receive other public services.

The new law would promote the right of access to information for the people by requiring state institutions to provide documents in relation to bidding processes and the use of funds in development projects, Kanharith added.

Pen Bona, president of the Club of Cambodian Journalists, said the law was a mechanism to push for transparency.

“When it is introduced, it will become a mechanism that clearly guarantees that journalists as well as the public get clear information because it requires state authorities to provide any information that they have requested,” Bona said.

Lam Socheat, director of the nonprofit Advocacy and Policy Institute, expressed concerns that the right of access to information was still being restricted while passage of the draft law was being prolonged.

Khorn Champa, a reporter for local news website Thmey Thmey, said the law should provide the opportunity for people to receive true, complete information to enable their decision-making and push for government reforms.

“It is necessary to get complete information,” Champa said. “We participate together in building society to be better and transparent.”

Representatives of UNESCO and the Swedish Embassy said they would continue to monitor and push for the law to be passed, and to further the right to access to information.

Kanharith said the draft law, which has nine chapters and 38 articles, will reach the National Assembly to be considered for adoption by the end of this year.