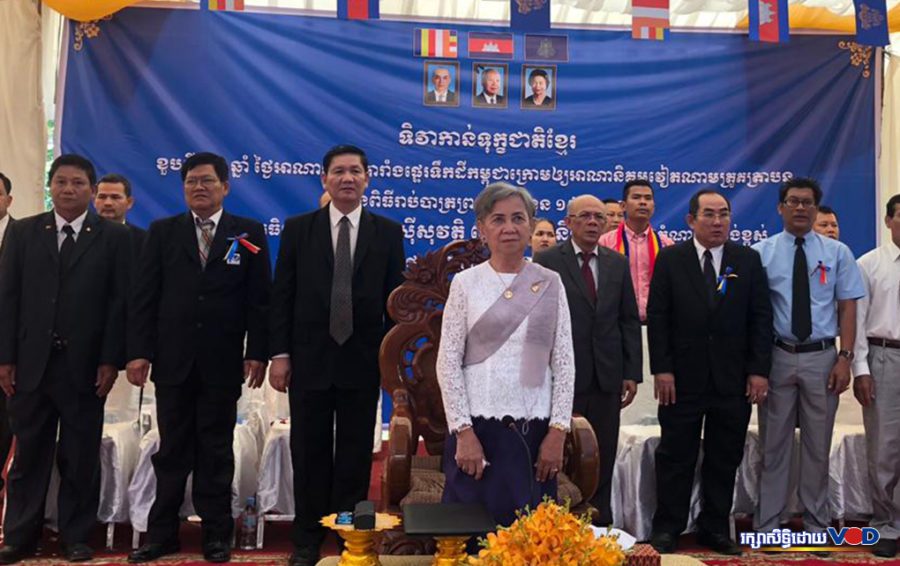 Princess Sisowath Pongneary Monipong presides over the 70th anniversary commemoration of the June 4, 1949, cession of Cochinchina colony from France to the State of Vietnam. Image: Pich Chamrong

At a muted ceremony on the outskirts of Phnom Penh, a few hundred Cambodian nationalists gathered Tuesday morning to mark 70 years since France’s cession of its Indochinese colony of Cochinchina to the newly proclaimed State of Vietnam.

For those gathered, the day — June 4, 1949 — marked a grave injustice. Known to most Cambodians as Kampuchea Krom (or “Lower Cambodia”), the territory covering most of today’s Southern Vietnam was not, in their view, France’s to give away.

Instead, the territory represented another 21 provinces integral to the Cambodian nation and land that had for centuries been in bitter dispute with invading Vietnamese before the arrival of the French colonists — but land always sovereign to the Khmer people.

For those gathered at the event, it was an affront that the day was not a national commemoration like January 7, 1979 — which is celebrated by the government for the Vietnam-backed overthrow of Pol Pot that brought it to power.

“In our country of Cambodia, it seems like we are different from the others,” Thach Setha, executive director of the Kampuchea Krom Community and a former opposition senator, told the ceremony, asking why the government did not mark the occasion.

Each year, the event is also presided over by Princess Sisowath Pongneary Monipong — a granddaughter of King Sisowath Monivong, who ruled between August 1927 and April 1941, eight years before the French ceded the Cochinchina colony to the Vietnamese — and who is sent as the official representative of King Norodom Sihamoni.

Always more demure in her speech than others, Princess Pongneary Monipong noted that she had never visited any of the ethnic Khmer communities still living in Southern Vietnam but that she was proud to represent the royal family at the annual event.

“I am not a politician; I only speak the truth: I never thought I would have joined with you, the Khmer people of Kampuchea Krom, over these 20 years,” Princess Pongneary Monipong said, admitting she knew little of the territory until she started attending the events.

“I have Khmer Krom blood — but from my mother and not my father, the king — and up to now, I lived my whole life here, not even knowing Kampuchea Krom or where it is located.”

Still, the anniversary of June 1949 has long drawn emotional reflections on the historical whittling away of Cambodia’s once vast territories — and regional prestige — and also helped focus concerns about continued Vietnamese encroachments into Cambodia.

This has proved a boon for the opposition Cambodia National Rescue Party (CNRP), which has focused its campaigns against what it sees as Prime Minister Hun Sen’s subservience to Hanoi, which installed the precursor to the Cambodian People’s Party (CPP) to head the government in Phnom Penh after its ouster of Pol Pot in January 1979.

Opposition figures and royalists alike have long accused the CPP of continuing to cede territory in a continuation of the mistakes that led to the loss of Kampuchea Krom.

Former CNRP lawmaker Um Sam An, who was released from prison in August last year after spending 2.5 years behind bars for saying in 2015 that Hun Sen illegally ceded land to Vietnam, said the 70th anniversary continued to have relevance today.

In a post to his Facebook page, Sam An said while past kings of Cambodia had been careless in losing territory to Vietnam, the prime minister, who was installed to power by the Vietnamese during its occupation of Cambodia in the 1980s, had done so willingly.

“In Cambodia’s history, there are no Cambodian leaders who ceded land to neighbors outside of Hun Sen — besides King Chey Chettha II who took a Yuon wife,” Sam An wrote.

“The kings just let Yuon borrow the Kampuchea Krom land to live and place soldiers and then the place filled with Yuon, so the French ceded it to the Yuon in 1949. The kings never ceded land to Yuon personally like Hun Sen but did it from afar,” he said.

“So the history of Cambodia in the future — once Hun Sen loses power or dies — will write that Hun Sen was a traitor to the nation, and the only Cambodian leader in history who gave up land to the Yuon according to the Supplemental Border Treaty of 2005.”

The controversial Supplemental Border Treaty of 2005, which was supported by Prince Norodom Ranariddh’s Funcinpec party but opposed by opposition leader Sam Rainsy’s lawmakers in the National Assembly at the time, officially recognized a series of treaties demarcating Cambodia’s border with Vietnam made during the 1980s occupation.

Notably, King Father Norodom Sihanouk, who had months earlier abdicated the throne to his son, King Norodom Sihamoni, opposed the treaty as “absolutely illegal.” Worried that the new king would not sign off on the treaty, Hun Sen then threatened to return Cambodia to a republic, as it was during the 1980s, to ensure its passage. King Sihamoni signed the treaty.

Kampuchea Krom’s status before 1949 has long proved controversial, with critics of the opposition noting that Cochinchina was administered by Vietnamese lords long before the arrival of the French. However, many Cambodian nationalists claim the sovereignty of the land was never settled and that control ebbed and flowed between both sides.

To them, the arrival of the French and the creation of the Cochinchina colony in 1862 represented an interregnum in fighting over the land — with the June 1949 granting of the territory to the new State of Vietnam representing the true date of the land’s loss.

It is a point-of-dispute that has had significant consequences in the outside world.

When a Khmer-speaking Vietnamese diplomat appeared on Radio Free Asia for a program on the 65th anniversary in June 2014 and said that Vietnam had long held the proper sovereignty over the land, it caused months of protests in Phnom Penh that peaked with the burning of the Vietnamese flag outside Vietnam’s embassy.

The senior diplomat, Tran Van Thong, was later recalled to Vietnam to help put a stop to the controversy. Vietnam shortly after appointed Thach Du, an ethnic Khmer Krom diplomat, as its ambassador to Phnom Penh, and he served until September 2017.

More recently, at the event marking the 68th anniversary of the June 1949 decision, Prince Sisowath Thomico — the longtime personal secretary to King Father Sihanouk and a prominent royal member of the opposition party — reiterated that the royal family had never given up its claims to sovereignty to the 21 “provinces” of Kampuchea Krom.

With the July 2018 national election in sight, and months before the opposition was banned, he even pledged that future a CNRP government could reclaim the lands.

“Kampuchea Krom is part of Cambodia, and we have the right to demand our own territory without receiving pressure from anyone,” Thomico said at the June 2017 event, held shortly after the CNRP’s strong performance at that month’s commune elections. “We have to organize a plan to campaign to demand Kampuchea Krom back.”

“In 2018, a government led by the CNRP will organize a plan using a diplomatic path to demand Kampuchea Krom come back together with Cambodia,” he said.

In any case, the annual commemoration of France’s decision to cede the lands known in Cambodia as Kampuchea Krom to the Vietnamese state has become an increasingly rare opportunity for opposition figures and the country’s royal family, which is closely guarded by Hun Sen’s government, to come together for a public ceremony.

Yet Princess Pongneary Monipong, who is now 72, has always been more reserved than the opposition in her speeches. Each year, she has made a point of noting the royal family’s sadness about the losses of the country’s historical land but steered clear of making political points.

Astrid Noren-Nilsson, author of the 2016 book Cambodia’s Second Kingdom: Nation, Imagination, and Democracy, said that the princess’s presence at the annual ceremony as a representative of the throne was a throwback to King Father Sihanouk’s time.

“The royal sponsorship of the annual Kampuchea Krom ceremony originated with Sihanouk. That the monarchy still sends its representative today is more than anything Sihanoukist: staying on the path set out by the King-Father,” Noren-Nilsson said.

Then-King Sihanouk hosted the first commemoration of the June 1949 ceding of the land, which took place some eight years after he first acceded to Cambodia’s throne during the dying days of French colonial period, at the royal palace in the year 2000.

Prince Thomico said in a message that King Sihamoni’s decision to continue sending the princess to the event as a representative was a symbolic gesture from the monarch to continue the late king father’s refusal to acknowledge the loss of the land.

“Regarding the presence of Princess Pongneary, it is right to say that the King Father always opposed the French lawmakers giving away Cochinchina to Emperor Bao Dai (because at that time Vietnam did not formally exist),” Prince Thomico said.

“It also shows that the King Father always refused to bear the responsibility of the loss of Kampuchea Krom. By appointing Princess Pongneary, King Sihamoni not only continues the tradition, but also defends the legacy of his father,” he added.

Whatever the impact of the historical losses of land on Cambodians today, though, Rainsy, the opposition leader, said in an email that the CNRP was not interested in any navel-gazing or irredentist claims to the former lands of Kampuchea Krom.

“This is history,” Rainsy said. “We have to look forward.”