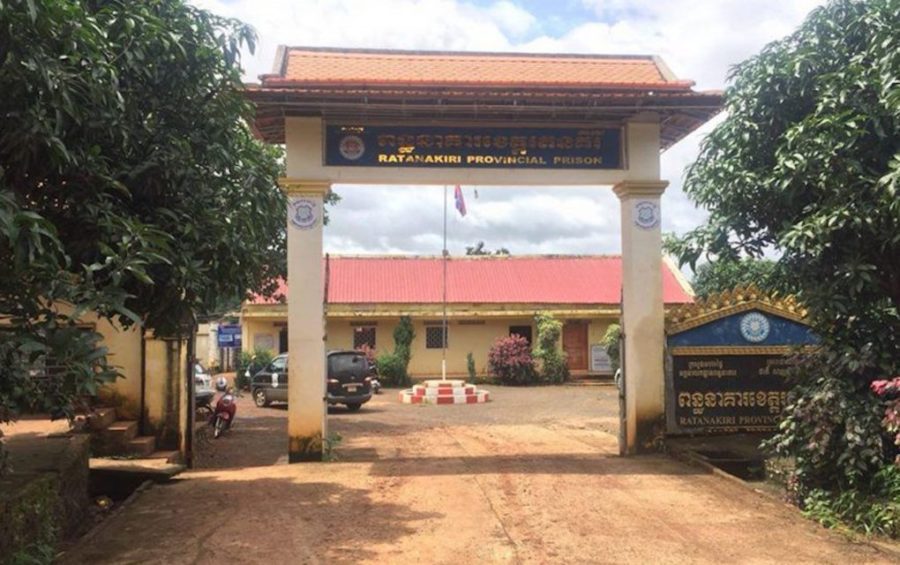 The entrance to the Ratanakiri Provincial Prison, in a photograph posted to the Cambodian Human Rights Committee’s Facebook page in April 2018.

The family of a jailed woman who died while in state custody in Ratanakiri is seeking answers about her cause of death and alleging foul play, while officials say she fell in a prison bathroom and died of a stroke or heart attack.

Bun Yeang, 55, was dead on May 20 by the time she was taken to the provincial referral hospital, the hospital director and the provincial court said.

But Yeang’s family members said they suspect she died in prison and was tortured before her death. They also claim a man who they paid thousands of dollars to secure her release from the provincial prison threatened her life before she died.

While hospital director Ung Ratana said an autopsy showed no bruises on her body, Hul said he saw bruises on his mother’s neck, shoulders and thighs when the family cleaned the woman’s body before her funeral.

His family intended to file a court complaint — if they were provided with pro bono legal services — in order to investigate his mother’s death and find and prosecute a broker they know as That who Hul claims cheated his family of $4,000 by promising to get Yeang out of jail for the fee.

“He took my money and did not give any information to me, and my mother was still in prison,” Hul said. “It seems like he totally cheated me.”

Yeang died nearly three months after she was provisionally detained on February 28 on charges of illegally clearing forest land for personal use in Lumphat district’s Seda commune, according to a letter from the Ratanakiri Provincial Court dated May 22.

Chheng Hour, Yeang’s husband, said she had attempted to exchange a motorbike for five hectares of land with a group of Seda residents. However, environmental officers arrested Yeang, and the family then lost her and possession of both the land and motorbike, Hour said.

On May 20, Yeang, who had diabetes and high blood pressure, slipped and fell in the prison bathroom at about 1 a.m., the court letter said. She was attended to by a prison doctor who found she was stable, the court letter said. But by about 5 a.m. a prisoner in the same cell as Yeang started shouting for help, health officers saw Yeang’s condition was poor and they sent her to the provincial hospital’s emergency room.

An examination of her body showed she died of a stroke, according to the letter.

But Ratana, director of the provincial hospital, said on Monday that he suspected she died of a heart attack.

“It is just a possibility, but she had diseases for a long time,” he said, referring to Yeang’s preexisting conditions.

Two weeks before Yeang’s death, her family first contacted That, the broker who claimed he could get Yeang out of prison and settle her charges at the provincial court, according to her son Hul.

They paid That $4,000, but about a week before Yeang died the broker demanded more than $1,000 extra for “processing,” and threatened the family if they didn’t pay, Hul said.

“A few days more, [and you will] hear the loudspeaker for the funeral ceremony,” says a man in a recorded phone call heard by VOD who Hul said is That.

Then, Hul said his family contacted a lawyer, who Hul identified only as Ny, who charged the family $2,000 to represent Yeang and aid in her release. Ny returned $1,500 after Yeang died, charged them $500 in fees and later contributed about $60 to the woman’s funeral expenses, Hul said.

After the family hired Ny, Hul said That called and criticized the family for refusing to pay the additional $1,000.

In another phone call recorded by Yeang’s family and heard by VOD, the man who Hul said is That says: “I gain no benefit, not even 100 riel. Just the money for my gasoline, you don’t even have … complete nonsense. I don’t demand 2 or 3 million or 4 or 5 million to keep for myself. Just gasoline for my car, and you don’t give it to me. Complete nonsense.”

VOD attempted to contact That and Ny through phone numbers provided by the family, but both men could not be reached this week.

Hul said his family did not have money to pay the legal fees necessary to file a complaint, but he wanted to stop That from tricking other families of prisoners.

His father, Hour, said he wanted to get his money back.

“I have no money and I don’t know who to rely on to file a complaint,” Hour said.

Pradeep Wagle, the U.N. human rights representative in Cambodia, said in an email on Tuesday that his office was aware of the case and inquiring with Cambodian authorities and other relevant stakeholders.

“We are closely following the case and we encourage the Government to conduct full and independent investigations into all deaths in custody, and this case is no exception,” Wagle said.

Lumphat district deputy police chief Nov Saray said police would investigate if a complaint was made.

Nuth Savna, spokesman for the Interior Ministry’s prison department, encouraged the family to file a complaint so the ministry could look into their claims.

“Submit clear information that there was [physical] abuse or extortion,” Savna said last week. “When that happens…[the ministry] will look into the case and decide to assign it for any expert to follow up.”

Din Khanny, an officer for human rights group Adhoc in Ratanakiri province, said the organization would provide legal consultation and a lawyer to the family for free if requested. Khanny said an investigation could offer more information about the alleged land sale, the family’s payments to That and Yeang’s death.

“The information just came from one side,” Khanny said, referring to the court. “No one even saw her last breath, even her children, they did not catch it. We are on the outside, so how can we know if it is true or not?”