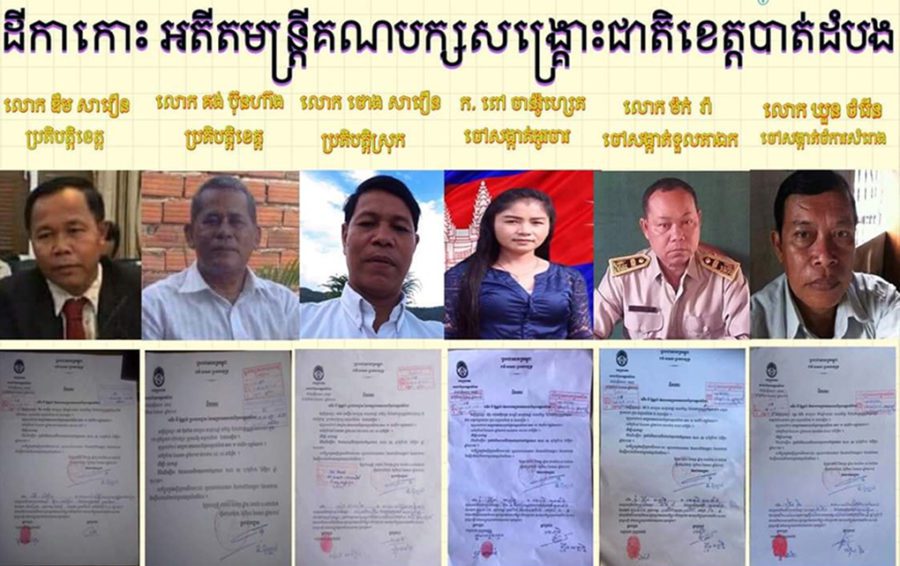 CNRP Officers in Battambong have been summoned for questioning by prosecutors, causing concerns about judicial intimidation. Image: Facebook of Suong Neakpaon

Almost 40 former opposition members were questioned by police in three provinces across the country over the past few days, while the number of officials summoned to court in Battambang rose to 35, according to opposition officials.

Thirty-five former members of the dissolved Cambodia National Rescue Party (CNRP) were called in for police questioning in Kompong Thom province, while two others in Kampot and one in Banteay Meanchey were also questioned by police, party officials said.

Nine more ex-CNRP officers were also summoned by the Battambang Provincial Court for questioning, continuing a series of interrogations that have focused on gatherings at former commune chief Sin Chanpeou Rozeth’s noodle restaurant.

Sun Thun, a former CNRP councilor in Kompong Thom, said his team had been questioned by police on Tuesday and Wednesday. No one was arrested.

“This is a strategy to threaten, intimidate, break up, browbeat and persuade in order to maintain control,” Thun said.

It was an old ploy used by the ruling party to prevent opposition voices from coming together and speaking up, he said.

Meanwhile, in Battambang, seven former CNRP officials were due to appear in court on Thursday, with four others scheduled for questioning on Friday. The interrogations, which began last week, is set to continue through next week.

Lawyer Sam Sokong, representing the ex-CNRP officials at the Battambang court, said the summonses against his clients should be dropped according to their constitutionally guaranteed right to participate in the country’s politics.

“It’s a violation of the right to expression and participation in political life and the right to gather, and, especially, it is a threat,” Sokong said.

Sok Eysan, spokesman for the ruling Cambodian People’s Party, said the actions of the court and police were simply legal actions.

“The Supreme Court already issued a verdict to dissolve the former opposition party,” Eysan said. “So anyone who still continues to comment — or not even comment but engages in activities to support the former party that was already dissolved — you will be called in for questioning by the court.”

Eysan downplayed the mounting numbers of former CNRP members being targeted, saying it merely affected a tiny fraction of the population.

“I think it is not many, because the other 15 million people were not called in for questioning — because they respected the law,” he said.

The Supreme Court dissolved the CNRP in late 2017 claiming it was conspiring with foreign powers to topple the government. The party’s 55 seats in the National Assembly and more than 5,000 commune seats were forfeited to other parties.

Meanwhile, former opposition leader Sam Rainsy — living in exile in Paris — appealed to migrant workers to return to Cambodia to participate in trying to change the government.

“Let’s rebuild Cambodia by first helping the poor and the weak and make it a place where all Cambodians can live in peace, prosperity and dignity, in a society based on freedom and justice,” Rainsy wrote on his Facebook page on Wednesday.