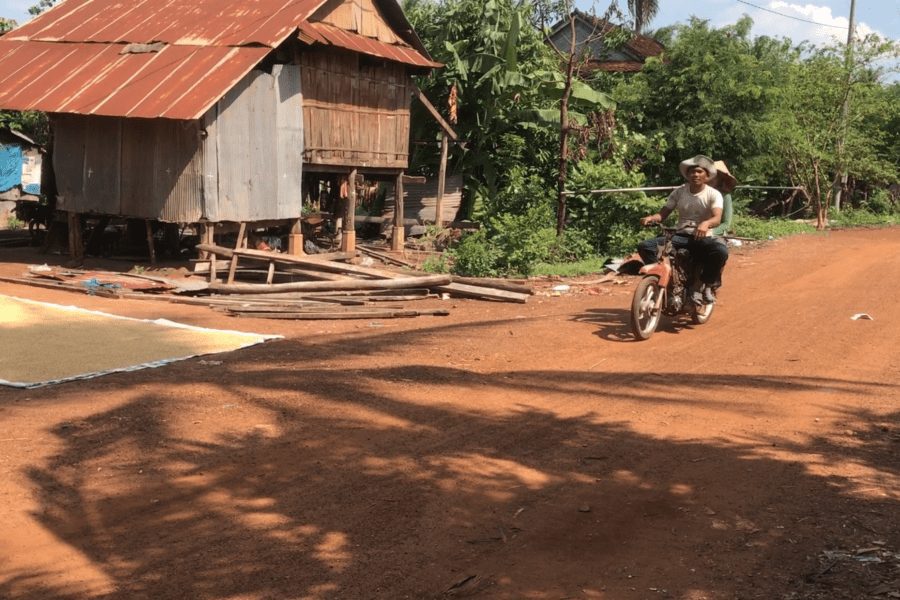 A man and woman drive a motorbike past a stilted house in Tbong Khmum province. (Chorn Chanren/VOD)

Crowds of residents armed with sticks blocked an ambulance from bringing a Covid-19 corpse into two villages in Prey Veng province for burial, forcing authorities to take the local ethnic Cham resident’s body to his family’s hometown in Tbong Khmum province.

The man, Sim Krya, 48, felt sick in mid-July when he went to a local health center for a Covid-19 vaccine, complaining of tremors in his chest, said Neang Sambok, chief of Chak Khlanh village in Peam Ro district’s Peam Ro commune.

He returned without getting vaccinated, but his condition got worse — he felt pain in his sides, and asked for a certificate to say that he was low-income so he could receive treatment at the province.

Krya stayed at the provincial hospital for 10 days, testing negative for Covid-19, but after returning home he got sick again, Sambok said.

“I asked his neighbors, who said he coughed every night and they couldn’t sleep,” he said. After six days, Krya died on July 31, and he was found to have Covid-19. He had lived in Prey Veng with his wife.

The following afternoon, around 2 p.m., local authorities went down to an approved burial site for the Muslim man. Initially, a few old people came to ask about what was happening. Soon word spread, and groups of younger people, including people holding wooden and bamboo sticks, showed up, Sambok said. They blocked the path of an ambulance bringing the body for burial.

“We could no longer stay there. If we continued, we would have been crowded in. They would have surrounded and beat us up,” he said. “They came with bamboo and wooden sticks so they were not coming to negotiate with words. So I and other authorities pulled back.”

By 4 p.m., the officials were routed from Chak Khlanh, he said.

“It is their right, and the authorities just asked them not to use violence … but they did not listen to us,” Sao said.

Peam Ro commune police chief Kong Soy said: “People here reacted to it and we do not want to have to see the dissatisfaction from the people. The authorities and family agreed to send the body to be buried in his homeland.”

U Sok Suloh, a family member of Krya in Tbong Khmum, said the body was brought near where the family lived.

It took days to finally bury him, and it was a difficult time for the family, he said.

“We cannot blame anybody because the country is facing disease so we have to implement the health instructions,” Sok Suloh said.

Normally, the village turns up to an Islamic burial, but only five family members were allowed to witness it, he said.