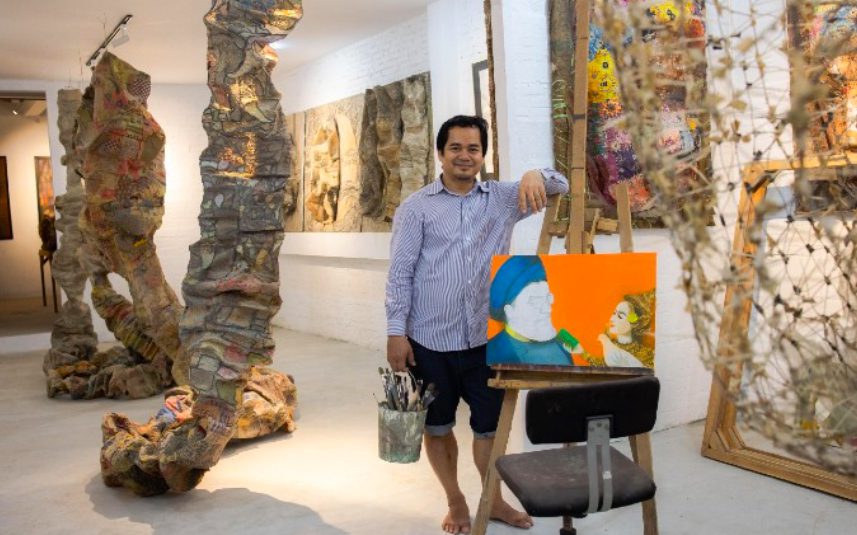 Srey Bandaul, co-founder of Phare Ponleu Selpak, stands among sculptures and paintings in a gallery, in a photo provided by Phare.

One of the founders of world-renowned art school Phare Ponleu Selpak died from Covid-19 on Wednesday evening.

Srey Bandaul, 49, founder of Phare and himself an established painter, died on Wednesday night in Battambang, according to a press release from the school known for teaching Cambodian artists in Battambang province and its popular circus show in Siem Reap city.

Osman Khawaja, executive director of Phare, told VOD on Thursday that he was feeling “total disbelief and shock” at Bandaul’s passing.

“He was the most kindred spirit and the most compassionate person I ever met,” he said. “He passionately believed in arts as a tool to heal. Arts healed him and made him a more peaceful person. He truly embodied the arts.”

Khawaja added that Bandaul had contracted Covid-19 about one week ago, and he had seemed to be recovering before succumbing to the virus on Wednesday night.

His art and profession was profoundly shaped by his experience in a refugee camp after the ousting of the Khmer Rouge regime.

In a 2018 interview, Srey Bandaul told curator and researcher Annie Jael Kwan that he had learned to paint in the Site II refugee camp in Thailand from French NGO worker and artist Veronique Decrop. His art started from imaginative and figure drawing, first exhibiting his work in 1997, and he progressed into contemporary painting. He later channeled his experiences in a refugee camp into a performative video. Phare Ponleu Selpak, which says it teaches more than 1,000 students a year, was founded in 1994, a collaboration from some of his classmates from Site II.

Khawaja remembered Bandaul as a teacher and a key source of support for artists, especially in Battambang, Bandaul’s home province. He spent most of his life developing programs and teaching through Phare’s Visual and Applied Arts School, according to the school’s press release.

Bandaul was the first to take a paycut during the pandemic in order to ensure funding for the NGO and school, Khawaja said, and he led the “Voice” project for the elderly, teaching arts to senior citizens near the school.

“That project was very important and close to his heart to see through to the finish because it was about [elderly people] expressing themselves through art,” he said.

Bandaul, in the 2018 interview, spoke of the power of sharing ideas, recalling discussions he had with other Cambodian and foreign artists that nurturing Cambodia’s contemporary art scene would contribute to education broadly as well as shape Cambodians’ perceptions of the world.

“Because artists, they’re not politicians, they don’t have powerful voices,” he told Jael Kwan in 2018. “But this is the voice they can use to play [to] change a perception of the public.”