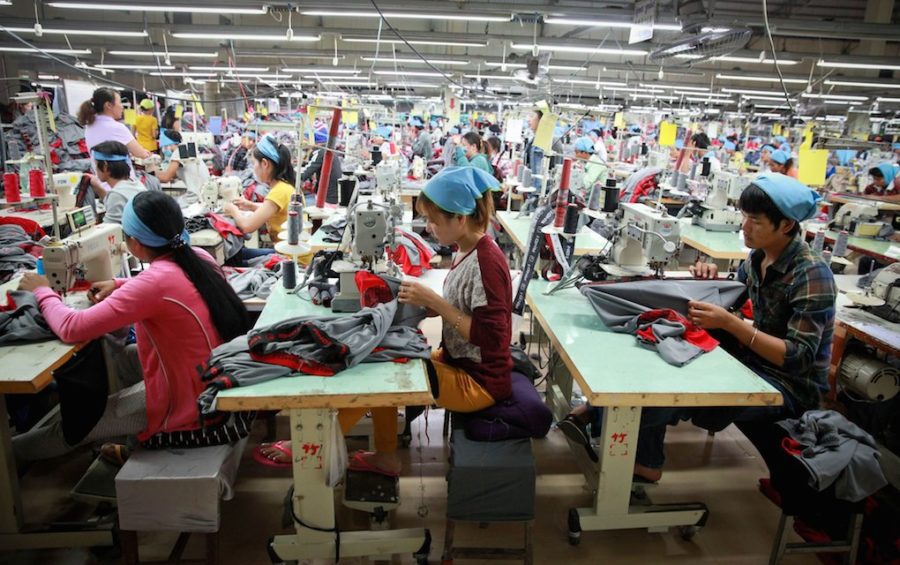 UPDATED June 4, 9:40 a.m. — Local industry groups have asked the E.U. to postpone the partial withdrawal of Cambodia’s tariff-free access to the European bloc for a year to allow the garment sector time to recover from the ongoing pandemic-spurred economic crisis.

The removal of the nation’s “Everything But Arms” (EBA) trade benefits on exports of select garments and other products to Europe, which goes into effect in two months, risks jeopardizing advances in labor rights and working conditions in Cambodia, the groups said in a letter addressed to senior E.U. officials.

The request comes as hundreds of suspended garment workers in Kandal province blocked a road on Tuesday during a protest calling for government-promised payments of $40 each for those who are out of work due to the Covid-19-related economic downturn.

In their letter on Tuesday, the Garment Manufacturers Association in Cambodia, Cambodia Footwear Association and European Chamber of Commerce in Cambodia said the pandemic has had a “devastating impact” on the apparel, footwear and travel goods industry, and 250 factories in the country have had to completely suspend operations as a result.

According to the letter, more than 130,000 workers have lost their jobs as European and North American buyers have canceled current orders or failed to place new ones. The business groups estimate that export sales will fall by about half in the second quarter of 2020 compared to last year.

The groups asked the E.U. to stall its partial repeal of Cambodia’s duty-free and quota-free EBA trade preferences until August 2021, one year after the suspension is set to go into effect.

“We recognize that the Commission decision on EBA withdrawal was made early this year in a different context, with no understanding or expectation of what damage would be done to our sectors, Cambodia and the world by the pandemic,” the industry groups said. “But we find ourselves at a moment when we must point out to the Commission the perhaps unintended consequences of proceeding with the EBA withdrawal in August 2020 at a time when our sectors are reeling from the impact of Covid-19.”

Kinga Malinowska, a European Commission press officer for trade, said on Thursday that the Commission and European External Action Service are continuing to closely monitor the human rights and labor rights situation in Cambodia.

“In case Cambodia shows significant progress, notably on civil and political rights, the Commission may review its decision and reinstate tariff preferences under the EBA arrangement,” Malinowska said in an email, adding that this was in accordance with the E.U.’s EBA withdrawal procedure.

The European Commission said in February that the partial EBA suspension would take effect on August 12 unless the European Parliament and Council object.

In its decision on February 12, the Commission repealed Cambodia’s duty-free trade access to the E.U. for select categories of goods, including all travel goods and sugar, and various types of clothing and footwear. The withdrawal amounts to about 20 percent of Cambodia’s annual exports to the European bloc, worth about 1 billion euros (about $1.1 billion), according to a Commission statement from February.

Commerce Ministry spokesman Pen Sovicheat told VOD on Wednesday that he did not feel the looming EBA withdrawal was having an impact on Cambodia’s export industries now, but it could be a concern in the future.

Sovicheat said he could not confirm by press time whether the Cambodian government was having conversations about the August withdrawal date with the European Commission. But he said he felt optimistic that the government could support the private sector through both the pandemic and withdrawal of EBA.

Despite the coming suspension, he said Cambodia could still export to Europe, but only had a “partial burden of having to pay import tax.”

“We still remain a potential outsource [country]; it only requires a bit more marketing efforts” to be competitive, he said in a message.

Moeun Tola, executive director of labor rights group Central, said he agreed with the industry groups’ decision to ask for a delay of the EBA withdrawal. However, he felt the groups should also appeal to the government to follow the E.U.’s recommendations on human and labor rights, in order to restore duty-free preferences for all Cambodia-made products.

“The required condition is to improve the workers’ rights, human rights, and land rights in line with the democratic line,” Tola said. “If [the government] can find a solution with this, I think that that [the suspension of] 20 percent [of Cambodia’s exports]…could be removed.”

In its published delegated regulation from February, the Commission said it decided to repeal trade preferences after Cambodia had taken a “series of repressive actions” against the main opposition CNRP, which was outlawed by the Supreme Court in 2017, and curtailed “political participation and electoral rights in the country.”

Cindy Cao, an associate researcher at the European Institute for Asian Studies, said the E.U.’s discourse focused on cooperation and solidarity to address the Covid-19 global public health crisis and its socioeconomic impacts. Cao noted that the European bloc had provided more than $60 million to Cambodia to fight Covid-19 and revive the economy.

The E.U. “may postpone the partial suspension of EBA, if addressing the health crisis is the priority and if the E.U.’s actions remain consistent with the discourse,” she said in an email.

“[But] it may not, considering that none of the E.U.’s demands [concerning human rights] have been partially or substantially met,” she added.

In an economic update released Friday, the World Bank said Cambodia’s garment industry was among the sectors most impacted by Covid-19. But last year, before the pandemic, garment exports to the E.U. had already contracted slightly to $2.61 billion, the first time the sector dipped since the global financial crisis in 2008 and 2009.

The World Bank also projected that most factories producing garments, footwear and travel goods will only have limited orders in the second half of the year, since some orders have been frozen or canceled due to shrinking consumer demand.

On Tuesday, more than 700 garment workers at Kandal province’s Uy Factory blocked National Road 5 for more than four hours to demand the $40 that the government promised to those whose jobs were suspended amid the economic downturn.

Oeun Lot, a sewing machine mechanic who worked at the factory for more than 18 years, said workers had only received the $30 promised to be meted out by employers after operations were suspended for two months. However, he said the protesting workers ended the demonstration after representatives from the factory and provincial labor department promised to find a solution.

Another Uy worker, Sok Chenda, said she had been struggling to cover her daily expenses as well as bank loans during the two-month work suspension.

“Workers have met a lot of difficulties,” she told VOD. “We need money to support our children, and we need money to repay loans. The owner keeps lying to us about this and that…. If there is no solution, we will continue to block the road.”

However, Labor Ministry spokesman Heng Sour told VOD that the factory had not properly notified the ministry of its suspension, so the company assumed responsibility for compensating workers.

Cao, the researcher, said that reports of delayed compensation for suspended workers and alleged targeted firings of union workers “sends the message that the situation of labour rights is not improving.”

However, she agreed with the industry groups’ assessment that the partial loss of EBA benefits could diminish labor rights progress in Cambodia.

Referring to the EBA scheme, Cao said, “any measure meant to improve the situation of labour rights should not have any negative consequences such as job losses or an increase of poverty.”

“A policy will be judged by the results, not only the intention,” she said.

Updated at 9:40 a.m. on June 4 with a comment from the European Commission.