‘Blood Slave’ Gets Suspended Sentence While Rescuers Sent to Prison 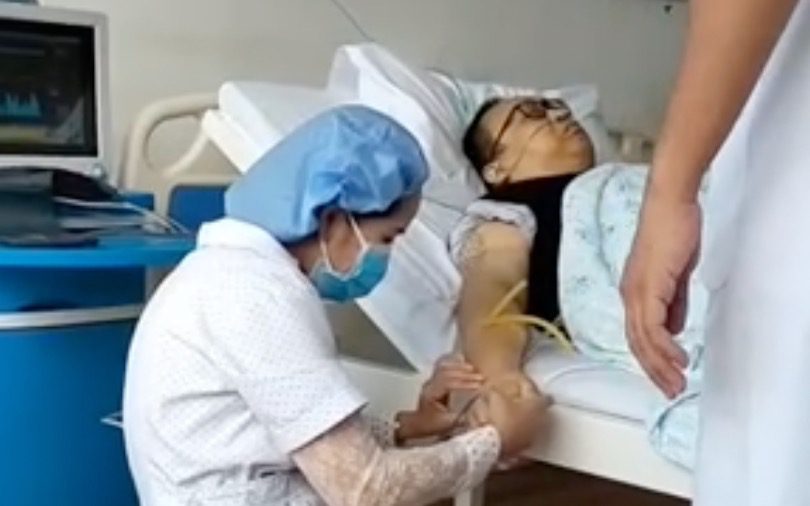 The Chinese national, who allegedly had his blood harvested since last August, receives treatment at a Phnom Penh hospital. (Supplied)

A Chinese “blood slave” convicted of fabricating his tale received a suspended jail sentence of just three months — and has already been sent home — while three accomplices including trafficking rescuer Chen Baorong were sentenced to two years in jail.

In February, Li Ya Yuan Lun, 31, told media that he had been trapped in a Sihanoukville scam compound, and when he refused to undertake illegal work his supervisors harvested his blood for sale. But authorities rejected the tale and arrested Li, Chen and two others for false declaration and incitement.

Chen’s wife told VOD on Tuesday that her husband was sentenced to two years in prison, but the court had yet to confirm the verdicts.

Li was deported in June, according to the immigration department.

The three others in the case, including Chen’s assistant and a Sihanoukville doctor, were sentenced to two years, the court spokesman said.

On Tuesday, Chen’s wife, Neang Srey Leak, 38, told VOD that she felt “lost and confused” by the ruling.

“I’m speechless and I can’t remember anything at all — I don’t know what to do and I’m lost and confused,” she said yesterday. “I feel very saddened … the court decision is beyond our expectation.”Authorities have conducted a series of raids to remove foreign workers from scam compounds amid rising international pressure — saying nearly 1,000 have been freed so far this year — though they continue to dismiss or downplay claims of detention and torture.