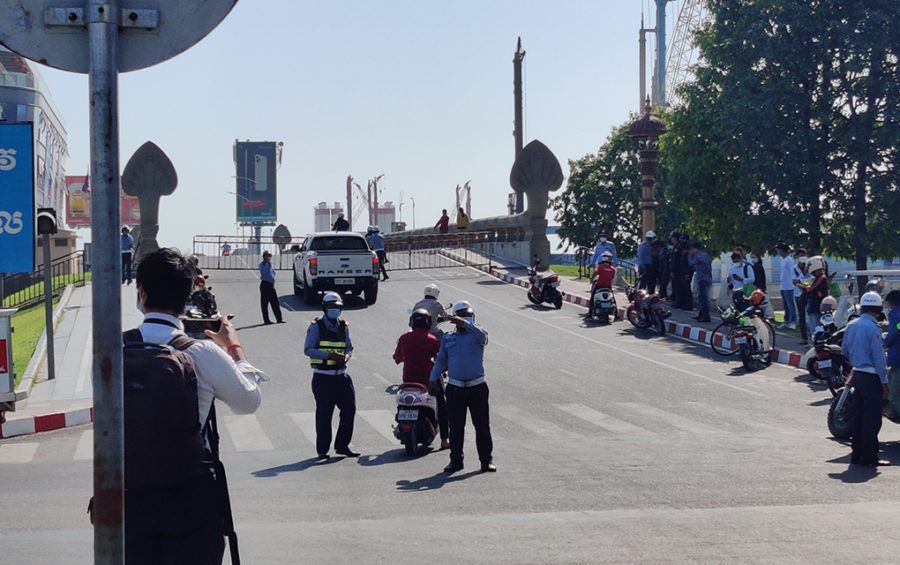 UPDATED 7:35 p.m. — Cambodia reported 32 new cases of Covid-19 on Saturday morning, part of a new community cluster linked to a Phnom Penh nightclub and four women, two of whom were found to be positive, and who were allowed by hotel security to leave quarantine.

Prime Minister Hun Sen said 32 positive cases had been found within 10 hours, with the first identified case linked to the “N8 Club” in Phnom Penh.

“This is a bad situation for us while we are fighting against Covid-19,” Hun Sen said in a live-streamed speech.

He said all nightclubs, and two apartment buildings suspected to be linked to the “February 20th” cluster would be closed off, with residents of suspected exposure areas allowed to enter but not exit.

Authorities on Saturday morning blocked all three entry bridges to the capital’s Koh Pich island, as well as the roads surrounding some Tonle Basac commune high-rises, according to an eyewitness who shared photos on Twitter.

Hun Sen said he expected a large number of tests and more positive cases. He advised Phnom Penh residents to take Covid-19 health precautions seriously, including staying home if possible, wearing masks and social distancing, although he said he had no intention of closing schools or banning wedding parties or other public gatherings yet.

The four women linked to the outbreak are Chinese nationals who were quarantined at the Sokha Hotel, Hun Sen said, adding that they had left the hotel and then returned.

The premier said most of the new positive cases were Chinese people and asked for no discrimination against foreigners.

The latest community-level outbreak was identified after people came for Covid-19 tests in order to travel overseas, Hun Sen said. On Friday night, officials found 28 positive cases, and another four cases on Saturday, he added.

The new cluster comes this week as the government on Thursday raised fines for people escaping quarantine from $250 to $1,250, following a number of cases of quarantined individuals leaving designated facilities without authorization since last year.

Hun Sen also said Cambodians would not be allowed to travel to Thailand, Vietnam and Laos, but could return to Cambodia. Dozens of positive cases in recent months have been among Cambodian migrant workers returning home from Thailand, which saw new outbreaks earlier this year.

In an email sent to American citizens, the U.S. Embassy advised people to avoid barricaded areas, which it said included Koh Pich and also reportedly St. 51 and St. 172.

“American citizens are reminded to adhere to local government COVID screening requirements and abide by locally implemented social distancing and other health and safety precautionary measures,” the message said.

The government on Saturday called on owners of hotels, restaurants, condominiums, factories, offices and other venues that host large crowds to use a new website and QR code system, stopcovid.gov.kh, to help aid in Covid-19 contact tracing.

Business owners can request a QR code from the website at no cost, to be printed and placed at the business entrance, according to a statement from the Health Ministry.

Those entering and exiting the place of business can scan the QR code with their mobile phone, it says.

“This system will record the location of the person logged in (a system that does not track private information) and make it easier to track down those involved or affected if the location is found with positive cases of Covid-19,” the statement says.

Cambodia has reported 516 positive Covid-19 cases since last January, with at least 470 recoveries and no deaths. Since February 10, 4,609 people in Cambodia have received the Sinopharm Covid-19 vaccine, the Health Ministry said.

Updated at 7:35 p.m. with information about the QR code tracking system.