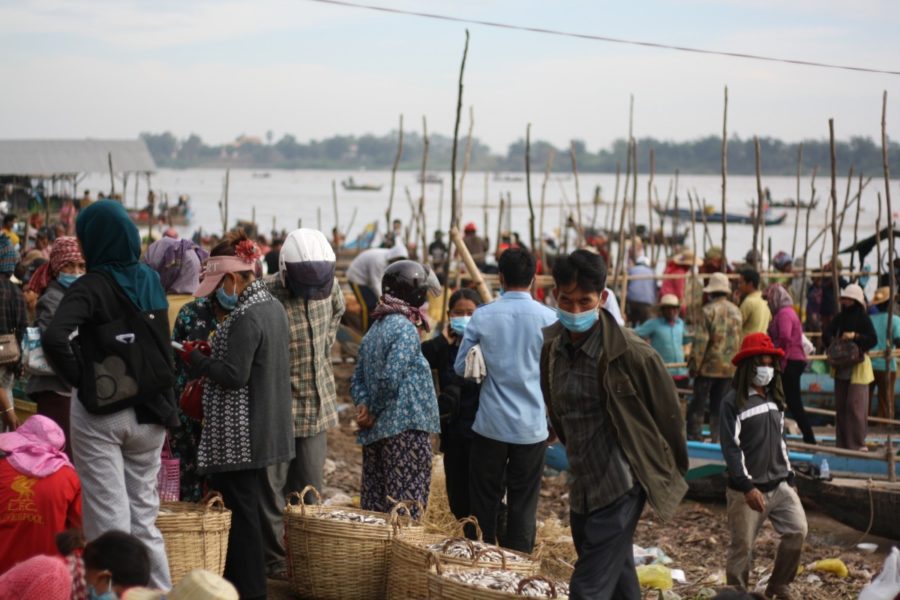 People gather on the shore of the Tonle Sap river in Kandal province’s Ponhea Leu district for prahok season on December 23, 2020. (Michael Dickison/VOD)

For less than two weeks, hundreds of people will cram into markets now sprouting on the banks of the Tonle Sap, chopping and raking fish heads, heaving and weighing large baskets of small fish, and haggling over prices every step of the way.

On Wednesday, prahok buyers, sellers and workers in Kandal province’s Ponhea Leu district crowded onto a small slice of shore for the annual trade in prahok, with masses of fish caught in nets as they exit the Tonle Sap lake downstream and are turned into Cambodia’s iconic smelly fish paste.

Mo Han, 53, was there with three grandchildren, chopping the heads off fish for payment in rice. On a good day, she could get 100 cups, she said.

Buyers came from all over Cambodia, and they would buy a bag of fish, ask her to decapitate them, then take them to be descaled and mashed before putting them in salt, she said.

Khim, 40, another fish-head chopper, said she did the work from 6 a.m. to 6 p.m. during prahok season. There also used to be work stomping on the fish before they were salted, but that had been mechanized in recent years, she said.

Just offshore, wooden platforms in the water have been equipped with motorboat propellers, churning vats full of beheaded fish.

For broker Toeun Sreymom, time was always ticking. She would buy 50 kg baskets of prahok from unloading boatmen at around 5,000 riel a kg, and try to sell them on shore for about 5,500 riel.

But the fish piled in the baskets were only good for two hours, Sreymom said. As minutes passed she lowered her prices, until finally she was trying to sell off her stock at 5,000 riel with no profit.

Kandal provincial fisheries administration director Heng Sophearith said by phone that the fish catch was low this year. Amid historically low water levels, fishers were getting 30 percent fewer fish than a typical year, he said.

Oun Roeun, a 70-year-old who had traveled from Kampong Speu province’s Odong district, said she had come on a truck with about 20 people and stayed overnight, sleeping on a mat on the ground.

She was making prahok herself on the spot with about 40 kg of fish, so her family of six could eat it for six months, Roeun said.

“Buying it isn’t delicious. Making it ourselves is delicious,” she said. “I’ve done it since I was born.”