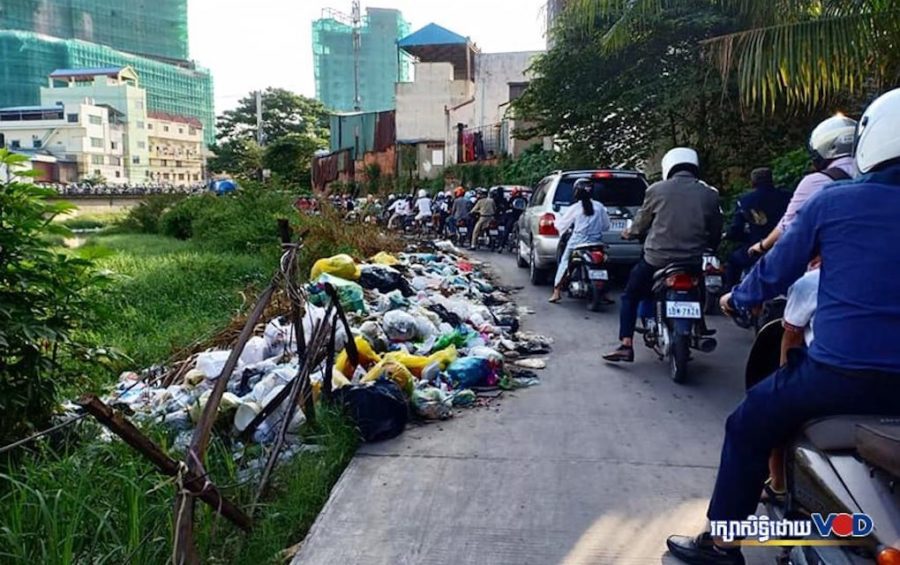 About 10,000 tons of trash is produced every day from houses and factories around Cambodia, 90 percent of it going unrecycled, said presenters at a Waste Summit on Thursday in Phnom Penh.

Attendees of the event also heard that there was interest from Chinese, European and Japanese companies to set up recycling businesses in the country, but high electricity prices and lack of subsidies had so far prevented the proposals from being profitable.

Phnom Penh alone produced 2,000 to 3,000 tons of trash a day, including 600 tons of plastic waste, according to a statement from German foundation Konrad-Adenauer-Stiftung, which organized the summit.

The growing amount of waste was a result of rapidly expanding cities, industrial development and increasing consumption, it said.

Apart from municipal solid waste, the capital’s trash included waste from construction, industry and other sectors, the statement said.

Daniel Schmucking, country director for Konrad-Adenauer Stiftung, said waste was a growing concern for the country and required cooperation among stakeholders to address.

“There is a need to have participation from all parties — especially political decision-making from the government — to solve the issue of waste,” Schmucking said.

Tom Hesketh, business services manager for the European Chamber of Commerce in Cambodia, said during a panel discussion that waste recycling was a potential business opportunity.

“But in order to make profit from this work, there needs to be additional new technology. Cambodia also needs to have policies to encourage investors in this sector,” Hesketh said.

Noun Samnavuth, chief of Phnom Penh’s waste management office, told reporters at the event that more than 50 companies from China, Europe, Japan and other countries had sought cooperation to find opportunities in waste recycling, but none had committed after being unable to produce a profitable business plan.

“They meet with us and show us the technical aspects and ask for permission to study [the project further], but after studying it, they find that it cannot make a profit because the price of electricity is expensive,” he said.

The manager of Phnom Penh’s municipal dumpsite, located in Dangkao district, estimated last month that the site would be filled up by 2030. Some medical and industrial wastes are taken to another site in Kampong Speu province.