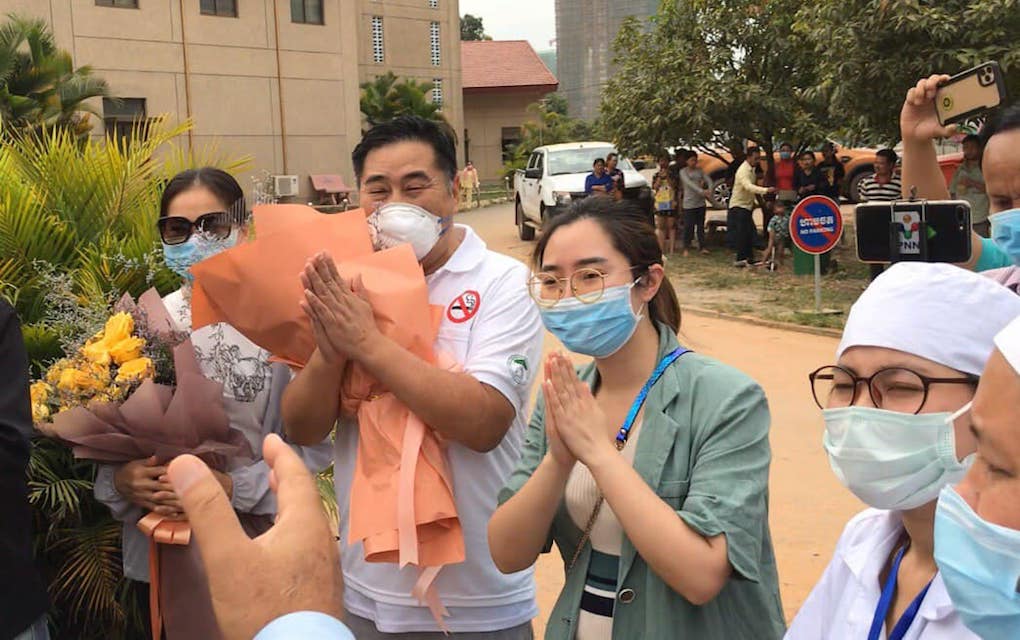 Chinese man Jia Jianhua, who had tested positive for novel coronavirus in January, gestures after being discharged from quarantine at Preah Sihanouk provincial hospital, in this photograph posted to the Health Ministry’s Communicable Disease Control Department’s Facebook page on February 10, 2020.

Cambodia’s only patient confirmed to have contracted the novel coronavirus was allowed to leave hospital quarantine on Monday morning after he tested negative for the new viral strain, the Health Ministry said.

Chinese man Jia Jianhua, 60, had tested positive for the respiratory virus two weeks ago, after having traveled to Preah Sihanouk province with three family members from China’s Wuhan, where the virus was first detected in late December.

More than 40,000 cases of the virus have been confirmed in more than 20 countries, with 99 percent documented in mainland China, according to data from the U.S., E.U., China and World Health Organization (WHO) compiled by Johns Hopkins University, as of Monday evening.

Some 910 people have died, including 871 in Hubei province, where Wuhan is located. More than 3,400 people have recovered from the virus, the data from Johns Hopkins says.

Jia and his family members, who had tested negative earlier, were no longer subject to health monitoring, the statement said.

Ministry spokesman Ly Sovann told VOD that Jia had fully recovered and was allowed to meet his family.

“Recovering in medical terms means that he has no symptoms present anymore. Secondly, he has no virus in his body, and thirdly, he is not contagious,” Sovann said.

Jia and his family would depart from Cambodia on Tuesday, ministry spokeswoman Or Vandine said.

They were free to travel wherever they’d like after being discharged, she added, but did not answer questions about whether they would return to China.

In a video posted to the ministry’s Communicable Disease Control (CDC) Department’s Facebook page on Monday, Health Minister Mam Bunheng is seen greeting Jia, who is wearing a facial mask, but the minister appears to keep his distance. Bunheng and Environment Minister Say Sam Al, and some others, are seen without masks, while others nearby have their mouths and noses covered.