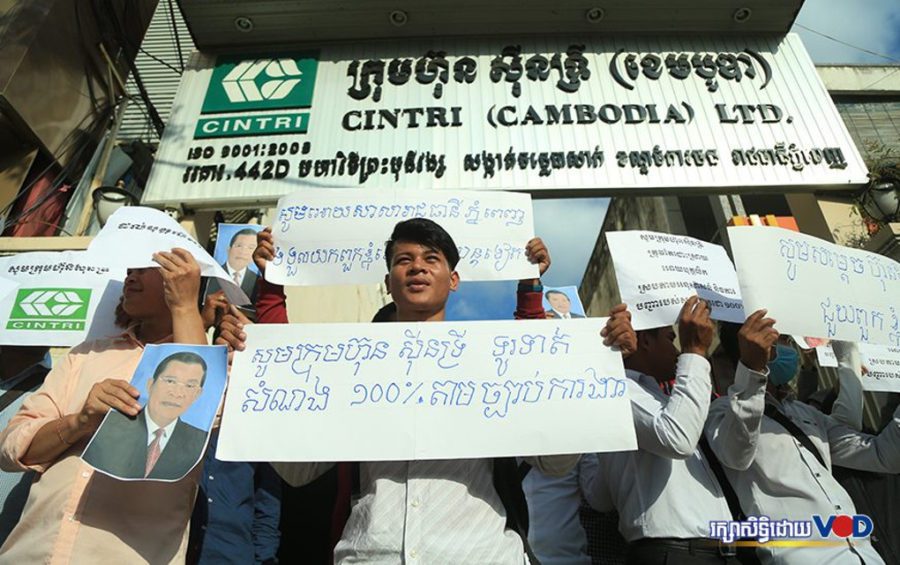 More than 80 office staff from waste collector Cintri protested in front of their company along Monivong Boulevard in Phnom Penh on Thursday after it laid them off without notice, clear reason or adequate compensation, they said.

Song Soly, a staff member previously employed at the customer service office, told VOD that the company had held a meeting on Monday to inform its staff to stop working that day, promising to give only 50 percent of their severance pay. The staff, he said, protested on Thursday to ask for 100 percent of the severance pay due upon termination.

Song Soly said the layoffs affected their livelihoods as it was difficult to find a new job.

“It affects our families’ livelihoods, which need a daily income,” he said. “With these immediate layoffs, we don’t know how to find jobs.”

Phon Rathpiseth, another office worker, said the move went against Prime Minister Hun Sen’s speech in October, who had said that all staff would be kept even when Cintri lost its license.

In order to reform the failing waste sector, Hun Sen had announced the revocation of Cintri’s license, putting the operations under temporary state control.

“We all want Samdech Hun Sen to find justice for us, help us to find jobs because we are all in need,” Rathpiseth said, adding that the workers had been told that they would be given a solution on January 15. Until then, he said, they would hold off on further protests.

Cintri representatives could not be reached.

Cintri has been the sole license holder for waste collection in Phnom Penh since 1996. At the time, an estimated 500 tons of trash were produced every day in the capital, while it had now reached about 3,000 tons daily, Hun Sen said.

Labor Ministry spokesman Heng Sour said his ministry would find a solution for the workers, but that it was a complicated matter. “This case is not a mathematical calculation of 1 plus 1 equals 2 immediately,” he said. “However, the ministry will side with the workers who are protesting and will find a solution.”