CNRP Mass Trial Defendant Asked: ‘Who Is the Dictator?’ 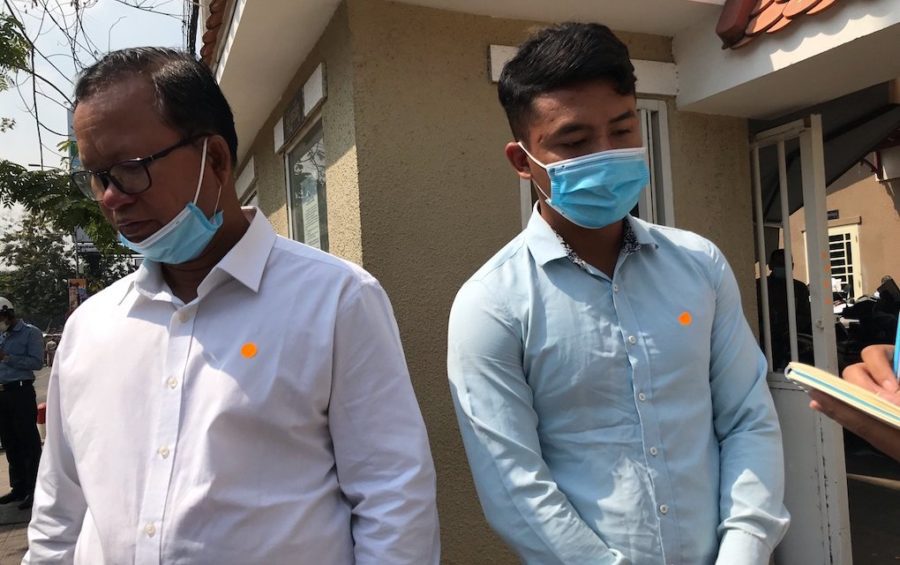 Chea Yamorn (left) and Prum Rath, defendants in a mass trial against 60 CNRP politicians and supporters, speak with reporters outside the Phnom Penh Muncipal Court after a hearing on January 28, 2021. (Ouch Sony/VOD)

Phnom Penh Municipal Court judges on Thursday grilled opposition defendants in ongoing mass trials over the meaning of their social media posts, including how they defined the words “liberate,” “dictator,” “struggle” and “democracy.”

During the more than three-hour trial hearing, the court continued questioning members of the outlawed CNRP, who are charged with incitement and plotting, about the intentions behind their online posts.

Heng Chan Sothy, whose questioning began on January 14, was asked by Judge Ros Piseth on Thursday about his phrase “liberate the country from the dictator.”

“You wrote about liberating our country from a dictator. What action or meaning did you intend?” the judge said.

“I wrote to mean bringing about change through free and fair elections and following the law,” Chan Sothy answered.

“Do you understand what impact that word has? Who is the dictator?” Piseth asked.

“Any individual who goes against democracy and against the free and fair election process,” Chan Sothy replied.

But the answer was not enough for Piseth, who repeatedly pressed Chan Sothy, asking whether the former CNRP official was referring to any specific person or entity. Chan Sothy would only say he didn’t understand the questioning and declined to answer.

Chea Yamorn, a former Phnom Penh opposition commune councilor, was the next defendant to be questioned, but declined to give any answers.

Amid the questioning, his lawyer Sam Sokong objected that he had not seen some of the evidence being raised.

“I haven’t seen the document relating to the facts you are asking about,” Sokong said.

Judge Piseth berated Sokong for not requesting all the documents referred to in the investigating judge’s closing order, saying the evidence was from a report produced by counterterrorism police. Cambodia’s counterterrorism police has been supported by Australia, Japan, and the U.N. Office on Drugs and Crime alongside the U.S. and E.U.

“You have to ask for any documents you are missing,” Piseth said.

The hearing was part of a series of trials against more than 150 defendants affiliated with the banned CNRP, the country’s main opposition party which was dissolved by the Supreme Court in 2017 following a disputed treason charge against party president Kem Sokha.

The case heard on Thursday relates to exiled party co-founder Sam Rainsy’s failed attempt to return to the country in 2019, with much of the questioning so far focused on organizing support for the homecoming. As Rainsy promoted his planned return online, he asked soldiers to turn their guns against Prime Minister Hun Sen.

Prum Rath, deputy president of the CNRP’s youth group in South Korea, was also evasive under questioning about his words “struggle,” “sacrifice” and “democracy.”

Democracy meant that power is in the hands of the people and they can monitor the activities of their leaders and participate in decision-making, Rath said.

“Where are these people who cannot participate?” the judge asked, and later: “In what way is our country bad?”

Rath asked not to answer the latter question.

The next hearing for the case is scheduled for February 18.