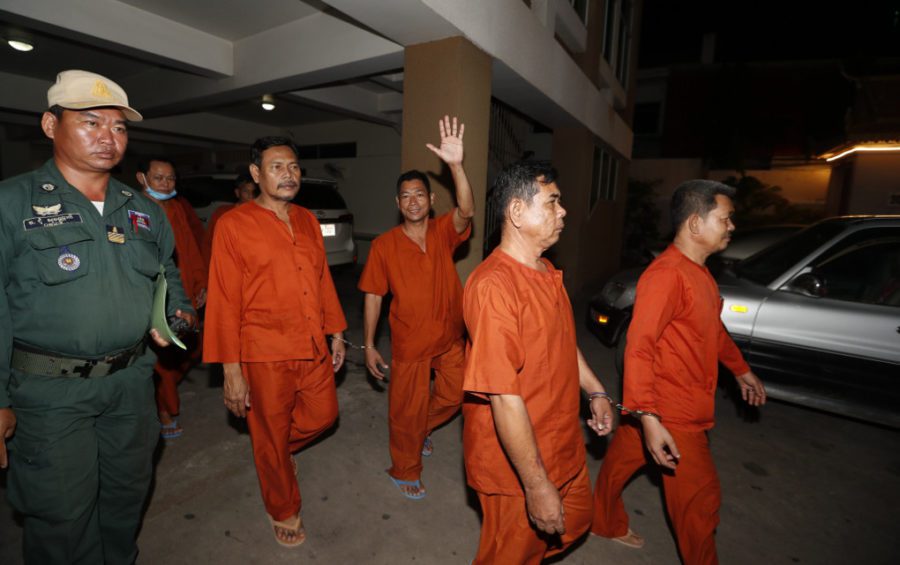 Ten more were set to be released on Thursday evening, according to a court official, following an order from Prime Minister Hun Sen for judicial authorities to set free those who were “tricked” by leaders of the outlawed opposition.

Speaking during an inauguration ceremony for a cement factory in Kampot province, Hun Sen said that more than 70 people could be released on bail after their cases were reviewed by courts. He also ordered the justice minister to work with court prosecutors to cancel arrest warrants for others who had fled the country to avoid arrest.

Officials “should consider the possibility of releasing on bail those who were arrested after being tricked,” Hun Sen said.

The prime minister said that he “ordered all subnational-level administrations not to arrest those who have escaped and keep hiding in Thailand.”

“I would like to appeal to brothers and sisters who were cheated and escaped to Thailand. Please return back home to Cambodia. The government will not punish those who were tricked. Hun Sen will not let them be arrested,” he added.

Two CNRP supporters in Kampot and one in Kratie, who were charged with plotting in connection to Rainsy’s plan to return to the country on November 9, were released from detention, according to their lawyer Sam Sokong.

Rainsy had vowed in August to re-enter Cambodia last Saturday with thousands of supporters in an effort to push Hun Sen from power. However, he did not make it home as planned.

The CNRP co-founder has lived abroad since late 2015 to avoid a slew of criminal convictions that he calls political. Rainsy was unable to fly to Bangkok from Paris last week, instead arriving in Kuala Lumpur on November 9, in an effort to get as close to Cambodia as possible.

On Thursday morning, he landed in Jakarta and was to meet Indonesian parliamentarians, CNRP vice president Mu Sochua said on Twitter.

The Cambodian Embassy in Jakarta said in a statement that Cambodia had requested all Asean nations, including Indonesia, to “arrest and deport” seven senior CNRP leaders, including Rainsy and Sochua, for “trying to topple” the Cambodian government and flee the country.

The embassy claimed Rainsy would violate his tourist visa by engaging in political activities in Indonesia.

On Friday, the embassy said it was withdrawing its Thursday statement regarding Rainsy’s Indonesia visit due to “some latest developments,” without specifying the reason.

“It would be highly appreciated if you do not use the contents” of the previous press release, the embassy added.

Cambodian authorities had branded Rainsy’s plan to cross the border from Thailand into Cambodia with thousands of supporters in tow an illegal coup attempt. Officials said Rainsy would have to face the court if he returned to Cambodia.

Hun Sen’s release order came two days after the E.U. delivered its preliminary report to the Cambodian government on the country’s access to a preferential trade agreement that allows duty-free and quota-free access to the bloc’s market for all goods except arms and ammunition.

While the report was not released publicly, RFA reported on Thursday that the E.U. had “warned Cambodia that it has not taken enough steps to prevent a loss of its special trade privileges, noting particularly ‘further deterioration’ of its human rights record since a review process was launched” in February, citing the confidential 70-page report that was shared with RFA by “official sources” on condition of anonymity.

Cambodia has one month to respond to the E.U.’s findings. A final decision is due in February.

Phnom Penh Municipal Court spokesman Y Rin told VOD that a judge decided to release on bail 10 people who had been detained in Phnom Penh’s Prey Sar prison and were charged for participating in a plot with the CNRP.

Hun Sen suggested that he would not request a royal pardon for Rainsy, as had occurred in the past. Instead, Rainsy’s legal fate would be left to the courts, he said.

“Your sentence will not be forgiven. You have to go through a legal process, and the only person who has the right to propose to the king for a pardon is Hun Sen’s right hand, but Hun Sen will not sign a pardon for the same person. I do not mention the name, but this is a specific political message,” the prime minister said.

The Justice Ministry said in a statement on Thursday that it encouraged law enforcement and judicial authorities to continue pushing for the use of an “exemption from penalty” article in the Criminal Code, which allows those accused of plotting to be exempt if “before being prosecuted, he or she has informed the competent authorities of the existence of the plotting and the identification of other participants.”

The ministry also asked courts to consider stopping arrests, and reducing the use of pretrial detention, in cases connected to Rainsy’s “coup” attempt.

According to Human Rights Watch, authorities have charged more than 100 CNRP members, and detained 57 of them since mid-August.

Phil Robertson, Human Rights Watch’s deputy Asia director, said on Twitter that granting bail was not enough for the “more than 100 political prisoners” in Cambodia.

Updated on November 15, 2019 at 9:40 a.m. with the Cambodian Embassy in Jakarta’s comments on Friday withdrawing its earlier statement.