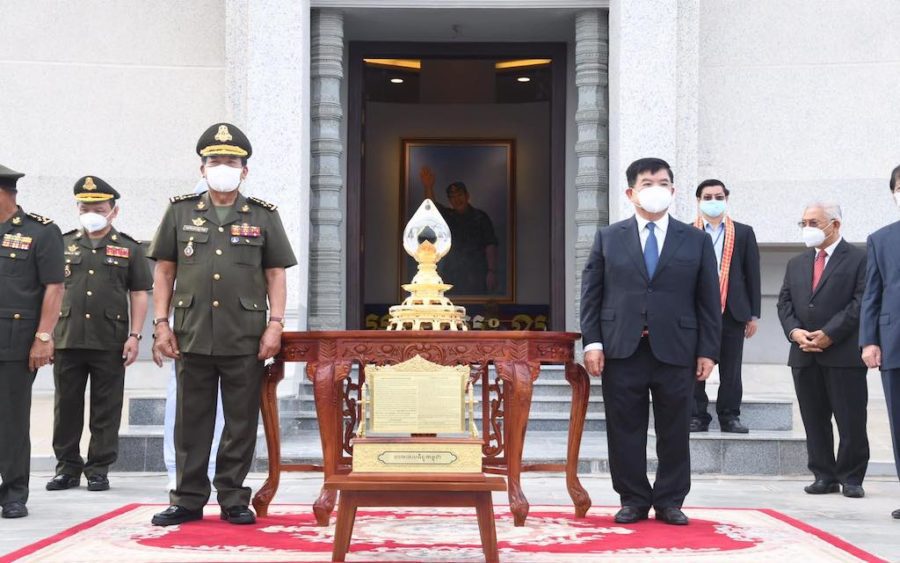 In a long-planned ceremony, Defense Minister Tea Banh presented Cambodia’s first drop of oil, extracted from deep under the sea at the country’s offshore Apsara oil field, less than a week after the company behind the project announced liquidation amid financial woes.

KrisEnergy announced to its shareholders on Friday that it was “unable to pay its debts” and “will proceed to liquidation.”

The Apsara block was previously beset by years of delays, but late last year KrisEnergy finally produced the country’s first drop of oil in an achievement lauded by Prime Minister Hun Sen. The premier immediately asked Banh to bring the drop of oil to Phnom Penh to memorialize.

Six months later, a ceremony was held on Wednesday at the Win-Win Memorial on the city’s outskirts, a monument inaugurated in 2018 to mark a deal Hun Sen struck in 1998 with remnants of the Khmer Rouge to end decades of civil war.

“My duty is to consider it as the most important history, and that is the first drop of oil that we have gotten,” Banh said at a press conference at the ceremony. “Other information, I will not explain. But I just believe that sometimes things do not go as smoothly as traveling on a paved road. There may be bumpiness with this and that. There will be solutions based on practical steps in the coming day.”

KrisEnergy had closed down its projects in other countries to focus on producing oil in Cambodia, but it has disclosed that production at the Apsara block was below expectations.

Energy Ministry secretary of state Meng Saktheara posted on Facebook that negotiations and court proceedings were ongoing, but KrisEnergy’s creditors had the right to continue operations at the Apsara with the Cambodian government. KrisEnergy’s Cambodian subsidiary would face challenges without financial support from its parent company, he added.

Major oil operations and planned follow-up development projects would be temporarily on hold pending a new agreement between the government and creditors, Saktheara wrote.

Chan Ramy, director of the Youth Resource Development Program, said the oil project stretched back to 2004, and its latest troubles were a blow.