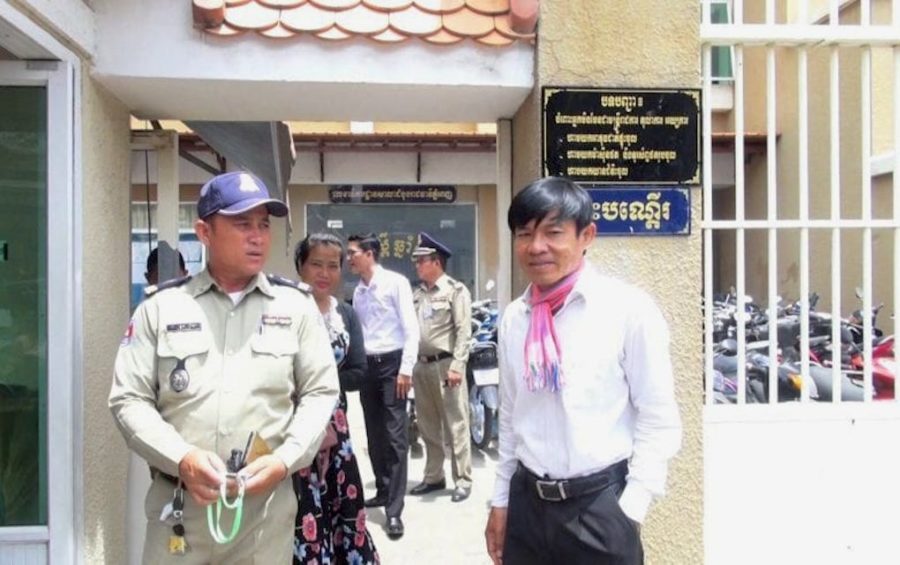 The final court hearing into an “espionage” case against two journalists failed to clear up whether the pair are facing up to 15 years in prison for providing news reports to U.S.-run Radio Free Asia or if they are accused of something more.

Charged with supplying a foreign state with information prejudicial to national defense, Oun Chhin and Yeang Sothearin have testified at the Phnom Penh Municipal Court that they supplied RFA with four news reports in the week after it closed its Phnom Penh office in September 2017 over a tax dispute and political pressure.

The reports were about an Information Ministry press conference, a public protest in Phnom Penh and a Facebook post by former opposition leader Sam Rainsy, the two said in court, questioning how such public information could prejudice Cambodia’s national defense.

Men Hengtith, chief of Phnom Penh police’s internal security bureau, and Sam Vanvirak, director of the Interior Ministry’s internal security department, gave evidence in court that former RFA staff had set up a studio at a Phnom Penh guesthouse that could have been used for news production, according to local journalists.

At the final hearing on Friday, deputy prosecutor Seng Heang asked the court to find Chhin and Sothearin guilty because they had “bad intentions.”

The studio in the Marady Hotel was on an upper floor, making it easy to transmit information to foreign countries, Heang claimed in his closing statement. It had been run illegally for three months before Chhin and Sothearin’s arrest there in November 2017, he said.

Heang added that there was documentary evidence that they had not stopped working as RFA reporters after the newsroom’s closure. He did not, however, explain how the accusations might amount to espionage.

Chhin was also accused of delivering a “disk” to the U.S. Embassy around that time, though it was unclear what it was supposed to have contained.

RFA spokesman Eduardo Jaramillo told VOD on Friday that the disk in question contained an archive of 20 years of RFA’s journalism as well as personnel records.

“RFA was closing a news bureau in Phnom Penh that had operated for nearly 20 years,” Jaramillo said. “We wanted our journalistic archive and basic personnel records to be protected from seizure by Cambodian authorities.”

Jaramillo recalled “a climate of intense intimidation” around September 2017, when “the government was spinning wild conspiracies about RFA that left former staff members at risk of arrest.”

In diatribes and flow charts delivered via government-aligned Fresh News, RFA and several civil society organizations were accused of being part of a color revolutionary plot to overthrow the government.

After RFA’s closure, Information Ministry spokesman Ouk Kimseng held a press conference threatening former reporters with arrest if they continued to work for the U.S. news service, suggesting they could be held liable under the government’s frequently-deployed, catch-all crime of incitement.

“If the person is found guilty, they will be punished for several months,” Interior Ministry spokesman Khieu Sopheak said at the time.

Chhin and Sothearin were jailed for nine months before being released on bail in August last year.

On Friday, Jaramillo said RFA had merely approached the U.S. Embassy to help transport its records out of the country.

“It was important to secure this information,” he said. “To imply a sinister intent is just plain wrong.”

He added that according to RFA records Chhin and Sothearin had submitted just one story after the newsroom closure, and could not explain the discrepancy with the pair’s court testimony.

Contracts with RFA’s local staff had been valid until the end of September even after its offices were closed, he said.

A previous statement made by RFA spokesman Rohit Mahajan to the Phnom Penh Post and Voice of America in November 2017 said that Chhin and Sothearin had “no contractual nor any other relationship with RFA to provide news or other services” once it shuttered its local offices two months prior.

In a statement posted to its website last week, RFA said the closure of the offices had been “sudden and panicked.”

“Without any due process, the government was declaring journalism by RFA in Cambodia to be illegal,” the statement said. “In the midst of this, RFA had to maintain its daily news report that continued to be broadcast from our headquarters in Washington, D.C.”

The statement also called the prosecution against Chhin and Sothearin “unjust,” saying it was targeting “two of Cambodia’s most dedicated, independent journalists for simply doing their job to provide reliable information to the Cambodian public.”

“We maintain that in a democratic society, reporting the news should not be a crime,” the statement said.

Presiding Judge Im Vannak announced on Friday that the verdict into the case would be delivered on August 30.

If the court failed to come to a verdict based on legal principles on August 30, the Cambodian public would have no reason to believe in the court’s independence, Senkaruna said.

“We are losing the confidence of our people, the public and international opinion,” he said. “If we continue to do what’s not right, then we can see it’s getting worse and worse. The confidence of the people is almost gone.”

Updated at 12:06 p.m. with background on previous RFA statements.