EU Lawmaker Offers to Accompany Rainsy Back to Cambodia 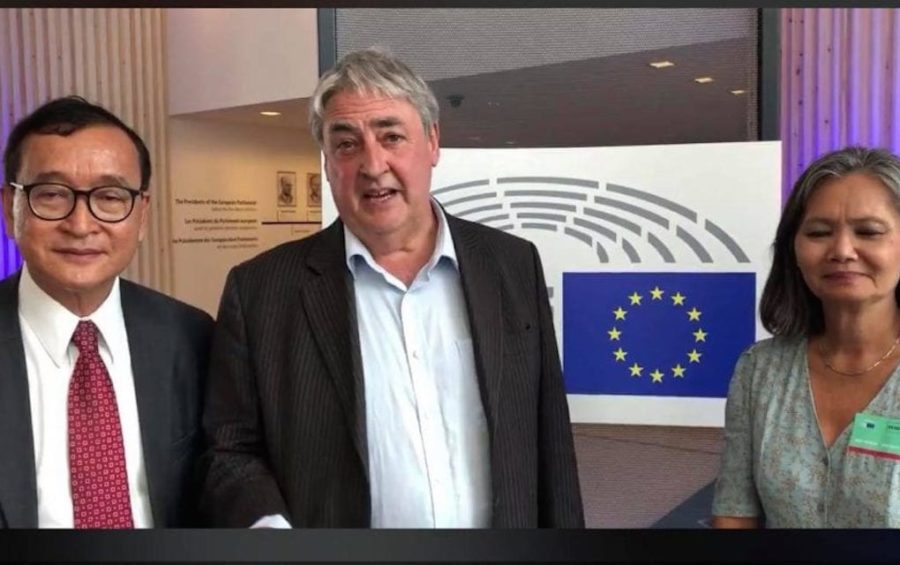 An E.U. parliamentarian has said he would accompany exiled former opposition leader Sam Rainsy back to Cambodia in order to help restore democracy in the country.

Phil Bennion, a U.K. politician elected to the E.U. Parliament, met with Rainsy and other leaders of the dissolved Cambodia National Rescue Party (CNRP) in Brussels.

On Thursday, he posted a video on Twitter saying that the E.U. would take action against Cambodia if it continued to disrespect its obligations to uphold democracy under the Everything But Arms (EBA) trade scheme.

Bennion also appealed to Cambodians outside the country to return to help rebuild democracy, and said the E.U. would stand beside the Cambodian people.

“I will join with you. I will come back with you and go to Cambodia to meet Kem Sokha and try to get democracy back on track, ” Bennion said in the video while standing next to Rainsy and former deputy leader Mu Sochua.

Is the democracy in his country really that good? He should restore [democracy] in his own country.

Arrest warrants have been issued for Rainsy over a slew of convictions in Cambodia’s notoriously political courts.

Sophal Ear, associate professor of diplomacy and world affairs at Occidental College in Los Angeles, however, said the Cambodian government could simply bar Bennion and others from entering the country and still arrest Rainsy.

“I’m not sure it means much for the CPP,” Ear said, referring to the ruling Cambodian People’s Party.

CPP spokesman Sok Eysan said Cambodia welcomes all foreigners except those who are guilty of crimes. But Eysan advised Bennion to stick to his own country’s problems rather than attempting to fix Cambodia.

“Is the democracy in his country really that good?” Eysan said.

“He should restore [democracy] in his own country.”

In February, the E.U. began a process that could lead to the temporary suspension of the EBA due to concerns over human rights and the decline of democracy after the main opposition CNRP was dissolved ahead of last year’s national election.